Why information is its own reward - same neurons signal thirst for water, knowledge

To me, and I suspect many readers, the quest for information can be an intensely rewarding experience. Discovering a previously elusive fact or soaking up a finely crafted argument can be as pleasurable as eating a fine meal when hungry or dousing a thirst with drink. This isn't just a fanciful analogy - a new study suggests that the same neurons that process the primitive physical rewards of food and water also signal the more abstract mental rewards of information. 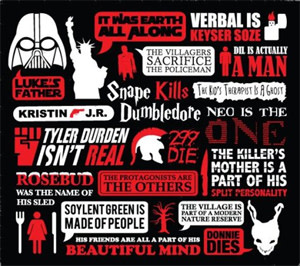 Humans generally don't like being held in suspense when a big prize is on the horizon. If we get wind of a raise or a new job, we like to get advance information about what's in store. It turns out that monkeys feel the same way and like us, they find that information about a reward is rewarding in itself.

Ethan Bromberg-Martin and Okihide Hikosaka trained two thirsty rhesus monkeys to choose between two targets on a screen with a flick of their eyes; in return, they randomly received either a large drink or a small one after a few seconds. Their choice of target didn't affect which drink they received, but it did affect whether they got prior information about the size of their reward. One target brought up another symbol that told them how much water they would get, while the other brought up a random symbol.

After a few days of training, the monkeys almost always looked at the target that would give them advance intel, even though it never actually affected how much water they were given. They wanted knowledge for its own sake. What's more, even though the gap between picking a target and sipping some water was very small, the monkeys still wanted to know what was in store for them mere seconds later. To them, ignorance is far from bliss. 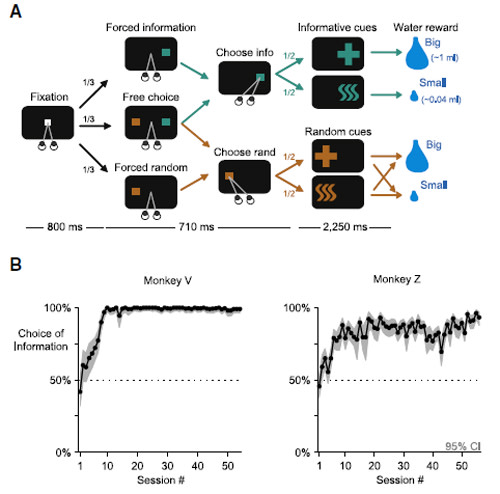 Bromberg-Martin and Hikosaka demonstrated that even more clearly with a second, slightly different task. This time, the monkeys always received information about their watery rewards and the initial choice of symbol simply determined how quickly this information was provided. After a few goes, the monkeys clearly wanted their info immediately. If the researchers swapped the target that provided the most instant information, the monkeys swapped the direction of their gaze.

This preference for knowledge about the future was intimately linked to the monkeys' desire for water. The same neurons in the middle of their brains signalled their expectations of both rewards - the watery prizes and knowledge about them.

All the neurons in question release the signalling chemical dopamine. While the monkeys were making their choices, Bromberg-Martin and Hikosaka recorded the activity of 47 dopamine neurons in their midbrains. These neurons became very excited when the monkeys saw a symbol that predicted a large amount of water, while the symbol that cued a smaller drink inhibited the neurons. The same dopamine neurons were excited during trials where the monkey only saw the symbol that heralded forthcoming information, and they were inhibited if they monkey only saw the other non-informative symbol.

Dopamine neurons are thought to be involved in learning about rewards - by adjusting the connections between other neurons, they "teach" the brain to seek basic rewards like food and water. Bromberg-Martin and Hikosaka think that these neurons also teach the brain to seek out information so that their activity becomes a sort of "common currency" that governs both basic needs and a quest for knowledge.

MindFocal Dystonia: A Musician Overcomes a Movement Disorder With a Change of Mind