Why Getting Gifts for the Holidays Feels Stressful

When it comes to holiday gift giving, reciprocity is the name of the game. But experts say that those expectation can still seem burdensome. 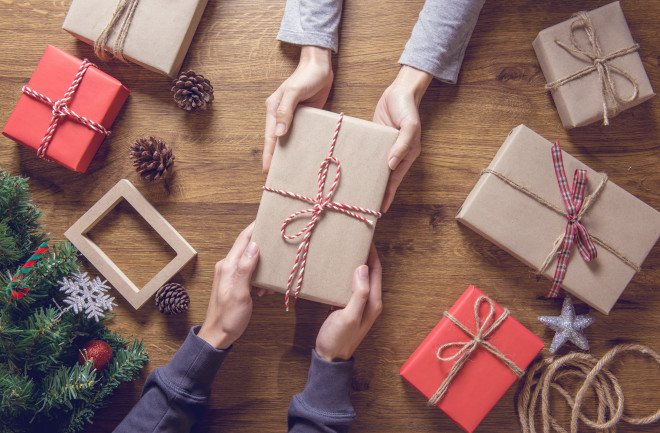 Have you had to deflect any nagging questions from loved ones about what you're getting them for the holidays this year? You're not alone: During December, retail spending is almost double compared to earlier parts of the year, according to the U.S. Census. And studies have found that much of our gift giving is rooted in the obligation to reciprocate. Holidays such as Hanukkah and Christmas are “ritualized occasions,” in which gift giving is meant to strengthen social bonds.

But for many people, the obligation to reciprocate — of the fear of failing to properly reciprocate — can make the exchange feel forced or stressful. And it can be distinctly uncomfortable when we're presented with a gift we didn’t anticipate. “We feel burdened by the process of having to anticipate who is going to give us a gift and the level of that gift because we want to match it,” says Robert Cialdini, a social psychologist and the author of Influence at Work.

Reciprocation anxiety is not based on imaginary fears. Not reciprocating can result in an “appreciation imbalance,” in which the giver feels the recipient does not value them in the same way. Studies have also found that people use the quality of the gift received to “negatively affirm” that the their relationship with the other person is troubled — or in some cases, use an undesirable gift as a signal that the relationship is over altogether.

Thou Shall Not Mooch

The idea of reciprocity is simple enough: you should return a gift or a gesture in kind, Cialdini says. “It’s one that exists in all human cultures. The principle says we are obligated to give back to others who have first given to us,” says Cialdini.

A person who surprises their co-worker with a Christmas ornament will expect a similar, small gift sometime during the holiday season. Similarly, a person who invites a friend to a holiday party will eventually expect some sort of social invite in the future.

In certain situations, delays are acceptable, and people acknowledge that a gesture might not be returned immediately. An invite to a holiday party in December, for example, might not be reciprocated until early February with an invite to a Super Bowl party. During gift exchanges, however, both people are expected to have comparable gifts ready for the recipient at the same time.

Failure to perform in gift exchanges can have lasting social consequences. In his 1954 book on gift giving, The Gift: The Form and Reason for Exchange in Archaic Societies, sociologist Marcel Mauss wrote that the receiver of an unreciprocated gift was deemed “inferior” for failing to meet the gesture. Although Mauss’s language may seem a tad dramatic by today's standards, Cialdini notes that insults like “mooch” or  “ingrates” are still used and intended to negatively label a person who fails to reciprocate.

“We have very nasty names for people who violate the rule, who take without giving,” he says.

These violations of reciprocity are easily observed by others, and can serve as a type of social warning — a behavior also observed in monkeys. Monkeys with larger brains, such as capuchins, were able to tell when others failed to reciprocate, according to a 2014 study published in Biology Letters. Even monkeys with smaller brains, like marmosets, were able to detect unreciprocated exchanges and proceeded with caution among their peers who violated the social norm. The authors concluded that reciprocation is a prosocial behavior that does not require higher-cognitive abilities.

Because there are social incentives to avoid being accused of a reciprocity violation, studies have shown that some people have a greater drive to return any gift or gesture — no matter how small. In a 1971 study, a researcher set up a scenario in which participants thought they were at a gallery to rate art. The actual purpose of the study was to see if they would feel obligated to return a small gesture.

In the gallery, study participants found themselves alone with “Joe,” who appeared to be another participant but was actually a research assistant. At one point, Joe left the room, and on some occasions, he returned with two Cokes and offered one to participants. Later, he asked participants to purchase raffle tickets. Participants who were offered the Coke bought twice as many raffle tickets than those who weren’t offered the beverage.

“What’s interesting is that they didn’t ask for it; they were given [it] and that was enough of an obligation,” says Cialdini.

Similarly, a 2006 study involving restaurant servers found that those who left a small piece of candy with the bill received increased tips compared to those who did not. And a study in McDonald’s restaurants in Latin America found that parents spent 25 percent more on food if their child was given a balloon when they first walked in the restaurant. “They had to give back; they had to reciprocate to the organization that gave to them,” Cialdini says.