Why Do We Procrastinate?

Procrastination deals with how our brains work, according to one theory. 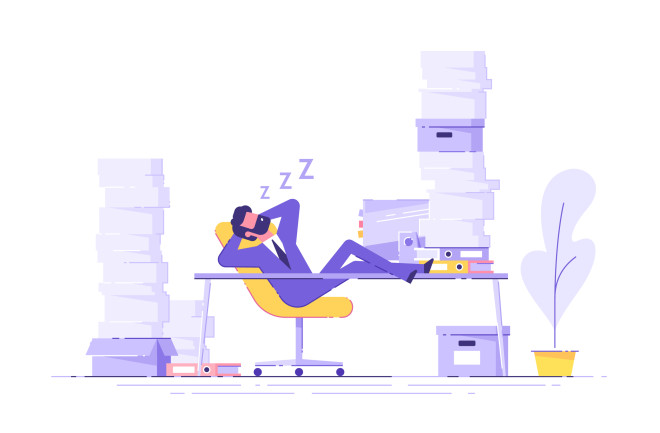 Sleeping business worker with piles of paperwork on their desk. (LanKogal/Shutterstock)

If you’re supposed to be doing something else right now, you came to the right place. After all, if you’re going to procrastinate, what better way to do it than by reading an article about procrastination?

But it’s not just you – even pigeons procrastinate. Procrastination has been defined as “the needless delay of things one intends to do.” But most of us know it as watching cat videos when we’re on deadline.

However you describe it, procrastination is fundamentally irrational. We know putting something off now is going to cost us later, yet we do it anyway. So what makes procrastination so hard to resist? For such a common and vexing problem, there’s not much academic agreement about what causes it. It’s been seen as everything from a time-management problem to borderline mental illness. But it may be just the way our brains work.

Procrastination and the Brain

One way of thinking about procrastination is that it’s a struggle between two parts of your brain. The amygdala, a part of the limbic system, is involved with processing emotions, learning to avoid what might be harmful and to seek what might be beneficial.

Read more: Revenge Bedtime Procrastination Is a Thing. Why Are We Doing it?

On the other hand, the pre-frontal cortex, which evolved much more recently, is all about thinking ahead and planning for the future — which is what you should do if you want to meet the deadline for that project.

The problem is, the prefrontal cortex takes a bit of nudging to get it going, whereas the limbic system is more or less automatic. This means that to get started on that important project, you need to consciously engage with it, decide to settle down and get to work. But once you’ve done that, you’re still vulnerable to limbic system interruptions — the reassuring allure of cat videos.

To make sure you jump right on those feel-good distractions — checking your social media feed, having a brownie — the limbic system gives you a nice shot of dopamine as a reward. The reward for engaging your frontal cortex and buckling down to that looming project comes later, when you finally get the satisfaction of finishing it, or even later than that, when you get a promotion because you did such a great job.

There are many techniques for getting out of the procrastination loop, but one of the most common is using the Pomodoro technique. The technique is named after a tomato-shaped kitchen timer that was common before we all had timers on our phones. (Pomodoro is Italian for tomato.)

You set the timer for a brief period, typically 25 minutes. During that time, you work without stopping. When the timer dings, you get a short break. Every time you take that little break, you’re rewarding yourself for having made progress, not for stopping to check your email. This is basically a way of making sure you get those shots of dopamine for doing what you’re supposed to be doing rather than for doing something else.

Procrastination is the bane of students and writers, as well as plenty of other people who work on long timelines. But it’s not always bad. Though it’s often used as an excuse for procrastinating, some people really do work better under time pressure. This may be because when you wait until the last minute, you’re forced to stay on task. And because the reward is now in sight, you’re less motivated to stray from the task.

According to some research, the right kind of procrastination can even play a role in creativity. After all, Leonardo da Vinci, hardly a slacker, was said to be a notorious procrastinator.

Another potential advantage to procrastination is that, in at least some cases, you might not be procrastinating as much as you think you are. While you’re watching that cat video, your unconscious mind is working away in the background. When you get back to the project, you’ll find that things go much more smoothly, and that might just get you another dopamine fix.