Research suggests daydreaming can bring multiple benefits to the human mind and body. And yet, many humans resist it. 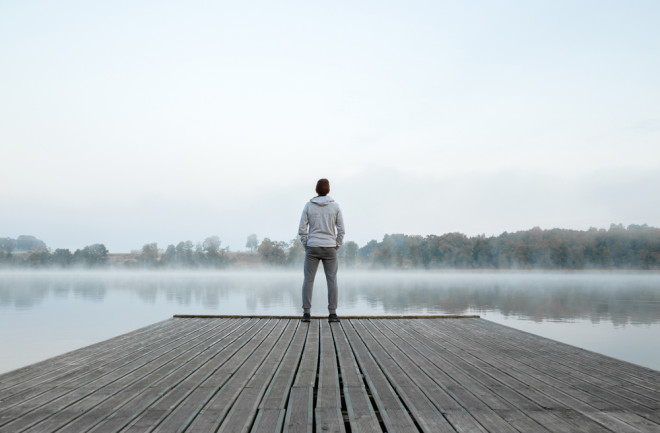 You’re lying back on the emerald lawn, staring up at the night sky with only your thoughts and a few trillion miles between you and the stars. It’s a gorgeous evening and you feel lucky to be alive. Then after a few minutes, you drift from excited daydreaming to more concerning thoughts and a mounting to-do list. An innocent daydream shifts into negativity. The lawn beneath you needs to be mowed, your kids shouldn’t be up this late and you shouldn’t have eaten that second helping of spaghetti at dinner.

Thinking is a funny thing because research has shown that we’re the only species that can do it aimlessly. While other species are capable of solving complex problems and sophisticated analysis, humans are also uniquely wired for daydreaming and withdrawing into our thoughts. We also seem to value it as a civilization, seen in famous statues like Rodin’s The Thinker. But most of us don’t do it enough. In one survey, just 17 percent of Americans said they had spent any time in the last day daydreaming or thinking for fun. In fact, many of us find it rather boring and even painful.

“Our research found that people didn’t tend to enjoy their thoughts,” says Timothy Wilson, a social psychologist at the University of Virginia and lead study author. “We’re usually not willing to put in the effort because we have the allure of so many other things to take our attention.”

In a review of 11 studies published in Science, participants had their cell phones and other devices taken away for a brief period of time, between six and 15 minutes. They were asked to “free think” for that short duration. In some cases, they were given the choice of doing an activity like reading a book, surfing the internet or listening to music. Others were given the choice of administering an electric shock instead of free-thinking. The majority of people would rather do something else than free-think and many would rather hurt themselves. One study even found that 67 percent of men and 25 percent of women would rather give themselves mild electric shocks than be alone with their thoughts for even a few minutes.

It seemed that most people didn’t enjoy the idea of free-thinking because according to the study, participants simultaneously had to think without planning the subject of their thoughts and in most cases they didn’t enjoy it. According to James Giordano, a neurologist at Georgetown University, this lack of “cognitive intentionality” provides too much freedom and can create discomfort for some.

“It makes people feel like they’re not in control,” says Giordano.

Most of us would prefer to be allowed to plan what we’re going to think about beforehand. We feel uncomfortable because of the minds’ egoistic needs, says Giordano. It wants to run the show and when it can’t, it’s painful for some. Even when we’re supposed to avoid thinking, for example in meditation, we’re thinking about not thinking. We always want to direct our minds somewhere and when we can’t, we don’t like it.

Most Likely to Avoid Thinking

Certain personality types, says Giordano, also seem to find being alone with their thoughts harder than others. He says that individuals who are extremely extroverted thrive on social contact, and alone time is not something they enjoy. Those with underlying anxiety tend to ruminate on the more negative aspects of life and low self-esteem lends itself to self-degrading thoughts. But this isn’t true of everyone and we have to be careful not to paint with a broad brush stroke, says Giordano. Many of us are comfortable with our thoughts and that’s a good thing, he says, because free-thinking presents moments of reflection, solitude and deep contemplation.

But even those who aren’t easily amenable to daydreaming can find it pleasurable if they’re willing to put in the work. Wilson says that his most recent research has shown that you can learn to enjoy your thoughts, but it takes effort and motivation. People have to be willing to focus on thoughts that they find meaningful and less trivial and they have to spend time doing it. While meditation can help train the brain to be better at thinking for pleasure, meditation isn’t the same thing as daydreaming. Meditation is about letting thoughts go, while this exercise is about relishing in your thoughts.

Wilson first started his research after going to a meditation session with his wife where the meditation leader kept reminding him to let go of his thoughts “like leaves flowing down a river.” While Wilson sees the benefit of meditation, he didn’t want to let go of thinking. “I like my thoughts,” he says.

Wilson’s research has shown that thinking can be relaxing and even beneficial. Individuals who are more comfortable thinking very often can hone their thinking skills in a way that boosts creativity, self-reflection and the ability to enjoy the present moment.

He contends that thoughts can be fun, imaginative and even an adventure. “I don’t plan on ever thru-hiking the Appalachian Trail, but at night after I close my eyes, I hike it in my mind,” says Wilson. But he never gets too far before he nods off to sleep.