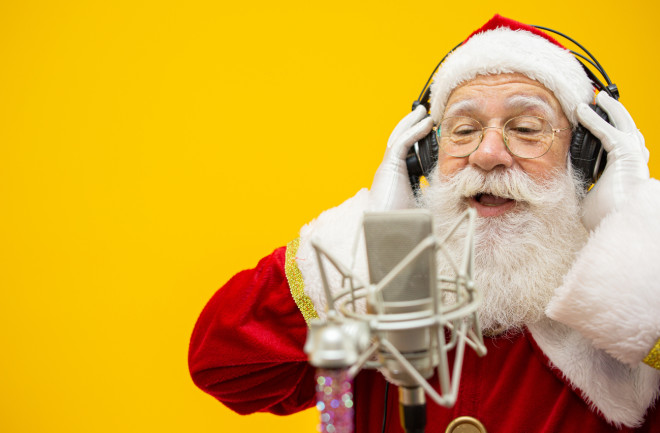 It’s one of the most distinctive (or inescapable, depending on your perspective) elements of the holiday season: Christmas music. The familiar collection of sentimental tunes begins to take over airwaves and filter through coffee shop speakers around Thanksgiving weekend and essentially becomes the soundtrack for the entire month of December. But what is it that makes Christmas music so distinct? While in some ways it might seem obvious, there are a few surprising characteristics of holiday songs that tell us as much about ourselves as our winter traditions.

Joe Bennett, a forensic musicologist at the Berklee College of Music in Boston, attempted to answer the question back in 2017. He looked at the lyrics, tempo, vocals and other elements of the 78 most-streamed holiday tunes on Spotify. The most obvious aspect of what makes a Christmas song is, of course, its lyrics — and Bennett found that the words used in these songs fit broadly into eight key themes including “home,” “in love,” “party,” “Santa” and “snow.” But the concept that connects all the themes, according to Bennett, is nostalgia.

“The world of a Christmas song, in terms of visual imagery, is the in-person, analog world: firesides, snowfall, presents under the tree,” he says. “Even though people are selling iPhones and PlayStations at Christmas, you don’t get that content in the lyrics.”

Happy Sounds for the Holidays

That nostalgia can be found in the technical aspects of the music, as well. Of the songs Bennett analyzed, 95 percent were in a major key. “Major keys in pop music are kind of more dated,” he says. “In contemporary pop, the repertoire skews more toward a minor key.” Bennett adds that the dominance of the major key in Christmas music partly reflects the preference for “happy themes” during the chilly holiday season.

Darren Sproston, director of the School of Arts and Media and deputy dean at the University of Chester in England, has delivered a series of lectures about the history and character of Christmas music. He points out that this preference for up-tempo holiday can be traced back to traditional carols, written for congregational performance.

“People have got to pick up the melodies quite quickly so they can sing them in that community setting — but that’s also true of popular music and the hooks meant to draw in an audience so they have that ‘singability,’” Sproston says. Whether it’s “O Come, All Ye Faithful” or “Santa Claus is Comin’ to Town,” holiday songs work best when we can sing along to them as a group.

Bennett found the median average beats per minute (BPM) for these songs to be 115 — slightly below the average of popular music, which tends to be 120 — and 90 percent were in 4/4 time (also not too different from most other pop music). Additionally, 38 percent of the songs included sleigh bells and 35 percent used a broken triplet rhythm, or “swing rhythm,” that has a shuffle sound. (Think of the cha-chung-cha-chung-cha-chung that keeps toes tapping throughout Mariah Carey’s “All I Want for Christmas Is You.”) This was a popular device during the 1950s and ‘60s, particularly in the holiday songs produced by Phil Spector, whose 1963 album A Christmas Gift for You from Phil Spector in many ways set the template for modern pop Christmas music.

Sproston notes that tubular bells (which evoke the sound of church bells) are also a distinctive element, as well as choral singing. “As soon as you introduce a choir, especially a children’s choir, you get that level of Christmas-ness,” he says. He points to Pink Floyd’s “Another Brick in the Wall,” which few would consider a Christmas song, that nonetheless topped the UK charts during Christmas week of 1979 — perhaps helped by its use of choral singing.

Our Need for Nostalgia

Another key characteristic of Christmas songs is that they are, with rare exception, the same songs year after year. Those rare tunes that break through and become “new classics” usually do so by borrowing blatantly from the Christmas canon. The most obvious example may be Mariah Carey’s ubiquitous hit, which “takes so many of those 1963 Phil Spector production values and adds what at the time was a 90s contemporary spin,” as Bennett puts it. Beyond borrowing from the Spector playbook, the song even incorporates some chords from “White Christmas.”

A more recent example of this new-borrowing-from-old can be found in the work of Michael Bublé, whose songs counted for a full 13 percent of those that Bennett analyzed. “Most of those [borrowed] songs are from the Big Band Era of the 1940s, ‘50s and ‘60s,” says Bennett. “It’s the sound of the Rat Pack, but Michael Bublé uses autotune on his voice and strikes this perfect combination of contemporary pop production values and traditional musical arrangements and songwriting allusions.”

One of the biggest holiday songs of this year, Ed Sheeran and Elton John’s “Merry Christmas,” might be new, but it succeeds by sticking to the formula. “They threw the book at that one,” Bennett says. “It’s got every cultural reference — fireside and mistletoe, plus the sleigh bells, naturally.”