Go Ahead, Get Yourself Something Nice Over the Holidays, Too

The holiday season can be a stressful time, but new research suggests that self-gifting may help boost your mood — and it's particularly effective when you're already feeling strained. 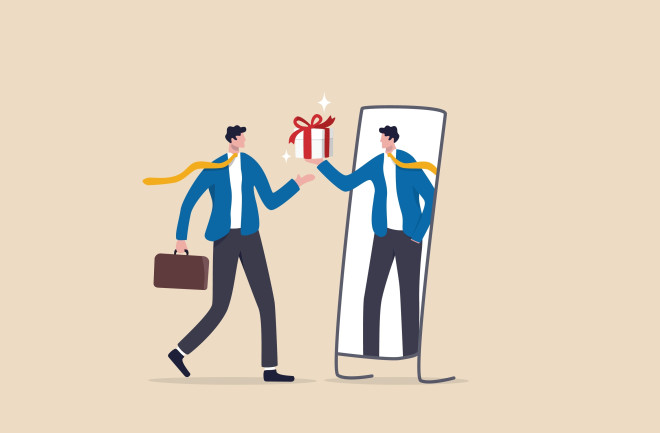 ‘Tis the season … for being stressed, that is. The holidays, joyful as they can be, can also be emotional powder kegs simmering with worry and feelings of constraint. A 2021 report by the American Psychiatric Association surveyed 2,000 adults and found that 41 percent reported an increase in stress this time of year. The reasons for the uptick in anxiety are plentiful: financial pressures, gift-giving worries and family tensions, to name a few.

Whether it’s from demands at work, home or even a hectic holiday season, people who are already feeling tense tend to not reward themselves with new gifts or experiences, according to a recently published study in the Journal of Consumer Research.

“When we’re short on time, money and energy, we see a self-gifting opportunity and we think, 'I would not really be able to enjoy that. I would not be able to enjoy those relaxation benefits that it’s supposed to be giving me,'” says Jacqueline Rifkin, the study’s lead author and an assistant professor of marketing at Cornell University.

But the new research also suggests that those moments are precisely when we might benefit the most from, say, a cup of coffee or a massage. Its authors found that when stressed participants took the time to self-gift — meaning they treated themselves with a small gift or indulgence with the specific intention of boosting their mood — they reported feeling happier, more relaxed and less strapped for time.

“You actually end up feeling like you’ve gotten a little bit of time back,” says Rifkin, “because you’re a little bit more rejuvenated.”

Read More About the Science of the Holiday Season:

The Case for Self Gift-Giving

Over a series of experiments, Rifkin and her colleagues examined how time, money and social constraints can steer us away from self-gifting. In one, they showed participants an advertisement for a fake product — a bar of soap, a pair of headphones or a pack of biscotti — and gauged their interest.

For half of the people surveyed, the researchers also added a self-gifting tagline ("carve out me-time" or "create a special moment") that suggested the product be used specifically for mood repair. They found that participants who felt tense about tight budgets, overpacked schedules or overly long to-do lists were less interested in the items with self-gifting hooks. When asked why, these respondents suggested that they wouldn’t be able to savor the experience enough to derive any mood-boosting benefits.

Next, the scientists set out to challenge those assumptions: Several follow-up experiments tasked participants with self-gifting to see how it impacted their mood — and found that even people who were initially feeling stressed were indeed happier and more relaxed after indulging.

The unfortunate irony of those results, adds Rifkin, is that they suggest many of us are potentially undermining our own happiness by assuming we won’t benefit from these experiences when we’re tense or busy. “But it’s really eye-opening, because it’s now clear to me what the thought process is,” she says.

Critically, Rifkin adds that self-gifting doesn’t necessarily have to mean reaching for your wallet. “A lot of us think of going out and doing retail therapy, like buying shoes to celebrate or cheer yourself up,” she says. “And some people really do derive a lot of joy from that. But for me, engaging in experiences is a form of consumption, like going out in nature. These things that are more ephemeral totally count as self-gifts, as long as we’re doing it for ourselves and our wellness and not for anybody else.”

In short, as you’re checking off the rest of your to-do list this week, don’t forget to take a moment to treat yourself, too.