What Magic Can Teach Us About the Human Mind

Why do we fall for magic? The secret lies in clever psychological tricks that exploit gaps in our brains. 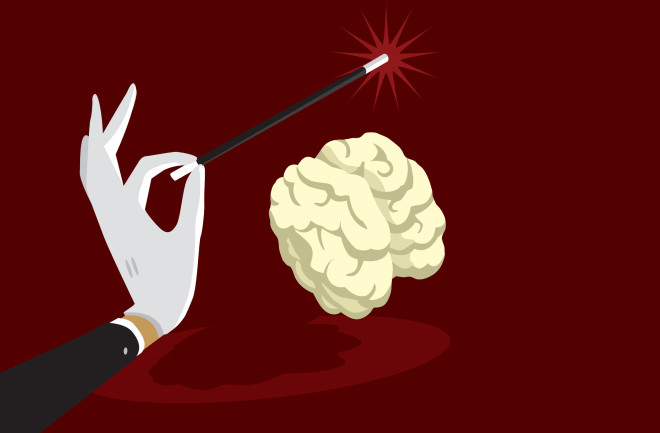 The Amazing Abner swirls his cape, waves his wand, and pulls a rabbit out of a hat. Polly Presto makes her assistant disappear while inside a locked cabinet. The old guy in the park pulls a coin from behind your ear. You know there’s some kind of a trick, but it looks so real. How do they do it?

There’s Science Behind the Art

Magic is an art form, and magicians don’t easily reveal their methods. But over the years they’ve shared the secrets behind a few of the traditional tricks. For example, in a 2010 YouTube video, the magic act Penn and Teller demonstrate what may be the most classic of stage magic illusions: cutting an assistant in half. Of course they do it with that special Penn and Teller touch, which makes the whole thing even more “Wow! How did they do that?” (and much funnier) than when they started.

Though magicians do use props, such as cabinets with hidden mirrors and stacked decks of cards, those things aren’t what make the tricks work. The real magic is in the minds of the audience, and the art of the magician in manipulating those minds. Because when you look closely at magic, you find neuroscience.

Your grasp on reality is weaker than you think

Ronald Rensink is a professor of psychology at the University of British Columbia in Vancouver. He specializes in visual attention and is one of the pioneers of scientific study of magic. “Penn and Teller, say, can [trick] thousands of people at the same time; the tricks are that reliable,” says Rensink. This suggested that the effect is based on something central to the way human minds works.

One thing Rensink and others discovered when they started studying the science of magic is that magicians take advantage of the very odd (and maybe slightly creepy) fact that what we see is not actually what’s out there.

“Your visual system sees clearly only about 1/1000th of the entire visual field," explains Stephen Macknik, a neuroscientist at SUNY Downstate Medical Center, also a pioneer of the scientific study of magic. 'That’s about the size of your thumbnail held at arm’s length. The rest is very low-resolution."

So how do we see the big picture? Our brains makes most of it up. That is to say, the brain fills in what’s missing based on previous experience and some logic, seeing basically what it expects to see. Or as Macknik, puts it, “Almost everything you see — 99 percent or more — is fabricated by your brain. It's an estimation of what's actually happening out there.”

It’s a good estimation, too. Otherwise, we’d forever be walking into walls and tripping over the furniture. But it’s not perfect. “A magician can turn that against an audience,” says Rensink, “and create a reality that's very very different from what's in front of them. A good magician can basically control a good chunk of how your brain interprets things.”

People often say that magicians use distraction to keep audiences from seeing how they do the trick. But it’s more complex than that. “What they do is direct attention very skillfully away from the secret method,” explains Susana Martinez-Conde. Martinez-Conde, also a neuroscientist at SUNY Downstate, is a leading expert on the neuroscience of vision (and is married to Macknik). Here again, the brain helps the magician.

In 1999, cognitive psychologists Christopher Chabris and Daniel Simons set up a now-famous experiment in which subjects are asked to watch a short video of a basketball game and count how many times the team wearing white shirts pass the ball. Roughly 50 percent of subjects failed see that while they’re counting passes, a person in a gorilla suit strolls across the center of the court, even stopping in the middle for a little theatrical chest-pounding. You can try this yourself, and if you really try to accurately count the passes, you probably won’t see the gorilla, even though you know to expect it.

This attentional blindness, as it’s called, is gold to a magician. By getting the audience to focus on one particular thing, magicians can cause them to not see what they don’t want them to see. In Macknik and Martinez-Conde’s 2010 book, Sleights of Mind: What the Neuroscience of Magic Reveals about Our Everyday Deceptions, they describe a vanishing coin trick by Juan Tamariz, a master magician from Spain. Tamariz directs the audience’s attention to his empty left hand. In that split second while the audience has followed his gaze to his left hand, he holds up his right-hand palm toward the audience. The coin is there in his palm, but no one sees it.

One reason these tricks are so reliable is that the brain doesn’t simply enhance what it’s paying attention to at the expense of everything else. Martinez-Conde and Macknik, working with colleagues at SUNY and University of Connecticut, discovered that the primary visual cortex actively suppresses everything else.

The Wonder of Magic and the Human Mind

Because scientists know so much about how the mind works, they must be hard to fool, right? Not really. Scientists and other professionals, too, tend to be very good at focusing, says Rensink. That makes it easier to direct their attention. However, there is one group that is much harder to trick: children. Kids are notoriously poor at directing their attention, and that poses a real challenge for magicians hoping to focus it for them. “Among magicians, the ones who work with kids are the most respected,” Rensink says.

This also poses some interesting questions. Are people with attention deficit disorder more resistant to magic tricks? How about people with autism? Figuring out what types of tricks work on people with various kinds of neurological systems could help scientists understand more about these conditions.

But in the end, says Rensink, for scientists, for kids, for anyone who enjoys magic, it’s all about wonder. The wonder of magic, and the wonder of the human mind.