What Explains Sleep Paralysis and Visions of a Demon on Your Chest?

You’re awake, but you can’t move. And what’s that shadow moving toward you? Sleep paralysis is a perplexing disorder, but sleep scientists have made some headway toward understanding its causes and how to stop it. 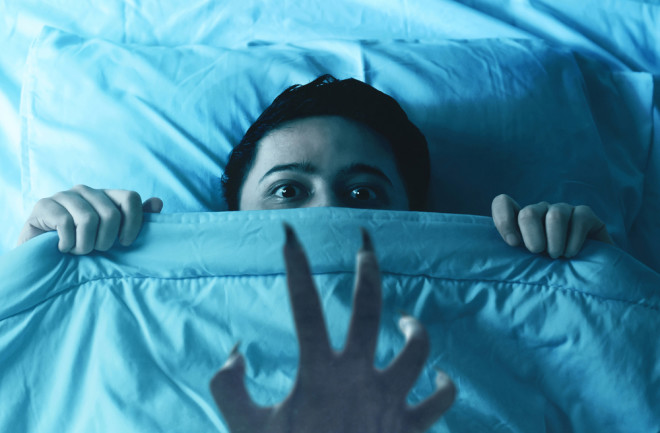 In Italy, it appears as a witch, a ghost or, sometimes, a horrid humanoid cat. They call it the Pandafeche; and a broom placed beside the bedroom door supposed helps ward it off. In Newfoundland, it’s known as the Old Hag. The Inuit, however, interpret the phenomenon as a shamanistic attack. And in Brazil, the Pisadeira is described as “a crone with long fingernails who lurks on roofs at night and tramples the chest of those who sleep on a full stomach with belly up.”

These represent a small sample of the many folkloric interpretations of sleep paralysis, a parasomnia (or sleep disorder) in which a person is fully awake and aware but cannot move or speak. It’s often accompanied by the perception of a sinister presence, vivid hallucinations and a feeling of suffocation. Some people may even feel a sense of impending death.

Sleep paralysis is distinct from nightmares, but the two do share an etymology. The Old English word mare denoted an oppressive spirit (tormenting women in male form as the incubus, and men in female form as the succubus) that sat upon the chests of sleepers, hence the suffocation. Researchers now believe the mare was inspired by sleep paralysis. The connection is clear in Henry Fuseli’s 18th-century painting, The Nightmare, where a goblinesque figure crouches atop a woman’s sprawled, inert body.

Given its ghastly symptoms, it's understandable how our ancestors might attribute sleep paralysis to demonic forces. But sleep scientists have concluded that it’s actually a normal part of the sleep cycle that sometimes, abnormally, occurs in the semi-conscious moments before and after sleep. Some have referred to it as a mixed state of consciousness. A bout usually lasts seconds or minutes but can persist for longer.

The loss of muscle control is called atonia, and it, too, has its rightful place in Rapid Eye Movement (REM) sleep, the phase in which most dreaming occurs. Brain signals reduce our muscle tone, inhibiting motion and preventing us from acting out our dreams. Only when atonia lingers into wakefulness do we become aware of the distressing inability to move.

One 2011 study found that about 8 percent of the general population experiences sleep paralysis, though the rates are much higher — around 30 percent — for both students and psychiatric patients. For some, isolated sleep paralysis instances happen rarely. But others suffer from recurrent sleep paralysis, which is typically associated with narcolepsy, or overpowering daytime drowsiness.

Even the malevolent, phantasmic images that plague these fitful sleepers have an earthly explanation. They’re called hypnagogic hallucinations when they occur just before sleep, and hypnopompic when they happen after waking. They can include not only visual but also auditory hallucinations, as well as bodily sensations, like floating or feeling pressure.

The framework through which different cultures interpret sleep paralysis may also alter the way their members experience the disorder. One study found that it is far more common in Egyptians than Danes, and that those Egyptians who attributed it to supernatural causes also feared it more. In an unfortunate cycle, if this anxiety causes people to avoid sleep, it can exacerbate the problem and spawn more episodes.

Despite the physical and psychological toll of sleep paralysis, it remains a little-understood phenomenon. Its causes are unclear, but research has linked it to stress, sleep deprivation, excessive alcohol consumption and even leg cramps. There’s also a strong correlation between sleep paralysis and other sleep disorders, like narcolepsy and obstructive sleep apnea, a condition characterized by interrupted breathing.

By itself, sleep paralysis seems to be harmless. But when people eschew their beds to escape nighttime horrors, there can be a cascade of negative health consequences linked to sleep deprivation.

The treatments for sleep paralysis, like its causes, call for more investigation. In some cases, doctors may attempt to treat the associated conditions, like narcolepsy and sleep apnea. But in others, the simplest option may be to improve sleep habits and get at least seven hours of restful sleep each night. Poor sleep quality seems go hand in hand with sleep paralysis, so for many, healthy sleep is likely the best defense against that dreadful mare of the night.