What a Hospice Physician Who Interviewed 1,400 Patients Can Tell Us About Dying

Visions and vivid dreams are end-of-life experiences that are seldom talked about. They often include reunions with deceased loved ones — and can provide dying patients with profound comfort. 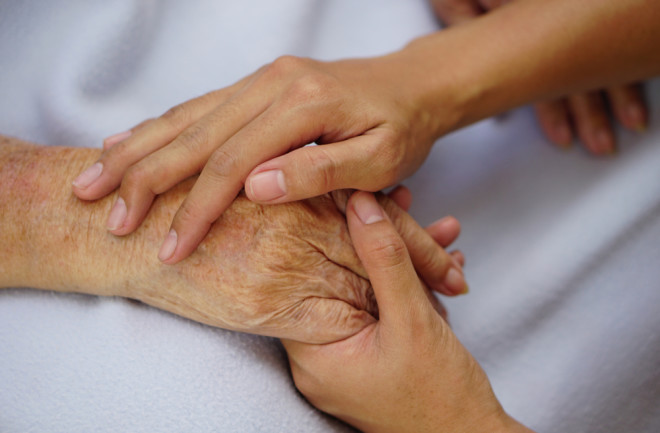 When hospice physician Christopher Kerr first started moonlighting at Hospice & Palliative Care Buffalo in 1999, hearing about the powerful dreams and visions that dying patients often had made him uneasy. But it didn't take long for Kerr to realize that these inner experiences could be profoundly therapeutic — not just for the patients, but for their families, too. "They were undeniable," says Kerr, now CEO of Hospice & Palliative Care Buffalo. "They couldn't be ignored, and they had worth."

To better understand these end-of-life experiences, or ELEs, Kerr has interviewed more than 1,400 dying patients. The stories he collected at their bedsides are featured in his 2020 book, Death Is But a Dream. They also informed seven published studies, tackling topics like post-traumatic growth and the ways that ELEs can help bereaved loved ones process their loss. In the days, weeks and even months leading to their deaths, Kerr and his team found that patients had visions of reunions with deceased relatives, dreams about travel and vivid memories of past experiences. More than 60 percent of the patients found them to be comforting.

Kerr hopped on a call with Discover to talk about the paradox of dying, how ELEs evolve as patients near the end of their lives and the ways that research like this can influence how we approach death as a society. (This interview has been edited for length and clarity.)

Q: What kinds of attitudes and perspectives do you see among patients who are nearing the end of their lives?

There’s a significant amount of misinterpretation from the outside. We have this natural, visceral response to the dying process, which is understandable, and actually critical to survival. And I think when we project ourselves onto that space, we think of the news of finding out that you have a terminal illness — that almost always comes as a true shock.

But what happens to people who are truly dying, after a protracted illness, is an entirely different level of acceptance. It comes from a number of things. Physically dying — being sick — is hard work; it’s exhausting. So there is this willingness to give into that process. And it tends to look after itself in ways that people don’t imagine. Our fear of pain, for example, is grossly overestimated. And the majority of people do find comfort and meaning in death.

Dying is this paradox where you’re physically declining, but spiritually, you’re very much alive. People who are having end-of-life experiences, who are the majority of people, are actually showing positive signs of growth, gaining insight and adapting right to the end. The point is that we view dying as this medical phenomenon when it’s ultimately just this human experience that is very rich. It’s more than organ failure. We’ve medicalized it and sterilized it to the point that it’s been dehumanized. There’s a much broader story.

Q: How do you define end-of-life experiences?

It’s really those subjective experiences at the end of life. Those inner experiences. The nomenclature gets really tricky because the only reference point we have is to call them dreams. But what’s interesting is that the patients themselves will say, “No, no, I don’t normally dream.” So they’re described as more unlike than like dreams, but that’s what we call them. We use the term visions in our studies because people say that they’re awake. But it’s not like we walk in and people are seeing things around the room. I think what’s happening is that they’re probably lucid dreaming.

There’s two commonalities to the dying process — you eat less and your sleep architecture has changed. So you’re in and out of sleep states. It may be that they’re lucid dreaming.

Q: Are patients lucid when they're having these experiences?

First of all, these are IRB [International Review Board], university-approved studies and the consent process is pretty intense. There has to be a witness and you have to be aware of risk, ramifications, all those things. It’s a heavy document. The other thing is that we used this method called the CAM [Confusion Assessment Method], which is a clinical tool to rule out delirium. In the early piloting studies, we did labs, we looked at meds lists and we filmed a lot of people, so you could see that they were functional.

A very important distinction is that vantage point is everything; we’re not talking about the moments and hours before death, where you’re literally talking about a deoxygenated brain and altered states are more common. We’re talking about screening by days, weeks and even months before death. Some of these people are driving, doing their taxes and living alone. These people don’t have compromised neurologic functions. You can’t attribute it to neurotransmitter flux or anything like that. These are people who are highly functional.

What was really important was that we did this daily. Because we knew that there was a detectable change as people got closer to death. So what happened to the frequency? And what happened to the content? And the end story is that nearly 90 percent of people, within the days and weeks before death, have at least one of these events that are defined by being extraordinarily real and profoundly meaningful. They increase in frequency as people get nearer to death.

What’s interesting is that the subject changes; the content changes. The closer you get to death, the more likely you are to see people who are deceased and who you loved.

Q: Tell me more about these dreams and visions.

What seems to happen is that there’s this progression where people almost have an affirmation of having lived, and it lessens the fear of death. The stories are just remarkable. Even the negative ones are probably the most transformational or meaningful. Somebody, for example, had PTSD, in his end-of-life dreams he was comforted by seeing soldiers that he felt survivors’ guilt from. And then he could sleep. He found peace.

What was also fascinating was who was in the dreams. And, far and away, it was the people who loved or secured us best; who loved us unconditionally. You could be 95 years old, but it could be your mother’s voice from when you were five that you’re hearing. It’s really quite profound.

Q: What differences did you find from patient to patient? People tended to die as they lived. If you had tortured, distressed, tragic elements to your life, these processes didn’t deny that. And they don’t deny death; they almost transcend it.

I’ll give you an example: A mother who had a child who had addiction issues and ended up in prison. Her identity as a mother was questioned by herself. In her end-of-life experience, her parents came to her and told her she was a good mother. And a guy who lost his arm in childhood was wondering how he was going to be and live autonomously. He ends up working and people who he worked with came to him during his end-of-life experience and told him that he was the best at what he did.

There’s variance in as much as it’s individualized to that person. There’s certainly no one-size-fits-all.

Q: You published a study on ELEs and post-traumatic growth. What does trauma look like for people who are dying?

It’s based on the presupposition that dying is an adverse event. And even if you are accepting of dying, there is adversity, obviously, in the form of loss and anticipatory grief and pain. I don’t think the analogy is wrong to talk about it traumatically. But then the question is whether there’s value in something that is, by definition, negative.

It really inverts our idea of dying, which is this idea of a lessening. Which is clearly what we experience as observers — we’re seeing physical decline and change. But what we don’t see is the experiential piece, which is going in the other direction. The fact that we were able to show that these experiences led to growth, right up until the last days of life, I think is just really remarkable.

Q: Wow. For me, that’s really a new way to think about death — that you’re growing, spiritually, while you’re physically declining.

It’s funny. Other cultures don’t look at it that way. I was contacted by a colleague, an Emmy-award winning filmmaker, and she’s working with indigenous people in the Amazon. And we’ve heard of this, anthropologically, but she said, ‘What you’re describing, these people have a whole language for.’ It’s a very common way for cultures and societies throughout history to maintain their ancestral ties. They experience death differently; they’re sad, but they’re not feeling like there’s this loss. It’s interesting. Q: How do these experiences impact caregivers and loved ones?

We have published two studies based on surveys and interviews with 750 bereaved family members. We looked at scales of grief, and it showed that what was good for the patient was good for their loved ones. People who had witnessed these very positive experiences absolutely transitioned through grief and loss differently. They had better remembrance of the event.

It makes sense. How we experience and visualize somebody leaving us absolutely impacts our ability to process that loss.

Q: Does this research change your perspective on how people can better care for — and relate to — loved ones who are dying?

Dying is inherently isolating. And we’ve dehumanized it in so many ways. Yet this serves as one mechanism by which we can humanize what is a very human experience. What this research does, I hope, is take dying from being viewed as organ failure to the closing of a life. We are so much more than failing parts. I think what’s important, on the caregiving side, is giving hospice patients the permission for these experiences to be expressed. And the bereaved are typically a part of that story, so it feels like people are brought together.

Q: Can knowing about these experiences help people who are in hospice prepare for death?

Yeah. And we’re seeing that. It’s interesting. People who live to their eighth decade have often observed this. So they go into the dying process with hopes of reunion. It’s remarkable. It really depends on their life experiences, but it absolutely informs how people face the end of their life.

Q: How can this kind of research inform how we approach death, culturally?

I think we need to reclaim it. I don’t think the solution is a medical one. Dying, generations ago, was a shared experience between a family or a town. That’s a healthier approach. And I think we’re seeing that in the baby boomer generation  — we’ve really gone from death aversion to people wanting to have a say. You see death doulas; you see death cafes; and books on death sell.

As people are looking at their own mortality, and we are a consumer culture, people want ownership of it. They don’t want to be medicalized by the doctor. They want to have a say in their story.

Are Rocket Scientists and Brain Surgeons Any Smarter than the Average Person?