Well, Hello There! Fish Recognize Themselves in the Mirror 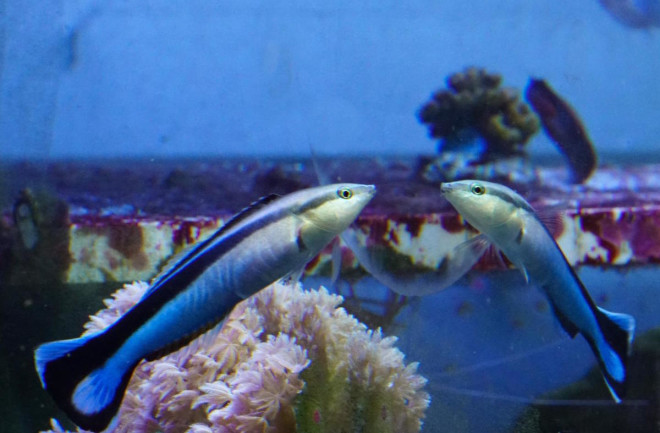 A cleaner wrasse fish checks itself out in the mirror. (Credit: Alex Jordan) When it comes to intelligence, fish get a bad rap. They’ve been plagued with the five-second memory stereotype, and thanks to Dory, are thought to “just keep swimming.” But a new study suggests that they might be smarter than we think. Research published today in the journal PLOS Biology shows that fish can recognize and respond to themselves in the mirror. When met with their own reflections, a species of fish called the cleaner wrasse identified and attempted to remove marks on their bodies. This ability, proven through the mirror self-recognition test, is regarded as a hallmark of cognition and self-awareness. Thought to exist in a handful of intelligent creatures, the study suggests that a slew of other species could also possess this trait. The findings call into question, though, our method of measuring and categorizing self-awareness.

To See or Not to See

Humans have gazed at their reflections for millennia, recognizing and interacting with their spitting images. As years went on, researchers started to wonder if other species could recognize themselves, too. To find out, they implemented the mirror test, where a colored dot is marked on the body and the subject has to touch or examine it in the mirror. This shows that they perceive the reflection as themselves. Despite numerous trials, only a few species have passed this test, including great apes, elephants, dolphins and magpies. But recently, a team of researchers from the Max Planck Institute for Ornithology and Osaka City University found unexpected success. They used this test on cleaner wrasse fish, a species that swims through coral reefs and eats parasites off of marine life. Researchers placed the fish in mirrored tanks and watched as they slowed down, stopped and even swam upside down when faced with their reflections — behavior that wasn’t seen in mirrorless tanks. The scientists put colored dots on either the fish's heads or throats, which are parts of the body they can't see without a mirror. Once back in their mirrored tanks, the fish turned to face their colorful dots. After looking at the unfamiliar marks, they tried to remove them by rubbing up against hard surfaces. Those in mirrorless tanks, on the other hand, didn’t try to remove their marks. This suggests that the fish were responding to what they saw in their reflections.

Despite passing the mirror test with flying (or swimming) colors, researchers are hesitant to call the fish self-aware. "The behaviors we observe leave little doubt that this fish behaviorally fulfills all criteria of the mirror test as originally laid out. What is less clear is whether these behaviors should be considered as evidence that fish are self-aware — even though in the past these same behaviors have been interpreted as self-awareness in so many other animals," explained the study’s lead author, Alex Jordan of the Max Planck Institute, in a statement. Current theories say that species are either self-aware or not self-aware, without much wiggle room in between. But the researchers question this black and white viewpoint, and think that it could exist on multiple levels. Instead of adding fish to the same cognitive pool as humans and apes, they could be in a category all their own. To better measure cognition across all species, and to see if it does exist on a sliding scale, researchers will have to think beyond the mirror test. But until then, fish will have to just keep swimming.