It's Complicated: The Lives of Dolphins & Scientists

In the escalating war over dolphin rights, two pioneers in the study of cetacean consciousness have sacrificed their decades-old friendship for their beliefs. 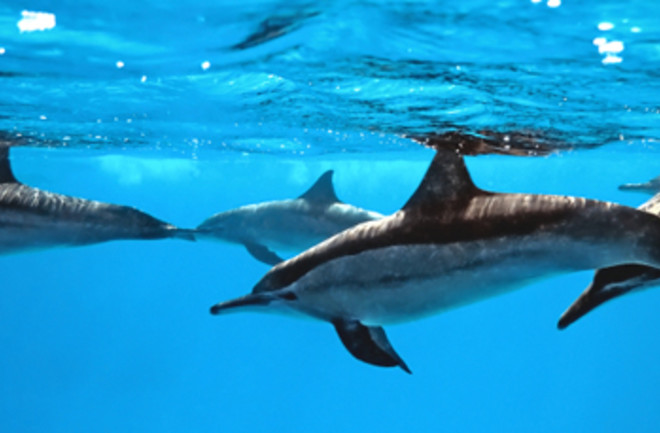 The conference was winding down, and most attendees were heading home. But at a far end of the convention center in downtown San Diego last year, one room had drawn a late crowd: Two preeminent cetacean scientists were arguing that dolphins were too smart, and way too much like us, to capture or kill. At the high-profile annual meeting of the American Association for the Advancement of Science, conferring what amounted to personhood on dolphins was a professionally risky act.

Lori Marino, a neuroscientist and cetacean expert at Emory University, kicked things off, her soft features belying her outsize thesis: Pound for pound, dolphins are better endowed with gray matter than most primates, falling just short of humans, and the neocortex of their brain is just as complex as our own. Marino’s former mentor and close friend, Diana Reiss, a dolphin researcher at Hunter College in New York City, spoke next. Kinetic where Marino was calm, her jet-black hair contrasting sharply with Marino’s gentle brown, Reiss spoke in more urgent tones. She described her seminal work, conducted with Marino, showing that dolphins could recognize themselves in a mirror, evidence of self-awareness seen until then only in primates and elephants. Treating such creatures as little more than seafood with blowholes was no longer acceptable, in her view. “We face an ethical impasse,” Marino said.

Much of the audience arrived already receptive to the message. A shocking documentary called The Cove, which would win an Oscar two weeks hence, had already alerted the world to the practice of rounding up dolphins by the thousands and hacking them to death, preventing them from competing with fishermen in the Japanese town of Taiji. At the end of the talks, Reiss dimmed the lights and amped up the mood with an even grittier sequence shot by the German advocacy group Atlantic Blue: Dolphins were dragged behind a big blue tarp in bundles held together at the tail, like bananas. Japanese fishermen shoved three-foot poles through the backs of their heads and then pushed wooden dowels into the wounds. The dolphins were already dying, but the dowels stanched the telltale blood that would otherwise drench the lagoon.

After the clip ran, one scientist stood and declared in a huff that activism had no place in science. But others lingered for hours, discussing the concept that dolphins were people—not quite like us, but people all the same.

Later that evening, Marino and Reiss met for drinks at a local hotel. For 20 years they had worked together, turning the study of dolphin cognition into a legitimate branch of science. As part of a tight community of serious marine biologists, they had helped rescue their fledgling field from New Age ignominy, fiercely imposing rigor where pseudoscience once reigned and proving that dolphins possess a complex intelligence comparable to our own. But as with some of their predecessors—researchers long since rejected by the broad scientific community—Marino and Reiss risked being branded as extremists or flakes. By 2010 the dolphins, too, had been their friends for decades. As the night wore on, the two scientists returned to the topic of the Japanese drives. The science had led them here, they said, and advocating for the dolphins was their only moral choice.

The meeting in San Diego may have seemed like the beginning of a new era in the battle for dolphin rights, but for two close friends it marked an end. By the time the year was out, the relationship was fractured, with Reiss insisting that science often required working with captive dolphins, regardless of their intelligence, and Marino calling that viewpoint morally wrong. Marino was so offended by Reiss’s stance that she wrote a letter to The New York Times calling her a hypocrite. For Reiss and Marino the break has been personal, but for science it forces out into the open a deep professional question: How close can a scientist get to her experimental subjects or her fellow researchers before objectivity itself disappears?

Reiss and Marino grudgingly say that their story starts with John Lilly, the self-professed father of “dolphin­ology,” an iconoclastic voice of the New Age and a notorious crosser of lines in science himself. Back in the 1950s, Lilly was a National Institute of Mental Health neuroscientist who dabbled in isolation tanks, darkened chambers of lukewarm water in which a test subject—often Lilly himself—could float serenely, completely cut off from the outside world. It was Lilly’s isolation experiences that led to his obsession with bottlenose dolphins, animals he assumed must live in a permanent floating state. Lilly did some of the first work in dolphin intelligence. He insisted that “interspecies communication” was possible and hoped to teach the animals English. To that end, he relentlessly recorded their whistles, clicks, and piercing screams, which he incorrectly compared to rapid human speech. In 1961 Lilly published Man and Dolphin, the first of his many popular books holding that dolphins were not just intelligent but nearly human.

To achieve human-dolphin discourse, Lilly believed, Homo sapiens and Tursiops truncatus had to share their lives. By 1965 he had sealed a house in the Virgin Islands so that the bottom few feet of several rooms and a balcony overlooking the ocean resembled a huge bathtub. Then he pumped in 22 inches of seawater, enough to provide a shared abode for his human assistant, Margaret Howe, and a dolphin named Peter. Howe grew increasingly isolated and depressed while Peter tried to knock her down and mate with her, and the experiment ended after 10 unsanitary weeks.