"Go" and "want" might actually be more useful than "dog." 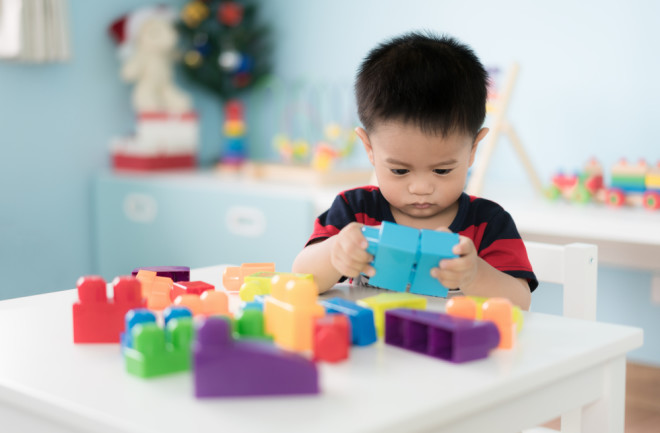 What were your first words? Odds are, if you grew up in the United States speaking English, these words were nouns. Nouns like mama, dada, a favorite animal or food (or “lawnmower,” if my father is to be believed). But in languages like Korean and Mandarin Chinese, babies’ first words are more often verbs like “go” and “want.”

New research suggests these differences in early word learning might lead toddlers down different paths toward understanding relations between objects. For example, children struggle with learning relationships like right and left. They might be able to apply it to their hands but not know their right foot from their left foot. And that’s a key part of higher-level reasoning.

The new finding means that the language you speak and the culture you grow up in might shape your ability to recognize similarities and differences, like noticing that dogs and cows both have four legs and a tail but are different kinds of animals. Past work had already shown these also shaped the basic perception of things like color and direction of time, says the primary author and psychologist Alex Carstensen.

In the new study, published Monday in Proceedings of the National Academy of Sciences, scientists asked three-year-olds in China and the United States to figure out which pair of blocks would turn on a music box. In the main experiment, the music box would only play music if two different kinds of blocks were placed on top of it. This simple task was designed to test which of two pairs of blocks a child would pick to turn on the music box. One option, called the object match, had two blocks that were the same shape as each other and the same shape as one of the blocks the child had seen turn on the box before. The second (correct) option, the relational match, had two blocks with different shapes instead of two blocks of the same shape.

The American, English-speaking toddlers usually tried to turn on the music box with the object match blocks. If they that saw a blue block repeatedly turned on the music box, they picked the option with two blue blocks instead of two different blocks. This was somewhat expected because learning lots of nouns is thought to encourage kids to pay more attention to objects themselves instead of the same or different relationship between objects.

The Chinese, Mandarin-speaking kids were able to notice that the specific blocks didn’t matter, as long as the two blocks in the pair were different from each other. They more often chose the relational match. Carstensen believes the Chinese kids might do this because elements of their culture or of the Mandarin Chinese language that direct their thinking towards relationships between things.

The fact that Mandarin-speaking children between the ages of 18 months and four years old could pay attention to relations instead of objects is “groundbreaking,” said Twila Tardif, a developmental psychologist not involved in the study who studies Chinese and American babies’ early vocabulary. She says that both language and culture are jointly influencing babies’ relation match choice, but she looks forward to future studies that further tease apart the role of each of these.

Another developmental psychologist and expert in relational reasoning, Dedre Gentner, thinks the researchers used “a clever task.” However, she says her own work and the work of others has already suggested that there is no universal pattern of developing relational reasoning as a child ages.

“It’s old wine in new bottles,” says Gentner, adding that this study is more evidence that being exposed to relational language is generally good for babies’ improved reasoning.

Editor’s Note: Sarah White, a graduate student at Northwestern University and AAAS Mass Media Fellow, has previously worked with Dedre Gentner but is not currently doing any related research.

A previous version of this story misspelled the name of University of Michigan psychologist Twila Tardif. The piece has also been updated to more accurately reflect Carstensen’s views on how Chinese children develop relational thinking.