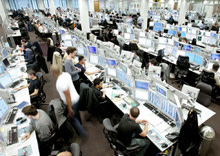 Men who want to know if they'd make it as day traders on Wall Street just have to look down at the fingers, according to a new study. The longer their ring fingers are in relation to their pointer fingers, the more likely they are to have what it takes to make millions on the trading floor.

Previous research has found that the digit ratio reflects how much testosterone an unborn baby was exposed to in the womb. Those exposed to high levels of the hormone are more sensitive as adults to testosterone that creates feelings of confidence and encourages risk-taking, said study author John Coates [Bloomberg].

Coates has previously shown that traders who register the highest levels of testosterone in the morning make the most money through the course of the day, and this new study adds to the earlier work by suggesting that their advantage may have been innate, not learned.

Although it may come as no surprise that testosterone could be a big player in the mano-a-mano world of Wall Street, the research offers the best evidence yet of the hormone's role in determining which would-be Masters of the Universe will thrive. It also supports the growing recognition that biology plays a role in complex human behaviors, and that financial choices in particular are often less rational than economists appreciated [Washington Post].

Coates had heard of research indicating that men with longer ring fingers had more aptitude for sports.

So "for a lark," Coates says, he decided to take handprints of 44 of the young male traders he studied, all of whom worked on a fast-paced London trading floor. Coates's hunch paid off. In the new study ... his team found that traders with the lowest index-to-ring-finger ratios (i.e., those exposed to more testosterone before birth) made the most money over a 20-month period, even when the researchers controlled for years of experience. They averaged the equivalent of $1,232,590, nearly six times more than that of men with high ratios. "I almost fell off my chair," says Coates [ScienceNOW Daily News].

The findings, reported in the Proceedings of the National Academy of Sciences [subscription required], shouldn't cause Wall Street recruiters to scrutinize the hands of applicants, Coates says.

“Population statistics such as ours give average effects over a population but can be tricky when applied to individuals,” he said. The next stage in the Cambridge research will be to look at other types of financial trading. “When it comes to long-run investments, we may well find that successful individuals have higher, more feminine digit ratios,” he said [Financial Times].

Related Content: 80beats: Men With High Testosterone Levels Make Riskier Financial Decisions DISCOVER: Testosterone Rules has more on what the hormone does to the human male