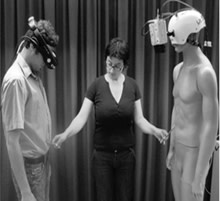 Researchers have discovered that it's simple to trigger the illusion of body swapping: All it takes are some goggles, live-streaming video, and a bit of a belly rub.

Spooky as it sounds, neuroscientists ... were able to use simple camera trickery to fool volunteers into perceiving the bodies of both mannequins and other people as their own [New Scientist].

In an article published in the journal PLoS ONE researchers describe an experiment in which the volunteer put on a pair of high-tech goggles and was told to look down.

At the same time, video was beamed into the glasses' displays from a camera attached to the head of a mannequin. In short, the study participant was looking in the direction of his or her own stomach, but actually seeing the stomach of the mannequin. At that moment, the person conducting the experiment would rub both the stomach of the mannequin and of the research subject. Subjects reported that they felt as if they were feeling the touch on the mannequin [Wired News].

What's more, when the mannequin's belly was threatened with a knife, electrodes on the test subject's skin showed a physiological stress response. This odd laboratory phenomenon could have real-world applications, says study coauthor Henrik Ehrsson; most obviously, it could be used to develop

more advanced versions of computer games such as Second Life, he said. "It could lead to the next generation of virtual reality applications in games, where people have the full-blown experience of being the avatar," Ehrsson said [AP].

The technique could also be used in psychotherapy, he suggests, to let people inhabit other roles or gain some distance from their own body. The trick works, Ehrsson says, because the brain

has spent a lifetime in its own body. It builds models of the world instantaneously, based on lived experience and using split-second assumptions — namely, that the eyes are attached to the skull [The New York Times].

Now technology has trumped those assumptions, leading to what researchers say is a very strange sensation. In another experiment, researchers successfully pulled off a reciprocal body swap when two volunteers shook hands for several minutes while seeing a video feed from a camera mounted on the other person's head. While that trick worked, the

illusion only goes so far. The researchers said they could not fool their volunteers into thinking they were a box, for example [Reuters].