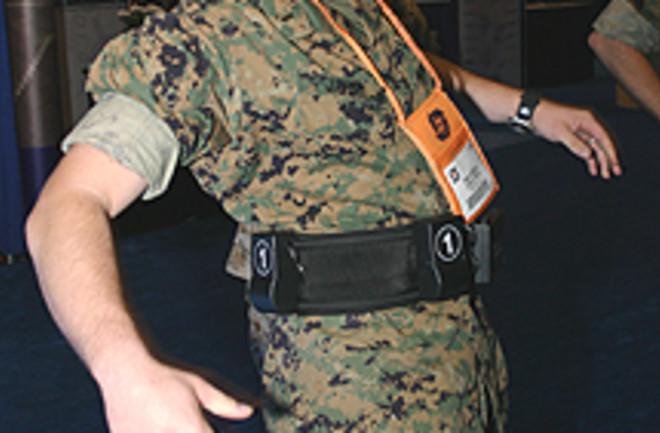 A Texas-based company called VirTra says the way to prepare people for combat is to train them to handle pain—lots of pain. Enter VirTra's Threat-Fire belt, a converted stun gun that exacts a penalty of 80,000 volts.

Military and police trainees strap the five-pound battery-powered device around their midsections, step into a room lined with video screens, and plunge into realistic combat scenarios. When a trainee gets "shot" or otherwise injured, Threat-Fire zaps him.

At the lowest setting, the shock feels like a rubber band snapped hard against the skin, says VirTra president Bob Ferris. The highest setting knocks trainees to the floor and incapacitates them; VirTra says they recover, no lasting harm done, within a few minutes. "If you've ever seen Star Wars, when the emperor shoots lightning bolts at Luke Skywalker—that's what it's like," says Ferris.

Ferris claims the realism of VirTra helps prepare trainees to cope with sometimes lethal stress responses like "tunnel vision," a natural tendency to ignore potential threats in the periphery. The Army agrees. "We want the trainee to be able to concentrate and function and fight through that pain and try to see a scenario out to a conclusion," says Doug West, a firearms instructor at Fort Hood, Texas, which has purchased six belts so far.

"There are literally 100 years of learning theory saying that in training, you should replicate as many cues of the real world as possible," says Albert Rizzo, a University of Southern California psychologist who studies combat-related post-traumatic stress disorder in Iraq War veterans. "It's hard to talk about this without sounding like a sadist. But when you weigh the benefits you might get from better training, it's not a cruel thing—it's a smart and ethical thing."