With phantom limb syndrome, people feel a limb that is missing from their body. An inverse disorder causes people to reject healthy parts of their body. 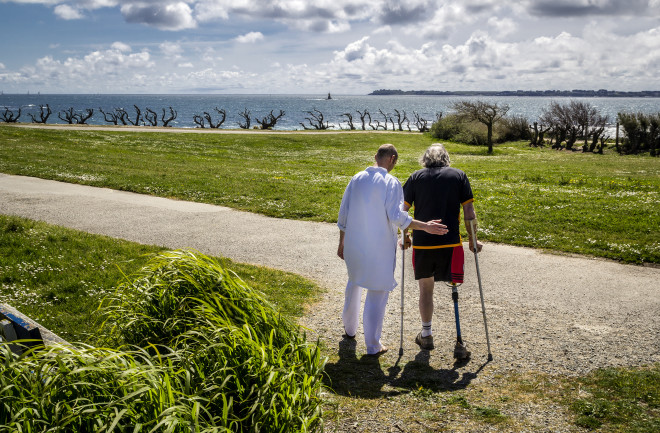 Picture being haunted by a phantom. Tormented by something you can’t see. Every so often you feel an itch, a twitch, a warm sensation or a gesture. Sometimes you’re haunted by debilitating pain in this familiar part of your body that is gone. Now imagine a different kind of torment from something actually attached to your body. It haunts your waking hours because you perceive it as foreign. It’s always there, wherever you go, torturing you with its presence.

Rather than a horror film premise, these are actual medical conditions described centuries ago, and continuing today. Researchers are still unraveling what is actually happening in the body and mind.

The first condition, known as phantom limb syndrome, is common in amputees. Most experience some sensation in their missing limb. Some suffer from debilitating phantom limb pain. The second condition, known as body integrity identity disorder (BIID), is rare. It manifests as a pervasive wish to amputate a healthy limb because it feels intrusive. Our sense of body ownership depends on appropriate connections, structure and function of specific brain regions. Phantom limb pain and BIID involve brain abnormalities and changes in perception of body ownership.

Sixteenth century surgeon Ambrose Paré first described phantom limb pain. In The Works of Ambrose Parey, he wrote that amputees “imagine they have their members yet entire” and “complain of pain.” The remedy? An ointment made of flowers, herbs, trees and shrubs. In 1871 neurologist Silas Weir Mitchell published Phantom Limbs, assigning a name to this yet unnamed phenomenon. The following year, he gave the first well-defined clinical explanation of phantom limbs in Injuries of Nerves and Their Consequences.

In the eighteenth century, surgeon Pierre Süe first described BIID rather dramatically in Literary and Critical Historical Anecdotes on Medicine, Surgery, and Pharmacy. He tells of a man who held a surgeon at gunpoint, forcing him to amputate his healthy leg. The amputee later sent payment and a thank-you letter, which read “You have made me the happiest of all men by taking away from me a limb which put an invincible obstacle to my happiness.”

In 1977, psychologist Gregg Furth and colleagues published a study in The Journal of Sex Research describing the desire to amputate as a paraphilia — a deviant sexual desire. Because of this view and the ethical controversy of amputating a healthy limb, an underground movement formed. A covert international market for surgical amputation still exists, even as science helps BIID emerge from the shadows. Science journalist Anil Ananthaswamy describes this market in his book The Man Who Wasn’t There: Tales From the Edge of the Self.

Body Image and the Brain

Neuroscientists Paul McGeoch, David Brang and Vilayanur Ramachandran at the University of California, San Diego were the first to present BIID as a neurological disorder in a 2008 NeuroReport study. In 2011, they published another study showing that the intense feeling of limb rejection is reflected in the brains of BIID sufferers. Touching the unwanted limb failed to generate normal activity in a brain region crucial to the perception of body ownership — the right parietal lobe. The authors write that people with BIID “can feel the limb being touched without it actually incorporating into their body image.”

More recently, neuropsychologist Peter Brugger and colleagues from the University of Zurich published a study in Brain and Behavior examining the brains of BIID sufferers. They found abnormal neural connections in brain regions that contribute to body-image formation. The authors suggest that unusual brain activity may cause “over-attention to specific body parts and the feeling of over-completeness.” Brugger and colleagues’ 2020 study in Current Biology further confirms abnormal brain structure, function and connectivity in BIID sufferers.

BIID brains likely develop differently than other brains, according to McGeoch. He says it’s the mismatch “between brain map and physical reality” that leads to the desire to amputate a limb. Some BIID sufferers who undergo amputation may develop phantom limb syndrome. But their phantom sensation may differ from somebody who had no prior desire for an amputation and lost a limb. McGeoch explains that some phantoms may be caused by the brain’s response to the sense of touch; others may arise from higher level brain areas — such as the right parietal lobe. BIID sufferers “don’t have a representation [of the limb] in the parietal lobe and it may be that their phantom is arising from the touch area of the brain.”

McGeoch describes phantom limb pain and BIID as almost the converse of each other. “With phantom limb,” he says, “the brain maps are all intact but you have lack of input [to the brain] because of the amputation.” The way we perceive our body parts depends on the ongoing assimilation of many senses, such as sight. “Vision plays a dominant role in creating body image,” McGeoch says. It also modulates pain, according to Ramachandran.

Much of the groundbreaking work on phantom limbs was done in the 1990s by Ramachandran and colleagues. In a famous 1996 experiment published in the Proceedings of the Royal Society of London, a mirror was used to relieve the phantom limb pain of amputees. Neuroscientist Jack Tsao and colleagues from the Walter Reed National Military Medical Center confirmed that mirror therapy eases phantom limb pain in a 2017 clinical trial.

The mirror image of the intact limb creates a visual illusion of the phantom limb. This gives the brain an alternate source of information in the absence of touch signals. “People don’t realize the profound influence of other sensations, like vision, on pain,” Ramachandran says. The brain is essentially tricked into restoring coherent neural connections, which alleviates pain. In this way, mirror therapy acts as a simple virtual reality tool.

Unfortunately, there is still no treatment for BIID. Many BIID sufferers resort to self-amputation out of desperation, with support from online forums that provide how-to advice. Surgeons who secretly agree to amputate a healthy limb argue that they are preventing self-harm and possible death. As we learn more about the neurological basis of the disorder, new treatment options may emerge.

Our understanding of phantom limbs and BIID has come a long way thanks to neuroscience. Studies of these conditions teach us about our sense of body ownership — something most of us take for granted. They also show how dynamic and malleable brain connections are, along with our sense of body identity. Ramachandran describes the ability to harness our senses, specifically vision, to fix faulty brain wiring as “a new model of reality, a new model of the body.” With this in mind, gratitude must also be given to patients. Their experiences are like a mirror, reflecting for us what we do not yet fully understand.