This Is Your Brain on Magic Mushrooms 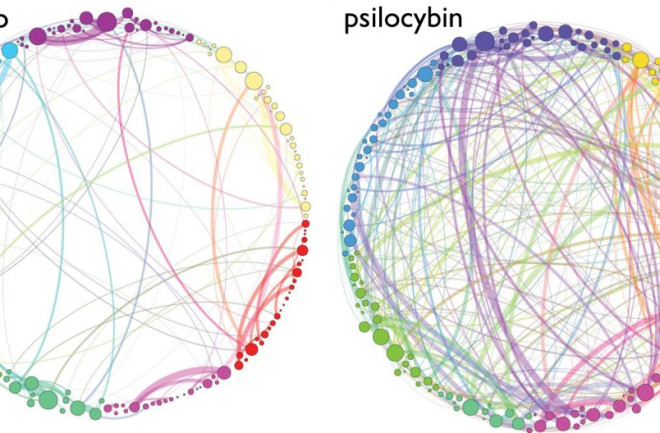 Left, the stable brain activity in a normal brain. Right, under the influence of psilocybin, diverse brain regions not normally in communication become strongly linked.

Psychedelic substances can change a user’s mindset in profound ways — a fact that’s relevant even to those who’ve never touched the stuff, because such altered states of consciousness give scientists a window into how our brains give rise to our normal mental states. But neuroscientists are only beginning to understand how and why those mental changes occur.

Now some mathematicians have jumped into the fray, using a new mathematical technique to analyze the brains of people on magic mushrooms.

Scientists have known for decades that many of psychedelic drugs’ most famous effects — visual hallucinations, heightened sensory and emotional sensitivity, etc. — are linked to elevated levels of the neurotransmitter serotonin.

But increasingly neuroscience researchers are interested not just in single chemicals but also in overall brain activity, because the most complicated brain functions arise from lots of different regions working together. Over the last several years, a branch of mathematics known as network theory has been applied to study this phenomenon.

Paul Expert, a complexity researcher at the Imperial College London, and his team took this approach to analyzing fMRI data from people who’d taken psilocybin, the psychedelic chemical in magic mushrooms. The team had recently been working on a new technique for network modeling — one designed to highlight small but unusual patterns in network connectivity.

The team used fMRI data from a previous study, in which 15 healthy people rested inside an fMRI scanner for 12 minutes on two separate occasions. The volunteers received a placebo in one of those sessions, and a mild dose of psilocybin during the other, but they weren’t told which was which.

The investigators crunched the data, specifically studying the brain’s functional connectivity — the amount of active communication among different brain areas.

They found two main effects of the psilocybin. First, most brain connections were fleeting. New connectivity patterns tended to disperse more quickly under the influence of psilocybin than under placebo. But, intriguingly, the second effect was in the opposite direction: a few select connectivity patterns were surprisingly stable, and very different from the normal brain’s stable connections.

This indicates “that the brain does not simply become a random system after psilocybin injection, but instead retains some organizational features, albeit different from the normal state,” the authors write in their paper in the Journal of the Royal Society Interface.

The findings seem to explain some of the psychological experiences of a psilocybin trip. Linear thinking and planning become extremely difficult, but nonlinear “out of the box” thinking explodes in all directions. By the same token, it can become difficult to tell fantasy apart from reality during a psilocybin trip; but focusing on a certain thought or image — real or imagined — often greatly amplifies that thought’s intensity and vividness.

The authors suggest that effects like these may be rooted in the two connectivity traits they spotted, since the connectivity patterns that rapidly disperse may reflect unorganized thinking, while the stable inter-regional connections may reflect information from one sensory domain “bleeding” into other areas of sensory experience. In fact, the researchers also suggest that synesthesia — the sensory blurring that causes users of psychedelics to experience sounds as colors, for example — may be a result of these connectivity changes too.

The researchers hope that the patterns they’ve found will provide neuroscientists with new approaches for studying the brain on psychedelic drugs, and therefore better understand the strange psychological effects their users report.