Decades of research have offered fascinating insights into human and animal nature, but they are also rife with contradictions. 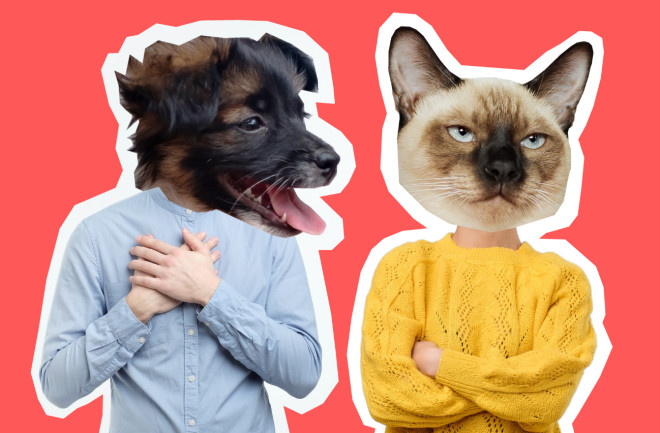 “Dogs have owners, cats have staff.” It’s one of countless aphorisms describing the perceived differences between two of the world’s most popular pets — and the people who love them.

The oppositional nature of this relationship has enormous cultural resonance. It’s the premise for comic strips and films. It makes its way into dating profiles. And it’s the subject of both joking and earnest disparagement, largely directed at the feline contingent: While it’s not uncommon to hear that people who dislike dogs aren’t to be trusted, women who own multiple cats are “crazy cat ladies.”

More than a third of American households own dogs and about a quarter own cats, according to the American Veterinary Medical Association, suggesting that dogs have the edge in terms of real-world popularity. (Paradoxically, cats are the algorithmic darlings of the day.) Most other surveys find that dogs are the preferred pet too, though it’s worth noting that percentages vary widely. The American Society for the Prevention of Cruelty to Animals, for example, suggests that while more households own dogs than cats, there are about eight million more pet cats in the U.S. And, of course, many households include both species.

A wide variety of studies, employing an array of different methodologies, have attempted to elucidate the reasons that people prefer one species over the other. Some support commonly held stereotypes — dog owners are extroverts and cat owners are introverts, for example — and others call them into question.

Samuel Gosling, a psychology professor at the University of Texas at Austin and lead author of a 2010 paper on the subject, observes that most research hasn’t used well-established means of gathering psychological data. Samples are also often very selective, taken from vet office visits or explicitly solicited from pet enthusiasts. Still, his research offers some tantalizing insights into the truth about these two supposedly antithetical types.

Gosling’s study employed the Big Five personality model, which isolates five major personality dimensions: agreeableness, conscientiousness, extraversion, neuroticism and openness. It was also among few studies that offered respondents an option to choose both dogs and cats or neither. The results found some validity to our instinctive perceptions about the types of people drawn to each species.

“People probably expect to find that dog people are more extroverted,” Gosling says. “We certainly supported that preconception.” They were also more agreeable and conscientious while cat people were more neurotic and open. Those who liked both or neither scored similarly to dog people.

Another study, published in 2015, found that dog owners scored higher on dominance-related traits than cat owners — suggesting that canine obedience was complementary to their personalities. Cat owners, conversely, were less dominant and apparently less bothered by the independent nature of their chosen companions. However, a previous study found no variance in dominance between the two groups.

A more recent investigation, published in the Human-Animal Interaction Bulletin in 2017, used the broader Sixteen Personality Factor (16PF) questionnaire. It suggested that dog people were warmer and livelier, more conscious of rules, and more socially bold. Cat people, on the other hand, were abstract thinkers, more intelligent and more self-reliant.

The variation in these characteristics between the sexes has been the focus of plenty of research as well. An early investigation into the matter from 1980 indicated that male cat-lovers were more autonomous and male dog-lovers ranked higher in dominance and aggression; female cat-lovers were lower in dominance while females from both groups were lower in aggression.

There is some evidence that these perceptions have consequences in the dating world. One examination discovered that women viewing dating profiles featuring men holding cats rated them as less masculine and thus less dateable than those who weren’t. Research on how masculinity and dominance affect female attraction to males has been inconsistent, but it does appear that both may be factors in at least some populations.

Read More: Dogs Have Co-Evolved With Humans Like No Other Species

There could, of course, be other factors at play. According to the results of the 16PF study, the personality characteristics of cat owners align with those of creative people — often perceived as less conventional. They are also, per Gosling’s investigation, more open. Gosling speculates that this may relate to the fact that dogs are slightly more conventional than cats. They have certainly been associated with humans for a longer period — at least 14,000 years by some estimates. By extension, this might make those who prefer dogs over cats appealing to a broader swath of potential partners.

Canine and feline preferences have also been linked to a variety of health outcomes — mental, physical and even social. Dog ownership in particular appears to have a strong correlation to improved physical and mental health, in part due to the need for regular dog walks.

In addition to serving as a source of exercise, dog walking also facilitates social interaction. People with dogs are seen as more approachable and have consistently been shown to have more frequent and longer interactions with strangers. An analysis of around 160,000 Facebook users from the U.S. found that cat people, on the other hand, were slightly more likely to be single and have fewer friends (sorry, cat-lovers).

Health effects seem to be particularly acute in aging populations. A Norwegian investigation of men and women over 65 found that female cat owners consistently reported poorer health than any other group. Similarly, German women over 40 who owned cats were found to have lower self-esteem while German men in the same age cohort who owned dogs were found to have higher self-esteem.

A survey of Japanese seniors determined that dog ownership was positively correlated to increased motor activity and social function. The effect has a long tail — elderly Japanese men who owned dogs early in life were also found to have greater social support in their old age. Unexpectedly, cat ownership appeared to improve social function in that population as well.

Dog and cat people seem to have different attachment styles as well, which are the formation of emotional bonds. This is hardly unexpected given the finding that dogs and cats themselves display different types of attachment to their people.

These tendencies are more or less reciprocal. Dog owners display higher levels of attachment to their animals than cat owners, according to some research. They are also more likely to attribute theory of mind — the understanding of mental states — to their pets and to overestimate their cognitive abilities. Humans are also better able to read canine facial expressions than feline ones. Some studies indicate that dogs are more likely to be considered family members, though others find no difference.

Ultimately, while the literature on cat people and dog people offers some fascinating insights into human and animal nature, it should probably be taken with a grain of salt. The findings are rife with contradictions and often ignore mitigating factors. And for the most part, they pay little attention to the fact that many of us like both species equally — or don’t care for animals at all.