For many of us, the urge to reach for food when we're stressed can be almost impossible to resist. But neuroscience suggests it goes much deeper than a lack of willpower. 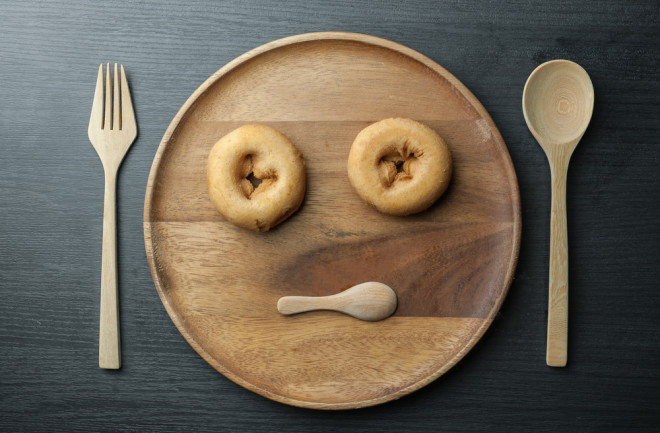 For some people, no matter how much they try to eat healthy, when intense emotions surface, overcoming food cravings seems impossible. We reach for the comfort foods that we hope will make us feel better in the short term, but afterwards often end up feeling down in the dumps. That feeling of shame can be overwhelming — particularly in a diet-driven society where maintaining a healthy relationship with food is difficult, especially if it’s used as a coping mechanism. But why do some people turn to food when they’re stressed while others don't? Are our brains wired differently, or does it just come down to a simple lack of willpower?

Nicole Avena, a neuroscientist at the Mount Sinai School of Medicine in New York, says when we’re truly stressed, the biological response should be to not eat; when our body releases cortisol, it sends a signal to our brains that we're not hungry. But in our modern times, we’re often reared from a young age to use food to make ourselves feel better. We eat not because we’re hungry, but because we’re signaling the reward systems of the brain. In other words, we're binging or overeating because it releases neurochemicals that make us (temporarily) feel better.

Are the Brains of Emotional Eaters Different?

Emotional eaters, says Avena, have a heightened response in their dopaminergic system, the group of nerves originating in the mid-brain which are responsible for the brain’s reward system, she says. Research published in 2020 in Frontiers in Behavioral Science suggests that when emotional eaters are primed with negative emotions and then eat, they think the food actually tastes better, indicating that their reward system is prone to react positively to food when they’re stressed. “Food becomes a tool for self medication that releases dopamine in the brain, similar to what happens when someone uses a drug of abuse.” says Avena.

But after that initial period of euphoria, people feel guilty because they regret binging, she says. It becomes a vicious cycle of binging, regret and then diet restriction that’s detrimental to both our mental and physical health. Food is a popular mechanism for coping because it’s so easily accessible, and because it’s mostly socially acceptable. While getting high or taking shots at the holiday party may result in judgement from your coworkers, reaching for a cupcake or housing the chips and dip is more socially defensible, says Avena.

Is Emotional Eating Genetic or Environmental?

Emotional eating is both environmental and genetic. For some of us, our environment can be highly detrimental because over-processed foods with high amounts of added sugar are so pervasive that they’re almost impossible to avoid.  “Some of us have more of a propensity for emotional eating, but it’s also triggered by our environment,” says Avena.

While there are some genetics involved, Avena says emotional eating leans much more toward environmental factors. The availability of unhealthy foods, coupled with all the stressors of everyday life, can trigger the cycle of overeating and regret. And the holidays can make the situation worse, especially right now: Some people who might not have had social anxiety about getting together with family are uncomfortable, both because of the risk of getting sick and because social anxiety has been exacerbated as a result of the pandemic. This “subclinical level of anxiety,” says Avena, is a constant presence, and people are medicating themselves with food to deal with it. Avena's research, published in Frontiers in Psychiatry, found that 53 percent of U.S. adults reported that the coronavirus outbreak has negatively impacted their mental health, “exacerbating [the] use of alcohol, drugs, gambling and overeating as coping mechanisms.”

Joanna Steinglass, associate director of the Eating Disorders Research Clinic at the New York State Psychiatric Institute, says there’s a lot we don’t know about the mechanisms behind emotional eating. We know about all of the hormones that are involved in eating and stopping eating, says Steinglass, but understand far less about its social and emotional components. We understand what feeding looks like in animal models and why they do it, but we’re far from understanding humans.

Food is a natural reward because we need it to live. But presumably, says Steinglass, there’s also more complex behaviors serving the reward systems of the brain. Food can provide a very personal reward just by its psychological associations. And when this rewarding behavior is reinforced time and time again, it becomes habit and moves to another part of the brain. Research has shown that the basal ganglia, located in the brain’s cerebrum, is associated with habit formation. “When behaviors get repeated enough and become overtrained, they’re automated and aren’t as connected with the initial reward,” says Steinglass.

In other words, the behavior becomes more connected to its trigger than to the outcome. For example, if every time you’re stressed at work you go out and grab an overstuffed burrito, even when you don’t really need it, you’re still likely to eat it because it’s what your brain has been trained to do as a coping mechanism. Emotional eaters may be more prone to train their brains to cope in these unhealthy manners. Basically, says Steinglass, we think less about the outcome and more about the stressful circumstance that sets it off.

Emotional eating is still largely mysterious — we don’t know why some of us eat to cope and others don’t. But we’re finding that there’s way more to it than willpower. It can be about deep-seated emotional coping mechanisms and our brain’s unique reward system. Or even whether, as children, we were unknowingly groomed to eat comfort foods when we were sad. So the next time you beat yourself up over that extra piece of cake or that side of French fries, give yourself a break; the reasons behind it may go far deeper than just your ability to say "no."