The Moon and Your Mood

For decades, we’ve heard that Earth’s only satellite doesn't really impact human behavior. But new research says that it may. 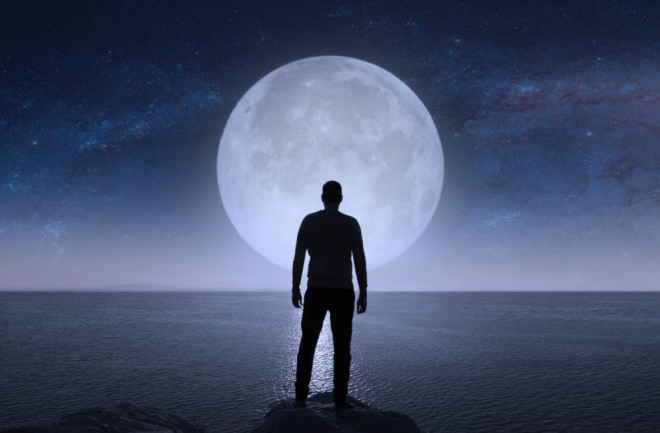 The notion that the moon has a powerful effect on the human mind is deeply ingrained in culture and lore. It’s even embedded in language; consider the word “lunacy,” which comes from the Latin word lunaticus, meaning something like “moonstruck.” But if you’re convinced the phase of the moon affects your moods or the moods of people around you, science has long had a clear message for you: You’re wrong. That’s a myth. Many studies have been done over the past decades looking for an association, and there has been virtually no evidence of any effect of the moon on human behavior.

But maybe science has been looking in the wrong places. According to some new studies, past research on the moon’s cycles missed a rather astonishing pattern.

David Avery, a psychiatrist at the University of Washington School of Medicine, specializes in treating mood disorders and has done extensive research into circadian rhythms and phototherapy. In 2004, a patient came to him with rapid-cycling bipolar disorder. This man was an engineer, someone Avery describes as “very methodical and organized.” In an effort to figure out what was causing his mood swings, the engineer had kept meticulous records of his sleep-wake cycles, which he shared with Avery. The patient would swing from about two weeks of barely sleeping to about two weeks of excessive slumber. During the low sleep periods, he would be manic. During the heavy sleep phases, he would be depressed.

The connection between sleep and bipolar disorder isn’t new. Alexandra Gold, a clinical fellow at Harvard Medical School whose research includes the role of sleep in bipolar disorder, points out that “decades of research have shown that regular schedules and light are among the components to maintaining mood stability.” Much of that research had been done by Avery.

But this was different. This patient’s sleep patterns didn’t correspond with the light and dark cycles of the moon. And he slept in a room that was completely dark no matter what the length of the day or the phase of the moon. But his sleep patterns did perfectly match the tidal cycles. When Avery put the data into an Excel spreadsheet, the pattern “just popped out,” he says.

Though Avery spotted this pattern immediately, he did not publish his results. Remarkable as the pattern was, he could find no mechanism for it. And it was just one patient. The data languished in a file drawer for over a decade.

In the 1970s,Thomas Wehr, now a scientist emeritus at the National Institute of Mental Health and one of the pioneers of research into sleep and circadian rhythms in humans, looked at the sleep patterns of 17 patients with bipolar disorder and noted odd patterns that seemed to match lunar cycles. However, his patients followed a much more complex lunar cycle than Avery’s patient. And they had not kept the detailed sleep logs the engineer had. Wehr had been puzzling over the data ever since. Avery’s patient was the key. “I think it's serendipity,” says Avery, pointing out that the excellent record-keeping of his patient made it possible to see the pattern.

The two researchers teamed up to analyze the data, and in 2018, Avery and Wehr published a paper detailing their joint discovery: The moon really does influence moods. Decades of studies had missed the effect because they focused on only one type of lunar cycle and looked at groups of subjects whose varied responses cancelled each other out. “Given the variability of human responses to lunar cycles, aggregate analyses used in almost all previous studies would likely have cancelled out individuals’ responses and led to false negative results,” Wehr wrote in a paper published this spring discussing this research. “I think it's important to study individuals longitudinally,” adds Avery. “When one looks at large numbers of subjects, there's a lot of noise, and significant findings get lost.”

The pattern is definitely there when you know how to spot it. But as Avery noted way back in 2004, the mechanism is still a mystery. One possibility, he says, is that the vestibular system, which is important for balance and can detect gravity, could be affecting sleep and circadian rhythms. But there are other possibilities. “The moon could be changing the magnetic field, causing changes in the cryptochromes in the hypothalamus, and changing the body clock in that way,” he says. “But right now, it appears as though gravity is the main suspect.”

Other things besides sleep-wake cycles, such as menstrual cycles, are likely affected by more than one type of lunar cycle as well, as Wehr points out in the 2021 paper. But there is still a lot of work to do. “This is an exciting new area of research,” says Gold. “And there remains much more to be known about lunar cycles and mood.”

Meanwhile, if your sleep patterns or moods seem to follow a mysterious pattern, don’t assume it has nothing to do with the moon.

More From Discover
Mind
Nostalgia and Thinking About the Future Can Be Good For You
Health
Could COVID-19 Be Changing Who We Are?
Mind
What is Anxiety and How Can Worries Overpower Us?
Mind
How Your Brain’s “Fingerprints” Could Diagnose Disease
Mind
What Is Dissociative Identity Disorder?
Health
What You Can Do About Seasonal Depression
Recommendations From Our Store
My Science ShopDiscover STEM Kits
My Science ShopDiscover 2022 Calendar
My Science ShopStrange Science
My Science ShopElements Flashcards
Shop Now
Stay Curious
Join
Our List