The Brain Science Behind the "Twisties”

Elite athletes train their brains and bodies to be in perfect sync, but sometimes mixed signals can spell disaster. 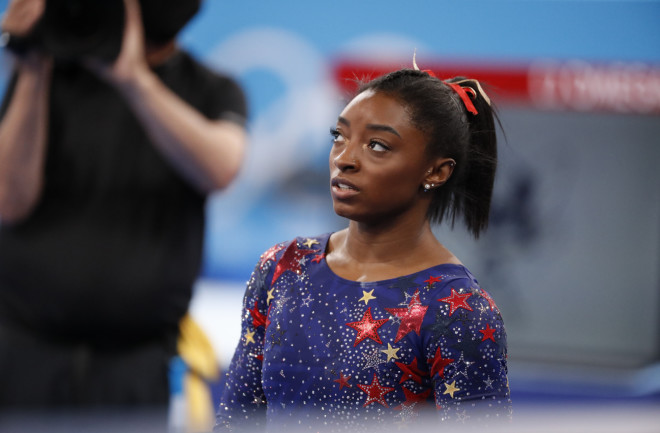 After Simone Biles, widely considered one of the greatest gymnasts of all time, withdrew from several events at the Olympics, many fans were introduced to a new term: the “twisties.”

The twisties are the result of a gymnast’s brain and body essentially forgetting how to cooperate with each other during twists. During the team vault event on Tuesday, July 27, Biles attempted a move with a two-and-a-half twist but landed after completing a one-and-a-half twist. She later shared in interviews and on Instagram that she lost her bearings in the air.

The disorientation experienced by gymnasts dealing with twisties makes it extremely difficult to land correctly, which can lead to serious injury. “I have no idea how I landed on my feet,” Biles wrote on her Instagram. She added that her decision to step back from the competition was ultimately about her own safety.

But gymnasts aren’t the only ones who encounter this brain-body hijacking and it goes by many different names depending on the sport: “the yips,” “the waggles,” “target panic,” or even “the monster.” Whatever you call it, it can be sticky. Often, athletes who encounter the twisties or yips must go back to basics and carefully relearn the skills that trigger it.

Learning on the Fly

Your brain is constantly taking in information about movement, and that information comes from several sources. Vision plays a big role, of course, but more important are the vestibular system (which regulates balance) and the proprioceptive neurons in muscles (which provide information about body position).

The cerebellum, located at the back of the brain near where your head meets your neck, is responsible for synthesizing that information, comparing it to past experiences and building internal models for the “right” way to do any given action — in real time. The cerebellum is also constantly adjusting for changes in things like muscle fatigue.

“It's a really beautiful computation the brain does,” says Kathleen Cullen, a neuroscientist and biomedical engineer at Johns Hopkins University who studies balance and active movement. The more data you feed the cerebellum, the better it models and adjusts your actions under different conditions. That’s why elite athletes practice movements over and over again. They’re building super-precise internal models for their skills.

When attempting a new skill, such as a complex twist that temporarily goes against the body’s natural balancing reflexes, athletes depend on feedback from coaches and other external cues. But with time and practice, their internal models become keen enough to tune into internal balance and proprioceptive cues. These models becomes much more fluid as the brain and body learn to trust each other and deliver the right signals at the right time.

Even if an athletic maneuver has been practiced extensively, however, it will always require some level of concentration, says Cullen. The cerebellum and body cooperate merely to take care of the fine-tuning without conscious input. That’s what we think of as “muscle memory.”

Hijacked by the Sympathetic Nervous System

Because the brain and body are intimately connected, so too are mental and physical performance. It’s impossible to speak for what exactly triggered Biles’ case of the twisties, says Jamey Houle, a sports psychologist at Ohio State University and former competitive gymnast, but in his experience, “a lot of times when there’s a breakdown between your mind and your body, it’s because your body is kind of hijacked by anxiety.

The culprit in question is the sympathetic nervous system, which is responsible for issuing flight, flight and freeze responses to perceived threats. It’s very helpful if you need to flee from a bear; it’s less useful when attempting to pull off a complicated gymnastic maneuver.

Performing under pressure, Houle says, can trigger a stress loop in which an athlete feels an urgent need to correct errors and becomes more and more panicked for every adjustment that doesn’t work — and therefore more error-prone because the sympathetic nervous system drowns out the cerebellum’s practiced instructions. When the carefully honed trust between brain and body is broken, the athlete loses control of the maneuver.

“I can’t even fathom twisting. I seriously cannot comprehend how to twist,” Biles said on Instagram. When she later won bronze in the individual balance beam final on August 3, she did it with a modified routine that avoided twists.

It Happens to the Best of Us

Olympians may be capable of amazing physical feats, but they aren’t superhuman. We all learn by doing and building internal models to guide us, we all feel anxious sometimes, and we have all been in a scenario where a skill we know well seems to go straight out the window right at the moment we need it most.

Houle counsels college athletes to fight against their sympathetic nervous system with deep breathing, mindfulness and grounding exercises. Here again is the all-important brain-body connection: mindfulness is all about training your mind to be aware of what the body is experiencing in the present while simultaneously directing it to a less stressed state.

USA Gymnastics, the national governing body of gymnastics in the United States, issued a statement on July 28 that Biles would step back from competition to “focus on her mental health.” Biles has been very open about her past traumas and the disconcerting atmosphere of an Olympic Games that banned spectators and even athletes’ parents. Although Biles is familiar with performing under stress, that’s still a lot to contend with psychologically, Houle says. “It makes sense that twisties would come out as an example of the physical manifestation of psychological concern.”

Houle considers Biles’ decision to prioritize her physical and mental health a “game changer” for athletes. Arguably, it may be an example for all of us; even the best can lose their way, and there’s no shame in admitting it and taking a breather until you find it again.