Talk With Your Hands? You're Doing It Right 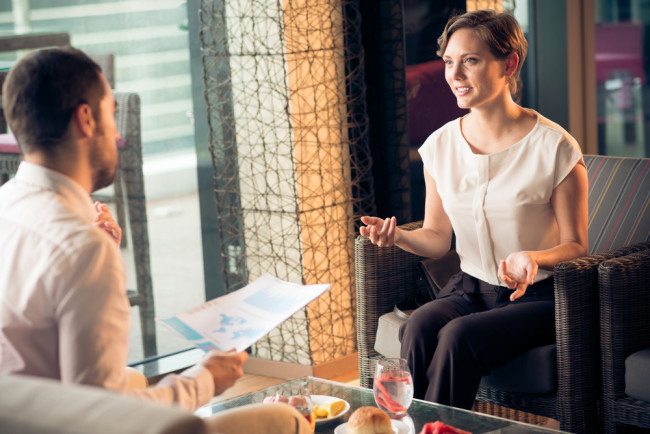 This post was originally published at The American Scholar

. Gestures are simple enough. Right? A spontaneous but well-timed wave can emphasize an idea, brush aside a compliment, or point out a barely obscured bird’s nest to an obtuse friend. We use gestures to help our listeners follow along, and we make ourselves look warm and magnanimous in the process. But on the other hand—and when you’re talking about hands, the puns come furiously—sometimes gestures seem to have nothing to do with edifying or impressing. We gesture on the phone, and in the dark, and when we talk to ourselves. Blind people gesture to other blind people. A growing

of research suggests that we gesture in part for the cognitive benefits that it affords us. Tell us not to use the letter r, or challenge us to adopt a more obscure vocabulary, and our gesture use jumps.

What’s more, there could be a cognitive explanation for why some people gesture more than others. Consider a study forthcoming in Cognition by my former colleagues at the University of Illinois at Urbana-Champaign. The team—Maureen Gillespie (now at the University of New Hampshire), Ariel James, Kara Federmeier, and Duane Watson—recruited 50 undergraduates to complete a number of tests. Some of the tests investigated vocabulary, while others tapped into verbal working memory—the ability to hold, shift, and tweak words in our minds. Then the students watched a sequence of short Tom and Jerry clips, pausing after each to describe the shenanigans that had taken place. The results? Students with poorer verbal working memory (though not a poorer vocabulary) tended to gesture more frequently when recounting the clips. Why might there be a relationship between memory and gesture? An intriguing (if still somewhat fuzzy) theory holds that gestures free up working memory. Speech production requires what psychologists call “thinking for speaking”—that is, putting the message we want to communicate into the appropriate structures, words, and sounds. Gestures may help us organize our thoughts, perhaps by “chunking” or otherwise guiding them into more easily processed units. When speech planning gets hairy, gestures usher in efficiency, sparing us resources to retrieve a word from the deepest reaches of memory, or avoid a grammatical speech error, or simply put things as eloquently as we’d like. The theory offers a nice explanation for why we gesture more when speaking is difficult, and why people with shorter working memory spans might generally gesture more to compensate.

Gesturing and the Brain

But if gesturing is so darn helpful, why haven’t we learned to do it all the time? Who couldn’t use the extra processing capacity on a regular basis? “At this point it’s still unclear,” Gillespie told me. We just don’t seem to. Instead we largely rely on spontaneous gesturing as back-up. “You hit a limit,” said Gillespie, “and if you want to keep going, [the information] has to get pushed off somewhere else.” This is not to say that we couldn’t train ourselves to gesture more and be better off because of it. One study

suggests, for instance, that prodding children to gesture while they explain how to solve math problems helps them learn new problem-solving strategies. But to my knowledge, no similar benefits have been found for adults. I suspect we’ll know more in a few years. We may also come to a consensus on the extent to which gestures influence our thoughts: Does the influence stop at improving thought for speech? Other studies have detected relationships between gesturing and remembering spatialor visualinformation—even our ability to empathize

! Further research might also reveal how these cognitive benefits are shaped by other influences on our gestures: from our emotions, to where we live, to with whom we speak.