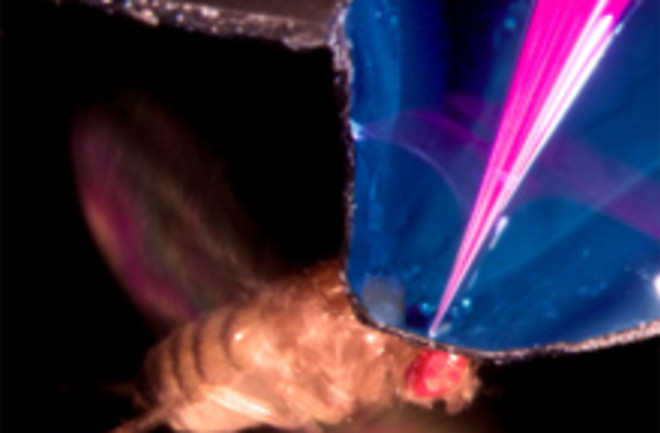 Thanks to a little technological ingenuity, we may soon get a look at what exactly is happening in the flying brain. In the journal Nature Neuroscience, Caltech researchers document how they managed to monitor the brain activity of fruit fly in flight.

"The challenge was to be able to gain access to the brain in a way that didn't compromise the animal's ability to fly, or to perform behavior," said study researcher Michael Dickinson of Caltech. "We couldn't just rip the brain out of the body and put it into a dish" [LiveScience]

. Researchers have previously studied activity in the tiny brain of a living fruit fly, but only when it was restrained. Dickinson's team created a way to look inside while the bug was flying around. First they tethered a fly, clamping its head in place but leaving its wings free, and then they cut away a part of the brain's covering so they could attach electrodes to neurons. Finally they induced the fly to flap its wings with a startling puff of air, and tracked it with digital cameras while the electrodes collected data.

Dickinson said the work, conducted with postdoctoral scholars Gaby Maimon and Andrew Straw, suggests at least part of the brain of the fruit fly (Drosophila melanogaster) is in a different and more sensitive state during flight than when the fly is quiescent [UPI]

. And, he says, they saw double the normal activity in the visual neurons. Having achieved this basic step, the team hopes to further figure out how the extra activity helps the flies see and steer while aloft. Related Content: 80beats: Scientists Glean Secrets of Flight From Birds, Bats, and Bugs 80beats: Alcoholic Fruit Flies Don't Know When To Say When 80beats: Model Suggests 4-Winged Dino Glided Like a Flying Squirrel 80beats: Researchers Flip Brain Cells On And Off With Light PulsesImage: Caltech