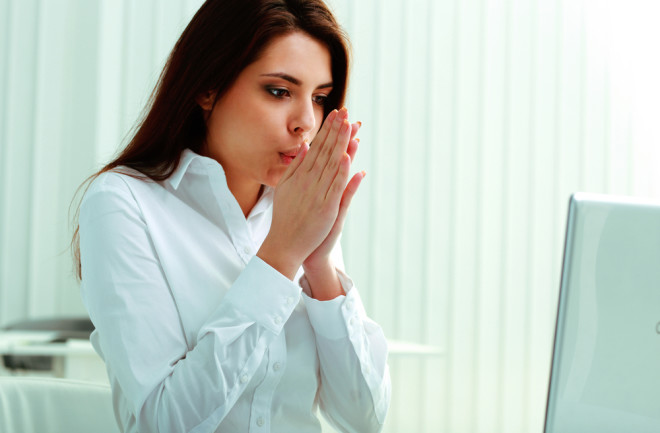 “The women’s winter is here. The freeze is upon us,” warns a Game of Thrones parody about men and women’s office temperature preferences.

If you have a Y chromosome, you probably haven’t experienced “women’s winter.” As the video explains, women’s winter is “when spring turns to summer and there’s blossom on the trees, the office air doth turns to ice and all the women freeze.”

Although the skit is now a few years old, it perfectly captures women’s daily struggle with overly air-conditioned workplaces. To some people, thermostat complaints might seem trivial. But a new study has found that cold offices do more than make women shiver. Thermostat settings geared for men’s comfort — typically cooler temperatures — may actually disadvantage women by lowering their ability to perform some tasks.

The study, published in PLOS One, found that women are better at math and word tests when room temperatures are warmer. The women in the study answered more questions correctly and submitted more answers overall during the timed tests. Men, on the other hand, performed marginally better on the same tests at cooler room temperatures, the researchers found. Temperature didn’t influence performance on the logic test for either gender.

Study author Agne Kajackaite, a behavioral economics researcher at the WZB Berlin Social Science Center, said the research illustrates that “the battle for the thermostat is not just a complaint about comfort levels.” When it comes to women succeeding in the classroom or in the workplace,  room temperatures may make a big difference.

Previous studies have found that women, on average, tend to prefer rooms at 77 degrees Fahrenheit, while men feel comfortable at 71 degrees. And women generally feel colder than men do at the same temperature, thanks to their physiology. But until now, it wasn’t understood if physical discomfort was the only consequence of losing the thermostat wars. Kajackaite and her colleague observed how more than 500 German men and women performed on tests taken at different temperatures. Room temperatures ranged from 61-degrees Fahrenheit (16-degrees Celsius) to 90-degrees Fahrenheit (32-degrees Celsius). Participants received cash rewards based on the number of questions they answered correctly.

Researchers say that women’s math abilities were impacted the most by a chill in the air. But researchers say turning up the heat improved their test performance. For every one-degree Celsius (1.8 degrees Fahrenheit) increase in temperature, women had a 1.76 percent increase in the number of math questions they answered correctly.

Room temperature also influenced how well women did on the word test. On this test — which involved creating words from scrambled letters — women’s performance increased by 1 percent with every one-degree Celsius increase in temperature. Just as researchers observed on the math test, women’s word scores were highest when room temperatures were warmer, and presumably, more comfortable for them.

Men, however, are more comfortable at cooler room temperatures. But their test performance didn’t seem to be as influenced by their thermostat preferences. For every one-degree Celsius increase in temperature, men submitted 0.6 percent fewer correct answers on the math and word tests — a difference, the researchers say, that isn’t that significant.

“The positive effect of increased temperatures on women’s performance is much stronger than the negative effect on men,” Kajackaite said in an email.

Their work couldn’t say, though, if there was an optimal room temperature for men and women.

The study comes on the heels of media coverage of so-called sexist room temperatures. Last year, actress and politician Cynthia Nixon’s unanswered request to debate New York Gov. Andrew Cuomo in an auditorium set to 76-degrees Fahrenheit reignited the gender-fueled debate over office temperatures. According to CBS News her campaign remarked, “Why is it that time [and time] again, women have to be the ones who are freezing cold at work?”

Well, it turns out that the temperature standards used in offices around the world were pretty much devised for men. The model to determine the ideal workplace temperature was developed in the 1960s based on the average worker of the era — a 40-year-old, 154-pound man dressed in a business suit.  This model was established before women made up half the workforce, and it doesn’t account for women’s physiology differences. Women’s metabolisms run about 35 percent slower than men’s, which means they also give off less body heat.

Considering that women seem to function best when they’re not freezing — while men are not impacted as much by temperature differences — it may not be a bad idea to take air conditioning complaints a little more seriously.