Researchers Wire Monkey Brains Together to Make a Super-Brain 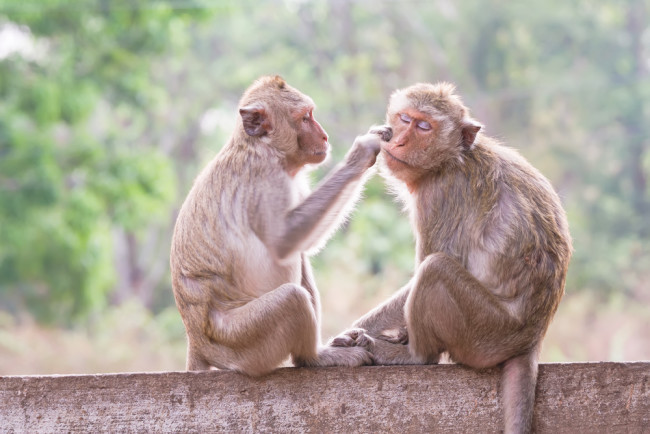 Brain-computer interfaces always sound incredibly futuristic. But this one is even wilder than most. In a pair of studies published Thursday, researchers say they’ve linked up multiple brains, of both monkeys and rats, to form an "organic computer." By literally putting their heads together, the networked animals performed simple tasks and computations better than an animal flying solo. The experiment could point toward future brain interfaces between people, allowing learning or collaboration to pass directly from brain to brain.

Telepathy, in a way, has been here for a while. Scientists already demonstrated that we can use brain signals to control mechanical devices like prosthetics or an exoskeleton. We can also transmit signals from one brain to another to control a person’s body movements. However, up to this point, no one had synced a network of brains together in order to accomplish a single task. Now, Duke researchers have, with the "Brainet." In one setup, Duke researchers implanted electrodes in the brains of four rats. Researchers beamed the same input signal to each rat’s brain, and a computer monitored each rat’s output signal. When the rats synchronized their output signal, they received a reward. Over time, the rats got better and better at synchronizing their output signals to operate like a basic computer. (Throughout the experiment the rats were fully conscious. When researchers tested the Brainet with unconscious rats, it didn't work — proving that rats to be active and aware in order for the network to operate.) Then researchers then tested the rats' computing power. In one experiment, for example, rats were given two different input signals: a single electric pulse, and a series of electric pulses. The rats were trained to emit synchronized brain activity for one signal and unsynchronized activity for the other. Collectively, they accurately matched the input to the correct output in 87 percent of the trials. That rate was far better than a rat trying to learn the same task on its own. Researchers’ rat network could even predict an increased or decreased chance of rain upon receiving temperature and barometric pressure information. The results appeared in Scientific Reports.

Researchers then shifted their focus to see if a rhesus monkey Brainet could move a computer-simulated arm to a ball. Two networked monkeys, each seeing the same video feed on a computer screen, used brain signals to control the virtual arm. A computer combined the brain signals from both monkeys to perform the task. Here’s the twist: Monkey A only controlled the horizontal movement, while Monkey B controlled the vertical movement. Despite disparate control of the arm, the monkeys learned how to meld their brain signals together to consistently move the arm to the right spot. In a super test of sorts, three monkeys were connected and tasked with moving the arm, but in three dimensions. Again, the monkeys learned to coordinate their brain signals and moved the arm to the right place. Results from the monkey trial was also published in Scientific Reports.

Brainets raise a host of mind-bending possibilities, as well as ethical concerns. For some time, the U.S. Army has investigated ways for soldiers to communicate via brain waves. In rehab centers, Brainets could someday help stroke victims re-learn how to control their limb by linking their brain to the brain of someone who still has full motor control. In the living room, gamers of the future might meld their brains together for fun. But, as the New York Times indicates, there are certainly ethical concerns to consider. If a company records players’ brain signals, could they steal the data? Our socially-networked world already poses a host of privacy concerns about the data we generate. Will neural privacy issues be the ethical concern of tomorrow? These are heady questions to think about. And, at least for now, you’re on your own.