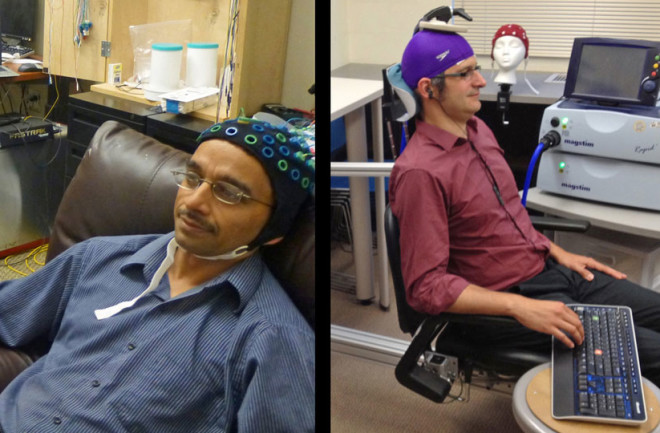 MEETING OF MINDS: Researcher Rajesh Rao (left) imagines firing a weapon in a video game. His neural signals are picked up by cap electrodes and transmitted via Internet to Andrea Stocco (right) across campus. Stocco’s cap turns the signal into a magnetic pulse, causing him to press the “fire” button. | University of Washington

The Vulcan characters in Star Trek were able to perform “mind melds,” wordlessly passing their thoughts into the brains of other people. This year saw three demonstrations of mind melding, although the information transmitted was simple motor commands.

In February, Duke University researchers reported they hadlinked the brains of two pairs of lab rats. When the first rat pressed one of two levers, either right or left, an electrode in its cortex picked up a signal. The researchers converted that signal to a set of pulses, which were transmitted over the Internet to an electrode implanted in the cortex of the second rat. That animal, already trained to differentiate between the two types of pulses, pressed one lever or another depending upon the signal it received. The receiving rat chose the correct lever 64 percent of the time — not perfect, but better than if the rat had flipped a coin.

Then Harvard University neuroscientists reported in April that people wired up to electroencephalography (EEG) devices had interfaced with rats. A person’s brain waves were converted to an ultrasound pulse, which was transmitted to a specific section of the rat’s motor cortex, causing its tail to swish.

And in August, University of Washington scientists announced the first successful brain-to-brain interface achieved in humans. Project leader Rajesh Rao wore an EEG cap while playing a video game. His associate, Andrea Stocco, connected by Internet across campus, positioned himself so that an electromagnetic pulsar touched the skull region above his left motor cortex. When Rao gave the command to “fire” through thought alone, his brain waves were picked up by a computer that then transmitted a pulse to Stocco. Upon receiving the signal, Stocco’s hand flicked down on the keyboard.

One day such mind melds might help stroke patients recover through physical therapy. “If you could transmit motor commands” from a recovered patient to one still on the mend, “the rehab process could be speeded up,” says Stocco. “It’s futuristic. We don’t know if it’s possible.”

[This article originally appeared in print as "Mind Melds Made Real."]