Probing Einstein's Brain for Clues to His Genius

Einstein's brain, preserved during autopsy, has been studied for decades. Some say it's time to give it a rest. 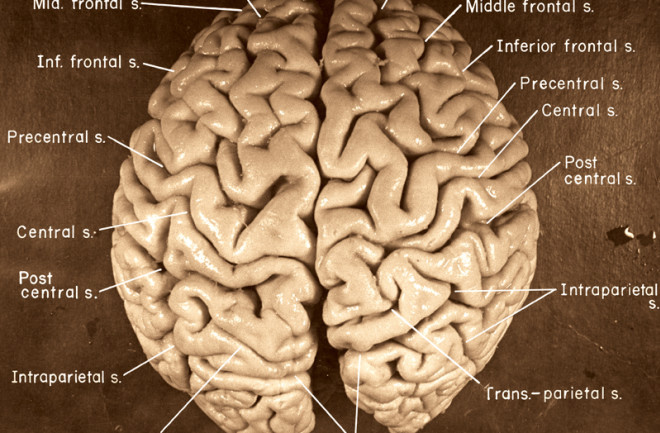 Before Harvey partitioned Einstein’s brain into 240 chunks, he photographed it from various angles. This is the top view. (Credit: Otis Historical Archives at the National Museum of Health and Medicine)

An elderly man pries open a jar and fishes out a dripping human cerebellum. He carves off a chunk with a kitchen knife and places it in a plastic pill bottle. Then, wiping a hand on his pants, the man hands the bottle to an admiring visitor.

The brain was Albert Einstein’s. The man was Thomas Harvey, a pathologist who in 1955 removed, photographed and preserved the great physicist’s brain during autopsy. In the decades since, the brain has enjoyed a certain celebrity. In the ’80s, Harvey gave away slices to the curious, keeping the rest in a pair of glass cookie jars. (These bizarre transactions appear in the 1994 documentary Relics: Einstein’s Brain.) In the late ’90s, he carried it across the country in a Tupperware container to offer it to Einstein’s granddaughter, who chose not to keep it. Finally, he gave it back to Princeton Hospital, where he performed the autopsy decades before.

Ever since, researchers have pored over chunks, slides and photos of Einstein’s brain, counting cells, measuring dimensions, describing shapes and comparing it with the brains of ordinary people. Every deviation from the purported norm became a potential explanation for Einstein’s genius: his uncanny thought experiments, his kinesthetic imagination, his mathematical and musical abilities.

But some experts think it’s all been a fool’s errand — that the haphazard state of the specimen, wishful thinking by its explorers and our murky understanding of the mind-brain link render these conclusions questionable.

The hope that studying a postmortem brain will reveal secrets about its owner’s mind is centuries old. The brains of Vladimir Lenin, Walt Whitman and mathematician Carl Friedrich Gauss were among the many removed for study. Nineteenth-century scientists fell into bitter debate as to whether intelligence lay in anatomy or whether a vital force — or even an immortal soul — was responsible for thoughts.

A philosophical divide persists to this day. Some researchers suggest this or that region of the brain corresponds to a mental faculty; others say it amounts to little more than phrenology, a 19th-century pseudoscience that claimed bumps on the skull could explain personality. The epithet dogs even some functional MRI studies, which seek to link specific thought processes to corresponding regions of the brain by measuring moment-to-moment differences in blood flow.

Those who would explore Einstein’s brain are well aware they’re treading potentially controversial ground. Nevertheless, they believe they’re on to something. In 1985, neuroscientist Marian Diamond of the University of California, Berkeley, reported the Einstein brain had extra cells called glia. These cells support the “thinking” neurons in the left parietal lobe, an area above and behind the left ear involved in spatial relations and mathematics. She speculated that this “might reflect the enhanced use of this tissue in the expression of his unusual conceptual powers.” Seven years later, a researcher in Osaka, Japan, suggested a link between that higher glia-to-neurons ratio and Einstein’s purported dyslexia.

These photographs show the left and right hemispheres of Einstein’s brain, viewed from the side and swiveled slightly toward the viewer. Labels refer to the parts of the brain. (Credit: Otis Historical Archives at the National Museum of Health and Medicine)

In 1999, neuroscientist Sandra Witelson reported an unusual configuration in the folds and grooves of Einstein’s parietal lobes, suggesting they may have developed earlier in life than usual. She wondered if that configuration might have something to do with the physicist’s skills in visual, spatial and mathematical thought. And Harvey himself co-authored a 1996 paper that suggested the brain’s higher density of neurons might make for faster communication between them.

In a 2013 analysis of the photos before the last paragraph, anthropologist Dean Falk counted four ridges (numbered 1-4) — one more than usual — in the right frontal lobe, an area associated with abstract thought. Researchers disagree about the significance of such anomalies. (Credit: Frederick E. Lepore)

Most recently, a 2013 Brain paper by Florida State University anthropologist Dean Falk described the brain’s surface. In examining Harvey’s autopsy photographs and comparing the brain’s appearance with 85 reference brains, she noted a number of intriguing features. For example, it had an omega sign, a knobby fold in the area of the brain that controls the left hand. This variant can be prominent in musicians who play stringed instruments. Einstein was an inveterate violinist.

From there it gets weirder. Part of the area controlling speech, called the Broca’s area, was unusually convoluted, and areas controlling the facial muscles around the mouth were enlarged (a finding reminiscent of the photo of Einstein sticking out his tongue). Falk noted extra convolutions in the frontal lobes, which are believed to be involved in thought experiments. The right superior parietal lobe, which receives visual and spatial information, was large, too. Co-author Frederick Lepore wonders if the parietal lobes were the locus of Einstein’s ability to envision space-time curvature.

“But there’s no way you could prove that, and we don’t. We just say it’s interesting,” Lepore says. “The brain is different from the run-of-the-mill human brain, and it just happens to be that this guy was arguably the genius of our epoch.”

“If you start out with the preconception of ‘This is the brain of somebody who’s really smart,’ you’re going to be able to find something that confirms your bias,” says Hines. Sloppy thinking pervades the Einstein’s-brain literature, he says.

A slide with a sliver of the famed brain. (Credit: Chris Helgren/Reuters/Corbis)

This spring, Hines published a scathing critique of nine Einstein’s-brain studies in Brain and Cognition. Diamond’s study on glia wasn’t blinded, he pointed out. Higher neuron density has also been reported in schizophrenics, making Harvey’s observation of dubious value. It’s far from clear that Einstein had dyslexia. And Falk, Hines says, hasn’t demonstrated that the unusual brain convolutions she found are due to anything but random variation.

Hines is not alone in his skepticism. Psychiatrist Lena Palaniyappan of the University of Nottingham sounds a note of caution about comparing different brains’ convolutions. If you’re analyzing brains from two different species, more convolutions do mean more smarts. But, he notes, no one has demonstrated such a relationship when comparing human brains. So it’s not clear what reports of extra convolutions in the Einstein brain really amount to.

That’s because structure tells only part of the story. Neural impulses race all over the brain, tying together both distant and adjacent structures moment by moment. Not taking those relationships between brain areas into account would be like trying to understand Manhattan’s commerce by studying buildings but not traffic patterns. These neural relationships are “so evanescent,” McKee says, “and it’s something that’s only captured by studies of function, which are not possible from a postmortem exam.”

Howard University physiology professor Mark Burke says the idiosyncratic way Harvey cut up the brain makes it hard to study, even with unbiased, state-of-the-art cell-counting techniques. He recalls his disappointing pilgrimage to the National Museum of Health and Medicine in Silver Spring, Md., where much of what’s left of Einstein’s brain now rests.

“I just kind of shook my head and said, ‘Wow,’ ” Burke recalls. “It’s a shame that it wasn’t done systematically.” The brain, he says, is of “limited scientific value at this point.”

But even if Einstein’s brain were intact enough to be plumbed with the tools of modern science, we might have to remain agnostic about the source of his brilliance.

Harvard neurology professor Albert Galaburda believes that even if we could resurrect Einstein, we still would not be able to explain his mind. “[If] he has some differences, you can’t tell that that’s why he became a great physicist,” he says. “Maybe it’s because that’s what doing physics does to your brain.”

This article originally appeared in print as "Between the Folds."