Nuclear Anxiety is Nothing New. Here’s How to Handle It

Russia’s invasion of Ukraine is fueling fears about the possibility of a nuclear war. But experts say this is far from the first time these worries have bubbled to the surface. 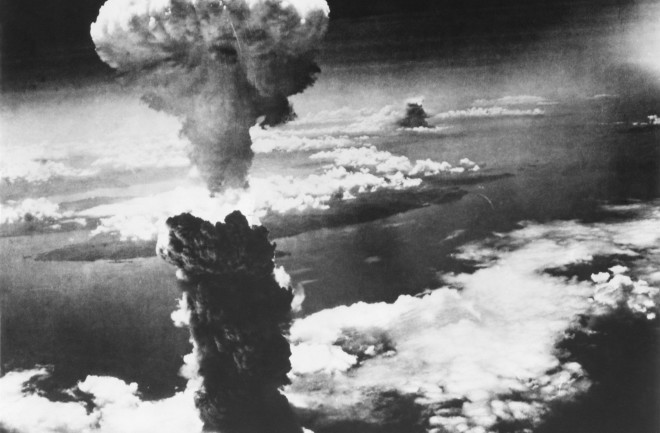 A mushroom cloud above Nagasaki after the U.S. detonated an atomic bomb above the city on August 9, 1945. (Credit: Everett Collection/Shutterstock)

If you look at the Google trends analysis for the term “nuclear war” over the past 30 days, it’s pretty hard to miss: On Feb. 24th, when Russia launched its invasion of Ukraine, the search term’s popularity soared. Just a few days later, it surged again, when President Vladimir Putin placed Russian nuclear forces on high alert — the first time its government had done so since 1991. And on March 4th, there was another spike, right after Russian forces captured a Ukrainian nuclear power plant in Zaporizhzhia.

Alex Wellerstein, a science historian at the Stevens Institute of Technology in New Jersey, is familiar with such signs of concern about nuclear war. In addition to his work studying the history of nuclear weapons, Wellerstein is also the creator of NUKEMAP, a website that allows users to model how much destruction different types of nuclear bombs might wreak if dropped on a given location. He says that NUKEMAP has seen well over 300,000 daily visitors in recent weeks — about 20 times the site’s normal traffic. In the days following the invasion, the site was so overloaded with traffic that it crashed regularly.

This undeniable rise in nuclear anxiety is perfectly understandable, too. Russia’s invasion of Ukraine isn’t just a humanitarian crisis; it’s also a conflict taking place in the shadow of the world’s biggest nuclear arsenals. While these stockpiles — built during the Cold War — may seem like relics of a bygone era, the threat they pose is very real. And scientists are still learning new things about their dangers. Beyond any immediate casualties, for example, the smoke and soot from the fires that would rage in the wake of a nuclear explosion could trigger a climate change that threatens both global food supplies and overall human health, according to a 2021 study in the Journal of Geophysical Research: Atmospheres.

For those who lived through the formative years of the Cold War, or even the early 1980s, the resurgence of these worries carries a distinct tinge of déjà vu. “It’s important to understand that the anxieties people feel are not new anxieties,” says Spencer Weart, a science historian and author of The Rise of Nuclear Fear. “They’re buried anxieties that are now coming to conscious awareness.” Still, tracing the predictable path that each new wave of nuclear fear tends to follow — and understanding its historical context — may help us better manage those anxieties today.

A Brief History of Nuclear Fear

It’s tempting to think that fear of nuclear war materialized out of thin air; to believe that it erupted, fully formed, into the public consciousness on August 6th, 1945, when the U.S. detonated an atomic bomb over the Japanese city of Hiroshima. But the seeds of those anxieties, Weart argues, were actually planted at the turn of the 20th century, when scientists and the general public were first learning about radioactivity. “All of those fears that people have about radioactivity and explosions were present before nuclear fission was discovered,” he says. “The first fictional depiction of an atomic war with atomic bombs destroying a city came from H.G. Wells in 1914.”

Similar sci-fi touchstones — the apocalypse, death rays, radioactive monsters, lone survivors stumbling through destroyed cities — originally had nothing to do with atomic weapons when they became embedded in popular culture. “All of that stuff was already there, and then attached onto atomic bombs,” says Weart. “Nuclear energy has terrific hooks for grabbing onto these old tropes, and they all clustered around it.”

Still, it wasn’t until 1945 that fears of atomic warfare became firmly cemented in the American psyche. “When Hiroshima came, it wasn’t just a fantasy story that bad people could destroy civilization. It was an actual reality," says Weart, adding that those fears redoubled when both the U.S. and Russia began developing hydrogen bombs in the early 1950s. “People make fun of the ‘duck and cover’ [drills] where you had everybody hiding under their desks, but it was a perfectly rational response to atomic bombs.”

In "Time Enough at Last," one of the most famous episodes of the original Twilight Zone series, a bank teller (Henry Bemis) finds himself wandering through the rubble of a post-apocalyptic world. (Credit: Public Domain/Wikimedia Commons)

That fear came in spurts, first peaking in 1962, during the height of the Cuban Missile Crisis, and then again in the early 1980s, when both Soviet and American leaders seemed to teeter on the brink of mutually-assured destruction. But in the intervening years, those Cold War anxieties thawed almost completely. “Fear of nuclear weapons just went off a cliff,” says Weart. “All the movies, novels and science fiction just disappeared. Nobody was talking about it anymore.” He cites a series of public opinion polls from that era on the world’s greatest problems; in 1963, nuclear war was at the top of the list, but by 1968 it had been replaced by other issues like environmental concerns and world hunger.

That same trajectory can be seen in more recent flare-ups of nuclear anxiety, albeit on a much smaller scale — like in 2017, when tensions between the U.S. and North Korea escalated into nuclear saber-rattling between the two nations. Wellerstein says that user activity on NUKEMAP also reached high levels during this crisis, but it didn’t last longer than a few days. “It makes sense that it’s cyclic, where it comes and goes, comes and goes,” he says. “As long as the threat is there, you’re going to occasionally have a crisis that makes people uncomfortable.”

How to Learn to Stop Worrying

Research on the psychological fallout of nuclear anxiety is limited, but some studies suggest it can come with real consequences, particularly among children and adolescents. A study published in 1986 found that fear of nuclear activity contributed to feelings of anxiety and even “shaped children’s views of the trustworthiness of society.” In addition, a study on Finnish teenagers during the 1991 Persian Gulf War found that those who frequently worried about nuclear threats were more susceptible to depression and anxiety five years later.

While the longer-term consequences of nuclear anxiety are still largely unknown, there’s plenty that you can do to soothe your own fears in the short term. The International Campaign to Abolish Nuclear Weapons (ICAN) recently released a blog post detailing tips for managing anxiety, such as focusing on clear, indisputable truths — like the fact that nuclear war hasn’t actually begun — or simply focusing on your own breathing. “It’s totally acceptable to be afraid or anxious,” says Wellerstein. “But you want to make sure that doesn’t turn into a panic.”

Roxane Cohen Silver, a professor of psychological science at the University of California, Irvine who researches media coverage and trauma, stresses that it's important to monitor your own media consumption of crises like the conflict in Ukraine and avoid exposing yourself to graphic images or videos that may ramp up feelings of fear and anxiety. "I have not seen any images of the war," she says. "I have not clicked on any videos. When I read the content on my computer, my eyes gaze away from those pictures. I'm a very conscious consumer. And yet I still think I can stay informed."

Lovely Umayam, a nuclear nonproliferation expert who researches nuclear weapons at the Stimson Center, a think tank in Washington D.C., echoes many of the same points — adding that it's important to allow yourself to process the emotions that you're feeling before defining your information tolerance. Beyond that, discussing your concerns about nuclear weapons with family and friends can be a healthy way to maintain agency in the face of a crisis. "I'm hopeful," she adds, "that we will find agency as opposed to 'ducking and covering.'"

More From Discover
The Sciences
Was Nefertiti Egypt’s Leading Lady Before King Tut?
Planet Earth
These 5 Animals Trip on Psychedelic and Psychoactive Drugs, Too
Planet Earth
We’ve Been Worried About Overpopulation for Millenia
Technology
What’s Dynamic Pricing? An Operations Management Scholar Explains
Health
Decorate For the Holidays Early and it Might Improve Your Mood
Health
How These Top 10 Favorite Thanksgiving Dishes Impact Your Health
Recommendations From Our Store
My Science ShopDiscover STEM Kits
My Science ShopDiscover 2022 Calendar
My Science ShopStrange Science
My Science ShopElements Flashcards
Shop Now
Stay Curious
Join
Our List