My Own Worst Enemy

Why we act against our better judgment. 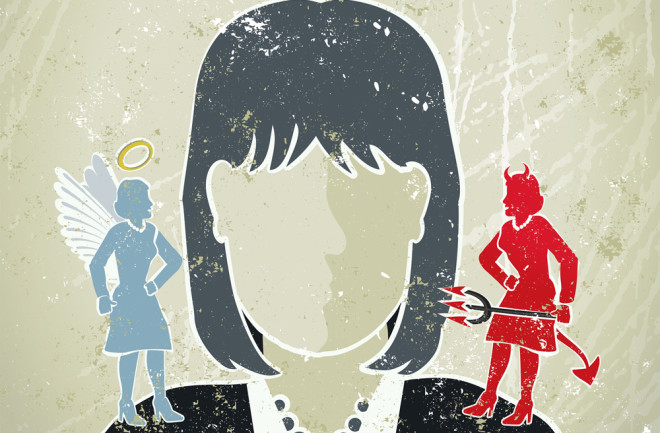 I get a little pain in my knee when I walk down stairs or run long distances. The problem has gotten worse with age but has an easy fix — a short series of strength exercises. If I do them a few times per week, I’m pain-free.

The routine takes only about 15 minutes, and I can do it at home. Even so, I just can’t seem to make it a habit. I tell myself I’ll do it at the end of my workday, but when 5:30 p.m. rolls around, I often find myself unwinding with a run or a beer instead. “I’ll do the damn exercises tomorrow,” I promise myself. But the pattern repeats itself the next day, and often the next, sometimes until my knee starts hurting again.

Greek philosophers have a word for this behavior: akrasia, the state of acting against one’s better judgment.

While akrasia is sometimes called “weakness of will,” recent research suggests that it’s not a personal failing, but a result of a cognitive bias that strike us all — “time inconsistency,” our tendency to discount the future in favor of the present.

George Ainslie, a psychiatrist at the Veterans Affairs Medical Center in Coatesville, Penn., and behavioral economist at the University of Cape Town in South Africa, has spent decades studying akrasia. He’s found that if you give people a choice between a smaller, more expedient reward and a larger delayed one, timing has an interesting impact on their decisions.

“If you pretend it’s a game show and you offer people $50 today or $100 in two years, when you ask how many people would prefer $50 today, a lot of people raise their hands,” Ainslie says.

But if people can choose between receiving $50 in six years or $100 in eight years, nobody wants the $50, he says, even though it’s the same choice, just spread over a different time period. Such results show that people discount the future in an inconsistent way that gives preference to smaller, more immediate rewards, Ainslie says.

I choose happy hour over my knee-strengthening exercises because the pleasure of beer is immediate, while the pain I’ll prevent with my gym routine isn’t.

Battle of the Selves

“We all do it; it’s part of our nature,” says Piers Steel, a psychologist at the University of Calgary and a leading researcher on one of akrasia’s most common manifestations: procrastination.

Long-term planning, such as saving for retirement or committing to an exercise plan, is done in the brain’s prefrontal cortex. “Then we have the limbic system,” Steel says, “which is much more compulsive and focused on the here and now.” One way to see it, he says, is to think of our brain as a house with two floors, each with a different set of residents. The limbic system is the young, hip couple on the ground floor who are “energetic and passionate, and focused on the present,” he says. Meanwhile, the prefrontal cortex is the older couple upstairs who pay the mortgage and keep the house in order.

Akrasia is essentially a one-player game against your future self, says Daniel Reeves, who applied his Ph.D. in algorithmic game theory to co-found Beeminder.com, an anti-akrasia tool. For example, my present limbic system-influenced self would rather surf the Internet than write this story. But my future prefrontal cortex-influenced self would rather finish the story so my check arrives on time. To overcome akrasia means to ensure the future-oriented self overrides the present-oriented one, Reeves says.

A handful of tools exist to help bridge the gap between your future and present selves. Such tools create an immediate payoff for desired behavior and a short-term punishment for choices that derail long-term plans.

For instance, when I record my knee exercises on Beeminder, I’m more motivated to stay on track because logging a completed knee-strengthening session makes me feel productive and helps me avoid the unpleasant feeling of having nothing to report when the app sends a reminder.

As an extra incentive, Beeminder and another online goal-tracking tool, Stickk.com, charge users money if they don’t complete their goals.

Along the same lines, Habitica.com turns habit-tracking into a video game by representing each of your goals as monsters that you’re on a quest to conquer.

Even banks are jumping on the anti-akrasia bandwagon. A series of studies published in the Journal of Marketing Research in 2011 found that participants who saw computer renderings of their future selves tended to pick monetary rewards promised later instead of picking more immediate ones. Financial company Merrill Lynch took a cue from these findings and has a project underway to motivate people to save more retirement money by showing them digitally aged photos of themselves.

Steel argues that our modern environments have made us more susceptible to akrasia. “We’re not really designed to have temptation constantly at our fingertips,” he says. Those of us who work on computers know this all too well: The Internet ensures we have time-sucking distractions constantly competing for our attention. And since the 1970s, researchers have “seen about a 500 percent increase in chronic procrastination,” Steel says. So if we really want to tame akrasia, we need to change our environment.

“You never want the same cues for play and for work,” he says, because if you set yourself up to choose between play and work, play always feels more enticing.

When I use the end of my workday as the cue for doing my knee-strengthening routine, I’m pitting it against more tempting choices. Of course I’ll choose a relaxing drink on the front porch over a boring workout in the home gym. But when I shift my cue to the morning before I start my workday, it’s easier to stick to my good intentions. That’s because the gym, where I can listen to music or my favorite podcasts, feels more alluring than the alternative: work.

It’s a clever solution, but it’s not always possible. Some days, I need to get to work early and don’t have time for my strengthening routine. In that case, I’ve found success with another trick from Steel: delay. “Sometimes just a minute or two delay of the temptation makes you far more likely to make a rational choice,” he says. He’s currently experimenting with computer programs that add a delay before users can access common distractions. “You can get your email, but you have to wait 20 seconds,” Steel says. So far, the results show that even a short 20-second delay can help people make better choices.

And that strategy is working for me, too. Doing my exercises after work is much easier after I decide that, if I skip them, I can’t do anything else during those 15 minutes. As much as I hate the exercises, I like them better than doing nothing. So, off I go to do the damn exercises now so I can run pain-free later.