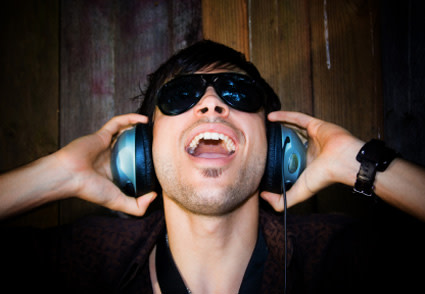 Those delicious chills you get as your favorite piece of music reaches its climax? They're the result of a glorious spike of dopamine in your brain--that's the same neurotransmitter that's involved in reward, motivation, and addiction. In a nifty series of experiments published in Nature Neuroscience, researchers determined that music provokes floods of dopamine in music lovers. Study coauthor Valorie Salimpoor notes that dopamine has long been known to play a role in more physical activities like taking drugs and having sex, but this research highlights its role in other aspects of our lives.

"It is amazing that we can release dopamine in anticipation of something abstract, complex and not concrete," Salimpoor said. "This is the first study to show that dopamine can be released in response to an aesthetic stimulus." [Discovery News]

The researchers first identified eight music loving volunteers who reported consistently experiencing chills of pleasure when listening to their favorite music (most of the subjects were classical music fans, but a few fancied jazz or rock). The subjects then listened to their musical selections while undergoing PET scans

After 15 minutes of listening, scientists injected participants with a radioactive substance that binds to dopamine receptors. With a machine called a PET scanner, the scientists were then able to see if that substance simply circulated through listeners' blood, which would indicate that they had already released a lot of dopamine, and that the dopamine was tying up all available receptors. If most of their dopamine receptors were free, on the other hand, the radioactive substance would bind to them. [Discovery News]

The results showed that the subjects already had more dopamine than usual swishing through their systems. When the experiment was repeated with the subjects listening to "neutral" music that didn't move them, the PET scans showed less dopamine and more free receptors. Next, the researchers gave the music lovers fMRI scans to see which parts of their brains would light up as the pieces of music reached their emotional peaks, and found that two different regions of the brain registered increased activity.

Dopamine surged in one part of the striatum during the 15 seconds leading up to a thrilling moment, and a different part when that musical highlight finally arrived. Zatorre said that makes sense: The area linked to anticipation connects with parts of the brain involved with making predictions and responding to the environment, while the area reacting to the peak moment itself is linked to the brain's limbic system, which is involved in emotion. [AP]

Does this explain why teenagers are so passionate about their music? Why Grateful Dead fans followed the band from town to town? Why a devoted opera buff will see endless productions of Wagner's Ring Cycle? It certainly seems like a step in that direction.

Salimpoor and her colleagues concluded: "If music-induced emotional states can lead to dopamine release, as our findings indicate, it may begin to explain why musical experiences are so valued. These results further speak to why music can be effectively used in rituals, marketing or film to manipulate hedonistic states. Our findings provide neurochemical evidence that intense emotional responses to music involve ancient reward circuitry and serve as a starting point for more detailed investigations of the biological substrates that underlie abstract forms of pleasure." [The Guardian]

80beats: Slot Machine Near Misses Are Perfectly Tuned to Stoke the Addiction

DISCOVER: Is Music for Wooing, Mothering, Bonding--or Is It Just "Auditory Cheesecake"?