Multiple Personalities, Blindness and the Brain

A new paper reports the fascinating and perplexing case of a woman who reported that she was host to multiple personalities – some of whom were completely blind. The paper is called Sight and blindness in the same person: gating in the visual system, authored by German psychologists Hans Strasburger and Bruno Waldvogel. 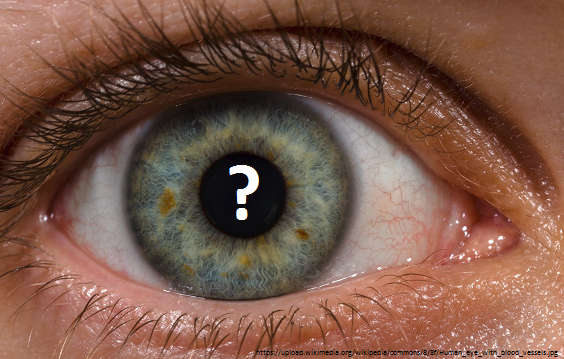 The patient in this case, “B. T.”, aged 33, has a diagnosis of dissociative identity disorder (DID), a condition formerly known as multiple personality disorder (MPD). B. T. originally became blind (or seemingly so) following an accident at the age of 20. Her eyes were not damaged in the accident; instead, doctors attributed her loss of vision to brain damage: cortical blindness.

Years later, B. T. entered psychotherapy for her DID. In therapy, she manifested ten different identities or personalities, which differed in “name, reported age, gender, attitudes, voice, gesture, facial expressions” and other characteristics. Such a multiplicity of selves is not uncommon in DID patients.

But in B. T.’s fourth year in therapy, something unexpected happened: she regained her sight – but only some of the time. Some of B. T.’s personalities became able to see, while others remained blind. Strasburger and Waldvogel write that “Sighted and blind states could alternate within seconds.”

Now, by itself, this would be an odd psychological case study, but rather difficult to interpret, because the whole case would revolve around B. T.’s self-reports of her blindness. For instance, one interpretation would be that B. T. was malingering, for instance – that she had “made up” the blindness, and possibly also the extra personalities.

But Strasburger and Waldvogel present some remarkable evidence that seems to exclude malingering as a possibility: they show that when B. T. was “blind”, her brain actually didn’t respond to visual stimuli. To do this, they used EEG to measure visual evoked potentials (VEPs). A VEP is an electrical response generated in the visual cortex of the brain in response to stimulation. The absence of VEPs is suggestive of blindness.

Strasburger and Waldvogel show that B. T.’s brain generates normal VEPs when she’s in a “sighted” personality state, but that when she’s “blind”, there is a total absence of VEPs: 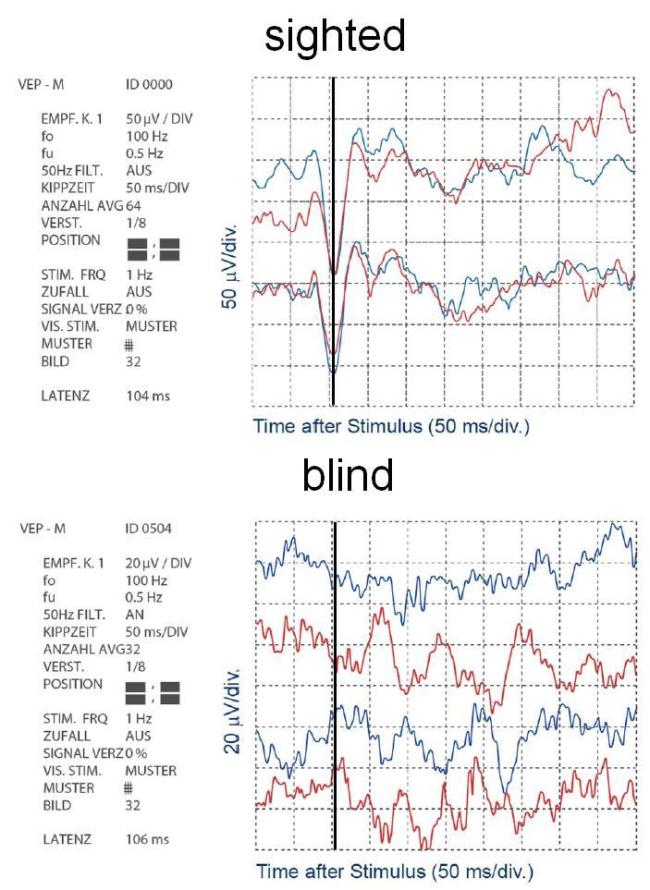 In the “sighted” condition, a sharp downwards peak is visible at approximately 100 milliseconds after the stimulus is presented. But the same stimulus evokes no detectable response in the “blind” condition.

This is really quite something.

The authors say that B. T.’s blindness must have a “psychogenic” origin, because of how quickly it comes and goes. No known biological process could cause such a rapid alternation between blindness and perfect vision (recall that B. T. can go from one state to another “within seconds.”)

So what could be going on? Strasburger and Waldvogel say that the answer may lie in processes that exist in the normal brain to temporarily “block out” visual input:

The phenomenon of a temporary suppression of the afferent neural signal in the healthy human that is reversible at any time is more common than it would first appear. Images of the two eyes that contradict each other temporarily, for example, when squinting or with dichoptic stimulation, lead to a transient, partial or full, suppression of one eye’s image…

So brain mechanisms are present that allow modulation of the incoming information, acting on either the entire visual field or some parts thereof.

On this view, B. T. not only genuinely believes she is blind – she really isblind (some of the time.) Some neural pathway is active which prevents visual information from reaching her brain. Her blindness is “psychogenic” but also very real.

Are there any more prosaic explanations? My first thought on reading this paper was ‘what if she’s just closing her eyes, or looking away?’, but Strasburger and Waldvogel say that an experienced VEP tester was observing her during the procedure to make sure she was looking at the stimuli. Furthermore, they note that B. T. got a VEP test when she first went blind, and that infrared eye-tracking was used to verify that she was looking at the stimuli. No VEPs were detected that time.

The authors do note, however, that it’s theoretically possible that B. T. could have been (consciously or unconsciously) de-focussing her eyes in such a way that all visual input was blurry. They note that this would not be easy for an observer to spot, but they say that it would have to be an extreme level of de-focussing to blur out the stimuli used in a VEP test, which are large and very bright. Still, I would want some further testing to exclude this possibility before I was convinced by the “neural gating” hypothesis.