That feeling like your heart has been ripped out of your chest? Turns out you’re not just being melodramatic. Being lovesick can impact your mental and physical wellness, but there are ways to get relief. 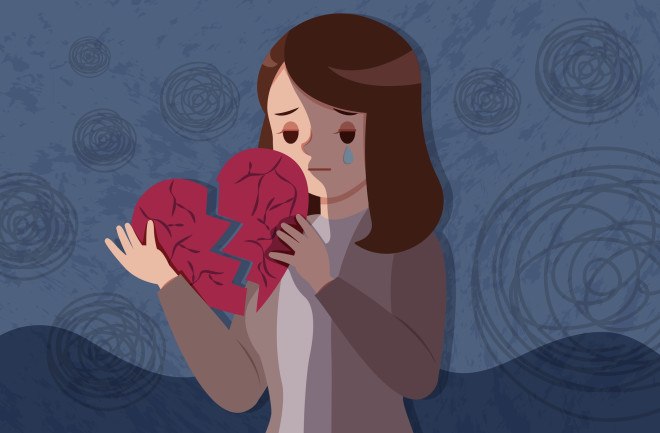 Love is inescapable. Intertwined in history, novels and movies, love is ever-present in our daily lives. But just as love can lift us up, it can bring us down.

Whether it is unrequited love, a nasty breakup, or even problems in your current relationship, periods of depression, longing, and hopelessness may follow. Heartache holds the potential to interfere with your life to the point that can impact your mental and physical wellness. In fact, being lovesick can feel exactly like that — an illness.

Lovesickness in the Middle Ages

Medieval physicians thought lovesickness was a medical condition caused by sexual desire and the sight of beauty. Mary Wack, author of Lovesickness in the Middle Ages: The "Viaticum" and Its Commentaries, describes the illness as “fearsome, sometimes fatal.”

People back then believed that lovesickness caused an imbalance in the body. Medical ideas in the Middle Ages were based on four bodily humours: blood, phlegm, black bile and yellow bile. In a healthy person, all four humours were perfectly balanced. A disturbance to this balance could predispose someone to succumb to lovesickness. If left untreated, lovesickness was thought to have serious consequences, including losing one’s genitalia, death, or eternal damnation.

When Love’s Got You Down

We now know that you won't face eternal damnation from being lovesick, but the phenomenon is still recognized in psychology. Psychologist Dorothy Tennov coined the term limerence in 1979 to describe what is essentially lovesickness — intense romantic attraction and an obsessive need to have the attraction reciprocated.

These effects may be aren't all that surprising. In fact, romantic love might even be downright addictive. A 2016 study found there are many similarities between the early stages of romantic love and drug addiction. People in the early throes of love have the pleasure chemical, also known as the neurotransmitter dopamine, flooding the brain’s pleasure and reward centers. As the relationship continues, love and validation are needed to keep the high going. When the relationship reaches an end, lovesick individuals face effects similar to those felt during a drug withdrawal.

Addiction psychiatrist David Sack, writing in the Huffington Post, says some signs of lovesickness can include:

While some of these symptoms may seem harmless, Slack explains that they can morph into something more serious. Self-doubt, insomnia, and intrusive thoughts are often the calling cards of major depression. In addition, long-term exposure to anxiety and stress can put people at a greater risk for heart disease and stroke.

The Cure for Lovesickness

Lovesickness can feel like a rollercoaster ride, thanks to brain chemicals being thrown out of whack. But is there a way to put an end to the agony beyond the healing balm of time?

The idea of a cure for a broken heart is practically as old as love itself. Ancient cures for love centered on phlebotomy, exercise, bloodletting, avoidance of rich foods or wine, and drinking plenty of water. Modern treatments tend to focus on addressing mental woes. A study published in the Journal of Experimental Psychology: General explored a variety of cognitive strategies that worked the best for helping people get over a breakup.

Three emotion regulation strategies were evaluated in the study: negative reappraisal, or highlighting negative traits of one’s ex-partner; reappraisal of love, or accepting romantic feelings toward an ex; and distraction, or thinking about positive things unrelated to an ex.

The participants, all recovering from a breakup, tried each regulation strategy. Then, they were shown a picture of their ex-partner while an electroencephalogram (EEG) machine recorded electrical activity in their brains. Negative reappraisal was found to decrease romantic feelings and brain activity in response to seeing ex-partner photos, but the approach made participants feel more unpleasant overall. Love reappraisal did not change how in love they were and didn't provoke pleasant or unpleasant feelings, but it did dull their brain's response to the photo. Meanwhile, distraction did not change feelings of love or lead to brain activity changes when seeing ex-partner’s photos. But overall, participants reported that distraction benefited their mood.

The study concluded that negative reappraisal may be an effective approach for decreasing romantic feelings toward an ex. Distraction, on the other hand, can elevate mood during a breakup. It all boils down to changing the way one thinks. While lovesickness may not heal overnight, cognitive and behavioral techniques to change one’s thinking can put someone on the road to recovery.