For centuries, the bleeding edge of medical practice involved leeches, lancets and draining perfectly good blood from already-ailing patients. Was there ever a scientific method to this madness? Sort of. 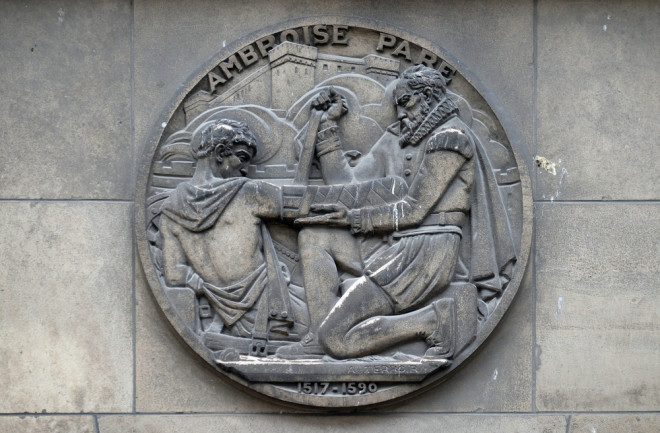 Consider the once-ubiquitous practice of bloodletting. From the days of ancient Egypt until well into the nineteenth century, bleeding was the standard therapy for a multitude of conditions. Had a stroke? Break out the leeches! Diabetes? Time to slice open a vein! Jaundice, scurvy, epilepsy, the plague, pneumonia, gout, leprosy, asthma, post-surgical inflammation — whatever ailed you, the first line of treatment was probably exsanguination. Even a bad case of acne could earn you a trip to the barber-surgeon, where you would be bled until you passed out.

Now, our ancestors were no fools. They understood as well as we do that blood loss could send a patient into shock. Why willingly subject sick people to something that would further debilitate them? Because our forebears were following a system — a logical, internally consistent theory of human health that begat an all-pervasive, obsessively-categorized model of the workings of the universe. Coherent, elegant and (mostly) wrong-headed, humoural theory — which held sway in Europe until the Renaissance, and key ideas of which persisted for centuries afterward — is, more than anything, a cautionary tale about the human tendency toward systematic thinking.

The ancients knew from observation that the human body is essentially a sack filled with various fluids, but it was Hippocrates, the so-called father of medicine, who laid the foundations for humourism around the fourth century BCE. Perhaps observing how a test tube of blood will naturally separate into four layers, he identified four fundamental substances of which he imagined the human body to be composed: black bile, blood, yellow bile and phlegm.

These four humours are best described as semi-imaginary. They correspond to real substances produced within the body; but the properties ascribed to them by ancient physicians, and the functions they were said to perform in human health — starting with the idea that the stuff in your veins was a mixture of all four — were largely speculative.

When the proportions of your mixture were out of whack, your health suffered. An excess of yellow bile, for instance, caused rheumatism; too much black bile caused cancer. Galen identified each humour with a particular organ — black bile with the spleen, blood with the liver, yellow bile with the gallbladder, phlegm with the lungs — then with one of the four classical elements of earth, air, fire and water, and by extension with the dualistic qualities of matter. Each element, and each humour, was defined as either cold or warm, and either moist or dry. Blood, for instance, was identified with air, with warm and moist qualities, while black bile was associated with earth, cold and dry.

Every Man in His Humour

Even human psychology was explained by four basic personality types, each defined by a dominant humour. Our language still reflects the influence of these concepts. Even today, we call a gloomy person melancholy (from the Latin for black bile), or say that a stoic person is phlegmatic; a coward is lily-livered because they lack sufficient blood to give them a bold (or sanguine) temperament; bile is still synonymous with anger.

Under later medieval thinkers, the system expanded to encompass the entire physical world. Each humour was identified with one of the seasons, a particular time of day, a point on the compass and with certain plants, animals and minerals. Every planet, every constellation and every astrological sign had a corresponding humour.

In theory, eating the proper foods would encourage production of a particular humour; raw vegetables would boost phlegm, for instance, while grilled meats engendered yellow bile. Both Hippocrates and Galen used humoural theory to manage health through nutrition — advising a balanced, seasonally appropriate diet of different kinds of foods in proper proportion, ostensibly to maintain a healthy ratio of humours.

But methods effective in one context can be disastrous when misapplied. Things went off the rails for humourism when medieval physicians took a lifestyle meant to maintain wellness and tried to turn it into an intervention to cure acute conditions. Rather than topping off one humour with a special diet, they thought to correct imbalances by purging any excess of the others. If there wasn’t enough blood in your mix, for instance, enemas would be prescribed to draw out black bile, along with vomiting to bring up yellow bile. A rubdown with blistering agents would bring on weeping pus, which was taken for a release of excess phlegm. And there was always bloodletting, to correct your ratio even as it reduced your overall volume.

A Different Kind of Truth

Why did humourism persist for hundreds of years when the results were (charitably) hit-or-miss? Because it provided a logical framework for understanding the world. Humourism was what philosophers call a theory of everything; a comprehensive framing that lent order to a complex and chaotic universe, and placed mankind at the center of it — which made it very comforting to the God-oriented medieval mind, even if the fundamental proposition was incorrect.

To our modern way of thinking, empirical observation and the scientific method may seem like the only path to truth; but for medieval thinkers, the consistency and rigor of a theory were themselves the only necessary proof of its correctness. The physical sciences still operated under the rules of philosophy, where truth is more a matter of logic than of evidence. Physicians placed their trust in the system, regardless of the results. To change the way we practiced medicine, it was first necessary to change the way we thought about capital-T Truth.