Love in The Hunger Games: Why Katniss Falls for Peeta 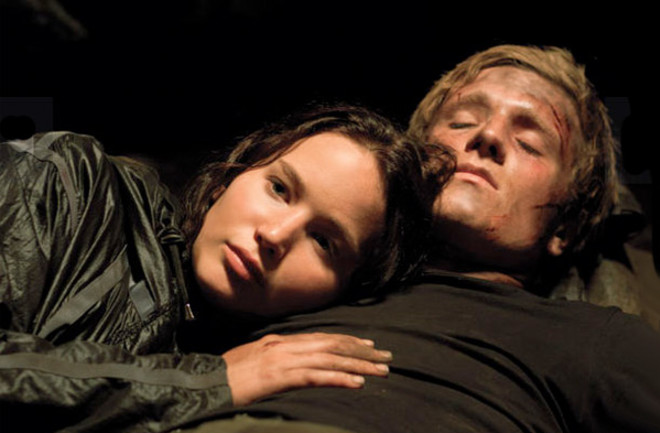 This article originally appeared on Dr. Goodfriend’s blog “A Psychologist at the Movies.”

I’m completely obsessed with The Hunger Games. I’m not sure why. Maybe it’s because I have visited North Korea, a real country where millions of people really are dying of hunger. Maybe it’s the ironic meta-experience of watching the movie’s violence on a huge screen, when the movie’s point is that people shouldn’t watch violence on a huge screen. Regardless, The Hunger Games is chock-full of possible psychological analysis. Today I’m focusing on the fascinatingly weird emotions that spark between the The Hunger Games’ two main protagonists, Peeta and Katniss.

At home, Katniss has a boyfriend, a young man named Gale. He has rugged good looks, he’s brave, and they are perfectly matched in many ways. Both Katniss and Gale fight against the system in their own way (which is increasingly seen as the trilogy continues), and he is always successful at making Katniss feel comforted in a world with no comforts.

So why does Katniss later fall for Peeta? Peeta certainly has lovable qualities – he’s smart, nurturing, and can frost a cake like nobody’s business – but he and Katniss are not exactly a natural pair. Their personalities clash, their goals in life are different, and Katniss really isn’t interested in any kind of frivolous romance. Sure, in the first movie she is ambivalent about her feelings for Peeta, the kind-hearted boy with a sexy baby-faced look. But psychology would have predicted their blossoming feelings for each other due to their experiences together in the Hunger Games. It’s all because of a phenomenon called misattribution of arousal.

In a classic social psychology study conducted in 1974, a female experimenter waited around next to two bridges. One of the bridges was low and sturdy – very safe. The other bridge was “shaky” and high – you know, like one of those bridges in Indiana Jones, where you’re constantly afraid that the wooden boards and ropes will break and you’ll fall to your death. Whenever a man would cross one of these bridges, the woman would pretend to be interested in their answers to a series of questions. But the study was really all about whether the men would be physically attracted to the woman, which the researchers measured by recording how many of the male bridge-crossers called the woman later.

You can probably predict what happened in this study: More men called the woman from the group that had crossed the shaky, scary bridge. Why did that happen? The woman was the same in both conditions. The answer, according to Dutton and Aron (and tons of later researchers who have tested this phenomenon in other ways), is the misattribution of arousal. Here’s how it works…

So the researchers argued that, because we experience these physiological symptoms of arousal in several different settings, sometimes our cognitive interpretation of the symptoms can be incorrect. You might be scared or anxious and mistakenly interpret the signs as being attracted to someone who happens to be around. For the men on the shaky bridge, they thought they were attracted to the female experimenter – so they called her; this happened significantly more times than the men on the safe bridge who were looking at the exact same woman.

So, back to the main point: The Hunger Games. Peeta and Katniss are certainly in a scary environment. They’re surrounded by twenty-two other teenagers who are literally trying to kill them as soon as possible. They are both wounded; they could die at any moment. Adrenaline is pumping through them. According to misattribution of arousal, this physiological arousal could be mistaken for sexual arousal. Peeta and Katniss will fall in love.

Because I’ve read the books, I can tell you that we’ll see this pattern come back in the second movie as well (although I don’t want to give too much away, as I hate spoilers). Katniss is constantly around Peeta in times of physical stress. The Hunger Games is like a shaky bridge, made a zillion times worse. She almost couldn’t help becoming attracted to him, even if she wouldn’t have been under other circumstances.

I’m excited to see the next movie. My advice to readers, of course, is that if you’re going on a date and you want your date to like you, there’s always psychological manipulation in your romantic toolkit. Take your date to a scary environment, like a horror movie, haunted house, or a roller coaster. These environments will get your date’s body racing, and he or she might become more attracted to you! Those are probably better options than hiring a couple dozen teenagers to try to murder your date. ’Cause I feel like that could go wrong in a lot of different ways.

Wind Goodfriend, Ph.D., is a social psychologist at Buena Vista University, with research expertise on stereotypes and on romantic relationships.