In a Sensory Hack, What You Touch Affects What You See 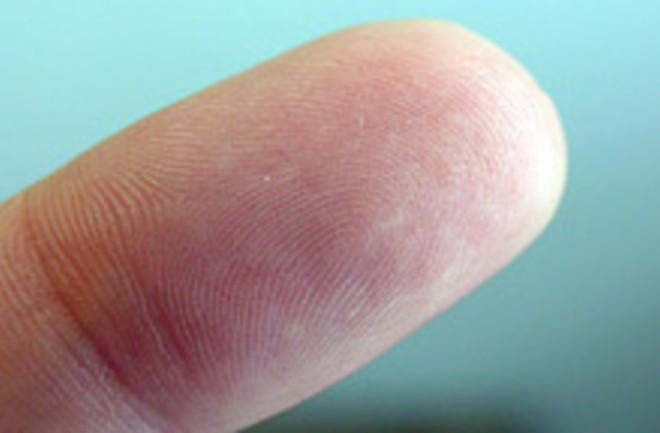 Scientists have found that manipulating a person's sense of touch can confuse their sense of sight, an intriguing finding that suggests that touch and vision are

integrated in the human brain.... For decades, instructors in medical schools have taught students that the senses —including vision, touch and sound — are interpreted in different, discrete parts of the brain, says Michael Beauchamp of the University of Texas Medical School at Houston. “Now it turns out what we’re teaching them is wrong,” he says. “There’s a lot more cross talk between the modalities” [Science News].

In the experiment, which will be published in an upcoming Current Biology, researchers used a postage stamp-sized device that used tiny pins to stroke the test subject's finger in either an upward or downward direction.

When subjects watched a stationary stripe on a computer screen after a machine stroked their fingertips, the motion of the stroking created the illusion that the stripe was moving [ScienceNOW Daily News].

The illusion also worked in the opposite direction:

People who watched lines on a screen move up were more likely to interpret patternless touches from pin rows as moving down. “These two things [touch and vision] are able to push each other around more than we thought" [Science News]

, says lead researcher Christopher Moore. Previous experiments over the past five years have hinted that the senses can become entwined.

Experiments with blind subjects, for example, have found that reading Braille by touch can trigger activity in the brain's visual cortex.... [But researchers] attributed the phenomenon to the brain rewiring itself to compensate for disability [ScienceNOW Daily News].

The new study suggests that the sight-touch linkage may be present in everyone's brain. Related Content: 80beats: Revealed: The Genetic Root of Seeing Sounds and Tasting Colors 80beats: Fingerprints Are Tuned to Amplify Vibrations and Send Info to the Brain DISCOVER: The Blind Climber Who "Sees" With His Tongue