Research shows most people want to intervene when needed, and being a good bystander takes practice. 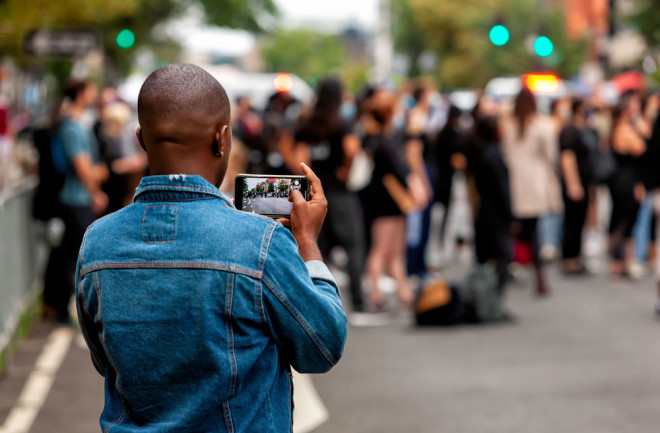 You’re standing in a grocery store when you witness a man use abusive language towards his girlfriend. You’re on the subway when a woman screams an ethnic slur at the man sitting across the aisle from her. Or maybe you’re at a cocktail party and your colleague makes an inappropriate comment about another coworker. These are all circumstances in which bystander intervention could impact the outcome. But unfortunately, when we’re confronted with a situation, we may not know how best to react.

The good news is, there’s a “popular myth” that when people are standing in a crowd and something bad happens, they’re unlikely to react, says Alan Berkowitz, who is an expert on the bystander effect and the author of Response-Ability: A Complete Guide to Bystander Intervention. But the latest research on bystander intervention shows that most people feel compelled to help when they can. When they don’t help, it’s because they either don’t feel they have the skills to do so, or they’re unsure of the context or safety of the situation.

Being a good bystander takes practice, but you can prepare yourself to be ready when the time comes.

“It’s about offering people a range of skills and options so they feel comfortable personally, culturally and in the situation,” says Berkowitz.

Indirect intervention or distraction is a good place to start. Berkowitz uses an example of a group of men on a college campus harassing a woman. A bystander can intervene by playing dumb and asking the men for directions. While the person is engaging the men, the woman can walk away without issue.

Another example, happened to Berkowitz in a grocery store. A man was verbally abusing the woman he was with at the time. To deflect the situation, Berkowitz, who was standing in the produce section of the store, started asking the man how to choose a ripe watermelon. It changed the subject enough so that the temperature of the encounter dropped substantially.

“There are many ways to de-escalate a situation without directly confronting someone,” says Berkowitz.

He contends that confrontation can be appropriate when you feel comfortable doing it. In certain situations, telling someone that their remarks offended you can be helpful.

“In some cases, you can give direct feedback about how a behavior made you feel, for example, if you have a relationship with that person and they’re willing to listen to you,” says Berkowitz.

In cases where you witness police brutality or some other kind of violence, your response may change. “The more a situation is escalating, the more you have to be careful not to intervene in a way that could cause you or the victim harm, unless you’re willing to take that risk,” says Berkowitz.

That said, Berkowitz notes that it’s often bystander events with negative outcomes that make the news, even though thousands of bystanders are positively impacting the outcomes of negative situations everyday. We’re just less likely to hear about it, he says.

The Five D’s of Being An Active Bystander

In situations where you feel uneasy, consider enlisting the "Five D’s” of an active bystander, says Thomas Vance, a certified counselor and faculty member at the New School.

“Distract, delegate, document, delay or direct,” says Vance. “The key is to move from a bystander to an ‘active bystander’ who chooses to challenge inappropriate behavior.”

You can challenge the behavior indirectly or directly as Berkowitz noted above, or you can videotape it on your cell phone, or somehow record it to document the situation, says Vance. If your co-worker makes an inappropriate comment, for example, you can write it down in a notebook to document it and later report it to a superior or human resources. Just being visible is another form of documentation, a way of showing a would-be perpetrator that you’re there and watching the situation unfold, he says.

As another option, you can delegate, or ask someone else in the group to act. For example, in a situation where you witness brutality, you can tell someone else to notify the authorities, or to call 911. Asking someone in the situation whether they’re okay, or if there’s anything you can do to help, can also delay and therefore de-escalate a situation.

It’s about assessing the circumstances, says Vance, because in the end, “no two situations are alike” but it’s best not to assume that someone else in the crowd is going to act. Don’t depend on others to be the active bystander, he says. Especially when you have tools in your bystander toolbox to step up, instead of regretting your failure to do so later on.