Some words sound like what they mean. And they could influence everything from fictional depictions of aliens to your first impression on a job application. 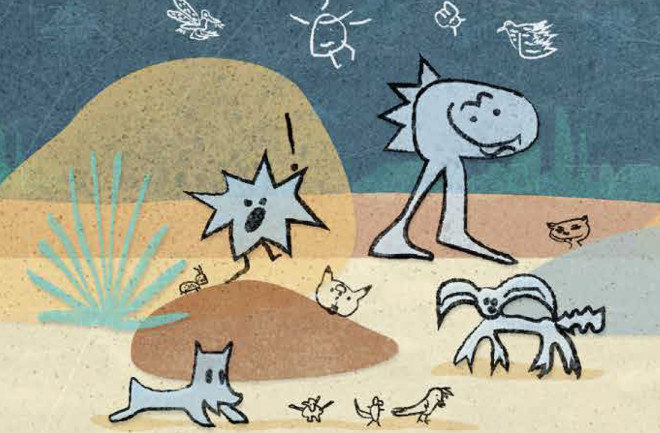 This article appeared in the June 2021 issue of Discover magazine as "What’s in a Name? More Than You Think." Subscribe for more stories like these.

I love the word discombobulated. That’s partly because I came to it late. Although the term dates back to at least the 19th century, I don’t recall ever hearing it before 2016. Just trying to utter it aloud perfectly encapsulates its meaning (confused and disconcerted). I usually get about halfway through, to the bob, then lose track of what I’m saying. I don’t think I have ever pronounced discombobulated the same precise way twice. And I always feel a slight sense of relief when I reach the ed without screwing it up, without showing my inner discombobulation.

Most words have no apparent connection to what they signify. As the linguist Steven Pinker puts it, we call a dog “dog” because everyone else does. And that’s how it has to be. It would overwhelm our senses if every word we spoke or heard came with deeper semantic meaning.

That rule applies to most words, but not all. The words pop and murmur sound like they, well, sound. Try to shout the word whisper. Weird, right?

Such onomatopoeic terms demonstrate what researchers call sound iconicity, or a resemblance between a word’s form and meaning. Pinker and others argue that iconicity is rare in language, but plenty of psychologists and linguists disagree. The debate has swung back and forth through the ages.

In the fourth century B.C., the Greek philosopher Plato wrote that certain words seemed particularly suitable to their meaning. Numerous words support his case. For example, if we assume that the made-up words mal and mil can both mean table, then which of the two do you think best describes a large table? You likely said mal — along with 75 to 96 percent of people in a classic study that discovered the effect in 1929.

It seems more natural to associate the names of large animals, for example, with low-pitched sounds: say, elephant, compared with mouse. One classic finding, tested across decades and cultures, shows that people overwhelmingly associate the made-up words bouba with a round shape and kiki with a sharp and angular one.

Unfamiliar and free of linguistic baggage, made-up words help scientists investigate iconicity. Drawing helps too. In trials and tests asking people to interpret the meaning of made-up words visually, researchers can free volunteers from the constraints of trying to squeeze these inferred meanings into words of their own.

In a unique 2019 study, psychologists combined the two ideas. A team tested how volunteers interpreted the meaning of nonsense words. They asked the volunteers to attribute characteristics to and draw pictures of imaginary creatures, such as a horgous, a keex, a bomburg and a cougzer.

The psychologists presented adjectives — round, spiky, large, small, masculine and feminine — that the volunteers had to match with 24 nonsense words. The scientists then picked the top 12 words that got the most consistent and unique descriptions. Most people rated an ackie and gricker as small, an ambous as round, an axittic and cruckwic as sharp and a heonia as feminine.

Another group of volunteers then drew pictures of animals inspired by these names. When a third group examined these drawings, and the possible names associated with them, they mostly made a match. Not every time, of course, but they did so more often than chance would predict.

It wasn’t a matter of drawing skills, Davis says. “Some of them were really outstanding. Really impressive artwork,” he says. “Others, less so.” He sent me the drawings and I can see what he means. I’m no artist, and clearly neither were some of these volunteers. Some attempts are best described as abstract, though to be fair it’s not an easy task.

“There are definitely differences in the degree to which people are able to represent these properties,” Davis adds. For instance, one drew a boodoma as a large-breasted creature. Another interpreted the same word to be a sad-looking ladybug. While the pictures can appear a little random, look at enough of them and certain patterns or themes seem to emerge. Most people drew a keex as smaller and spikier than a horgous, for example.

Beyond the quirky experiment, these findings have far-reaching implications for human interaction. Maybe you’re a soon-to-be parent choosing a baby name. If people expect a horgous to be big and a keex to be small, what does that mean for every Pam, Dick or Harry? Could our names influence the way people view and behave towards us?

Yes, says Penny Pexman, a psychologist at the University of Calgary in Canada. In a series of studies, she has shown we tend to expect people to have specific character traits based on how their name sounds. Just like the nonsense words, people associate the “round” sounds in people’s names with one set of characteristics, and names featuring “sharp” sounds with a very different set.

“They think that Anne tends to be conscientious and hardworking and sensitive,” Pexman says. “Kate is expected to be extroverted and less conscientious, less hardworking, less agreeable.”

I asked her about David — for purely journalistic reasons, of course. “David is closer to the round end,” she says. That would make me hardworking and sensitive. I was a little surprised; my wife, even more so. But who am I to argue with science?

Importantly, surveys suggest that the link exists only in the mind of the person making it. There is no evidence that the Kates of the world are more extroverted than the Annes. “You could construct a little bit of a farfetched scenario where people start to look like their names over time and maybe people’s personalities start to match their names through some sort of congruency. But, luckily, we did not find that,” Pexman says.

There’s also no evidence that people are basing their judgments on people they met previously — say, Kate, your former work colleague who was a bit of a slacker. “We don’t think it’s about particular exemplars,” adds Pexman.

Writers such as Charles Dickens knew the value of iconicity in character names to emphasize their personalities. Research shows even people unfamiliar with the story judge that Oliver Twist is likable and Fagin is not.

Pexman is now working on a study to see how people’s names could affect their chances of being chosen for a job after an interview. “We have videos of people being interviewed for jobs and we will manipulate the names of those candidates before others evaluate them,” she says.

“What’s in a name?” William Shakespeare asked us in Romeo and Juliet. “That which we call a rose by any other name would smell as sweet.” Well, perhaps not.

David Adam is a freelance journalist based near London. He writes about science, medicine and the mysteries of the human mind — including his own.