Words are a powerful tool for communicating an experience to others, but they can also alter your own perception of that experience entirely. 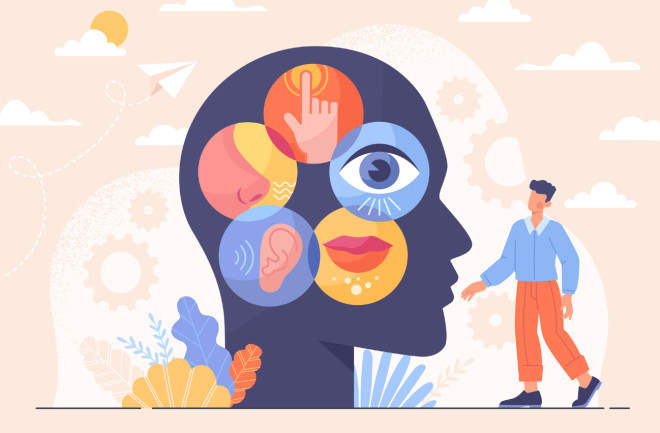 When going about our daily lives, most of us experience the world as being “real” — in other words, objects, people and events exist in an external world that we can interact with. Sure, sometimes when we dream, our minds create a reality that can seem as vivid as the “real” one. But upon waking, we find that the world has gone on without us.

Such insights into the nature of reality seem obvious. But the more scientists and philosophers delve into what is defined as real, the more they find that concrete answers are hard to come by. Are physical objects real? Is reality fundamentally immaterial? In what sense does the world exist outside of the mind?

While we can’t expect to find immediate answers to these questions, the human experience of what is real is undoubtedly shaped by the use of one of our most important evolutionary innovations: language.

Since its development roughly 50,000 to 150,000 years ago, language has enabled humans to link arbitrary symbols with information in the world and in our memories. Not only is language an efficient mechanism for communication with others, but through language, we’re able to conjure vivid mental representations of lived and imagined contexts and experiences.

Think back to a podcast you recently listened to, or a book you just read. Either way, it isn’t difficult to find examples of language that elicits strong emotional responses in us — even if such content is fictional.

And while language has the power to describe captivating worlds outside of our own, it also has the power to shape how we experience our everyday world. Over the past few decades, researchers have worked to uncover how the native language a person speaks determines how they divide up features of the external world … things like color, space, objects and events.

When committing an event to memory, for example, speakers of different languages may divide up that event differently depending on how they encode motion. English speakers tend to use verbs that describe motion in terms of its manner (e.g., skip, walk, run), but Greek speakers tend to refer to its path (e.g., approach, ascend, pass).

Despite its physiological basis, cross-linguistic studies have shown that color perception is also linked to language. A well-known example: Because Russian speakers divide blue into two color categories, lighter blue (goluboy) and darker blue (siniy), there is no single generic Russian word that encapsulates the various shades of the color. When tasked with mapping out the boundaries of different colors along a spectrum, therefore, English and Russian speakers tend to draw lines at different intervals because of the ways their languages divide up the color spectrum.

“Language is our way of encoding regularities in our environment,” says Eamon Walsh, a neuroscientist at King’s College in London. Because we encode our experiences of the world through language, it has the power to highlight or augment certain phenomena — while simultaneously de-emphasizing other phenomena.

Another example of linguistic cues shaping visual perception is found in the 1999 invisible gorilla experiment. In the experiment, participants watched a video in which two teams of people — one wearing white shirts and the other black shirts — pass a ball to one another. An instructor asked the video viewers to simply count how many times the white team completes a pass. Sounds easy enough, right?

Participants were not told, however, that halfway through the video, another person dressed as a gorilla would walk through the middle of the screen. And surprisingly, most viewers missed this out-of-place primate completely! Without the linguistic cue to keep a wary eye out, people can literally miss a gorilla staring them in the face.

Another interesting example comes from wine tasting. If you’ve ever done a tasting, it may have been difficult for you to relay the subtleties of flavor and aroma in the wine; however, once a trained wine taster gives you the language to describe different aspects of the wine, suddenly it is easier to identify those characteristics in your own mind. In this case, assigning words to perceptions of taste allows someone to experience them in a more refined way.

But why is language so tightly coupled to our experiences of the world? For a long time, scientists thought that language and the other general functions our brains carry out — such as controlling motor movements, analyzing sense perception and regulating the body's internal systems — were located in specialized regions of the brain. Language was originally thought to be processed in the left hemisphere.

Over time, however, we have come to realize these processes are non-localized and codependent. Think, for example, of the connection between language and action: Listening to certain words often activates corresponding motor systems, and there is growing evidence that language and motor networks actually share neural resources.

“Our picture of neural architecture is moving towards a model where general functions are more integrated than what was previously thought,” Walsh says. A 2016 study found that saying single words can activate several brain regions across both hemispheres, and that they tend to be grouped by meaning into rough categories (e.g., social words such as wife or family).

If language affects the same areas in the brain that are responsible for perception and action, it's unsurprising that words can also have a real effect on our experiences of the world.

The Future of Language

Certain linguistic techniques such as repetition and metaphor are also capable of altering our ongoing experiences. Direct verbal suggestion, in which phrases such as “your arm is getting heavier” are repeated to a person, can indeed induce perceptions of objects and sensory experiences.

Prior research has attempted to explain this phenomenon in terms of the hypnotic state such techniques can induce in people. However, some other researchers suggest the effects can be better understood in terms of the connection between language and perception.

More broadly, language has the capacity to create worlds as real as the one we inhabit. It can be targeted at external objects and events, or even our own bodies, to create and manipulate what we experience as real. How we decide to describe an event, after all, becomes inextricably tied to the event itself — and narratives can fuse with what senses or perspectives we choose to highlight or ignore.

Now, emerging information technologies like virtual and augmented reality, which similarly encode reality through language (programming language, that is), are offering us ways to create, edit and investigate new realities. Just as the invention of natural language redefined our relationship to reality, such technologies may shape what we understand and experience as real in the future.