How Humans Have a Time Machine in Our Heads

The ability to draw from your past and imagine a possible future is called mental time travel. And it might be only unique to humans. 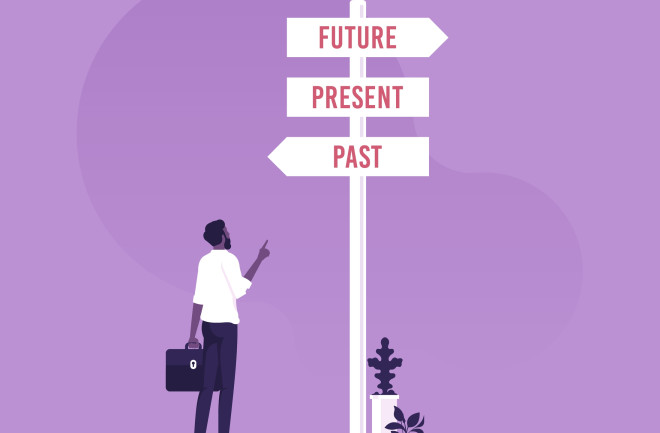 Have you ever found yourself in the shower the morning of a big event — say a job interview, a presentation or a tough conversation with a loved one — practicing what you’re going to say? You might set a stage in your mind, picturing the scene in myriad ways, rehearsing the situation — not unlike Nathan Fielder’s newest HBO show.

You might not realize it, but what you’re doing is actually mental time travel: drawing on your past to imagine a possible future and placing yourself there in your mind.

“We have something akin to a virtual time machine in our heads,” says Thomas Suddendorf, professor of psychology at the University of Queensland and co-author of The Invention of Tomorrow, a book on mental time travel published in 2022. “We can, in our mind’s eye, relive past events and project ourselves forward and imagine potential future situations.” Suddendorf and late collaborator Michael Corballis coined the term in a 1997 paper.

The backward-looking component of mental time travel is a form of episodic memory, which psychologist Endel Tulving first described in 1972. This type of memory enables us to not only remember information, but to relive specific experiences from our past.

For example, while you might know where and when you were born, you don’t actually “remember” it as a distinct experience; you can’t relive it in your head. The memory of receiving a Nintendo GameCube at your seventh birthday party, however, would be episodic. The forward-looking analog, then, is episodic foresight: mentally placing yourself into an imagined future.

Envisioning multiple possible futures isn’t present at birth, however. In a 2016 study, Suddendorf and Jonathan Redshaw used a deceptively simple experiment to test the development of foresight in children: a forked tube with two exits, but only one entrance. Children could see a desirable item, like a ball, go into the tube only one way, but must prepare for the possibility of it exiting the tube in two different ways. If the child successfully caught the ball as they exited the tube, they got a reward, such as a cool sticker.

“When you do this with a two-year-old, […] what they do is they cover one of two exits,” says Suddendorf. “Whereas a four-year-old immediately from the first round will cover both exits.”

This ability to make contingency plans, to accept that you can’t know the future for sure, is a product of childhood development. “It kicks in around three or four,” says Suddendorf.

While it has been apparent that humans possess cognitive abilities not seen in other animals, finding which brainy skills are unique has been tough to tease out. When it comes to mental time travel, an easy place to start is with our closest relative, the chimpanzee. A study used the same tubular tool for human children on chimps and they did not fare well.

“Like a two-year-old child, the chimpanzee seems to be able to predict that if you drop [a ball] at the top, it will come out the bottom,” says Suddendorf. “What they don’t seem to do is prepare for more than one possibility.”

Terminology used in the scientific literature can sometimes complicate studying mental time travel in animals. A 2019 paper uses the term “foresight” while referring to future-directed behavior for the cognition and behavior of insects.

Dragonflies that capture prey by intercepting them mid-air, angle themselves beforehand. They don’t face their prey in straight-on in the moment, but instead predict where it will be fractions of seconds in the future. But this foresight, while involving future-oriented behavior and planning, is not the same as the episodic foresight used in mental time travel.

“Because these words are also used in common parlance we have different associations with them,” says Suddendorf. “There are many different future-directed capacities […] if you want to call them foresight it’s totally fine, but they don’t need to entail the ability to imagine future situations.”

While there is a study showing evidence that New Caledonian crows may mentally time travel, or are at least prime candidates for more rigorous testing, Suddendorf remains skeptical that other species can mental time travel.

“Maybe crows have developed some capacity in that domain, [but] even here there are some other alternatives one could potentially raise,” he says. This doesn’t mean that the ability definitely doesn’t exist, in crows or any other animal, however. “We’ve got to be open that future studies will show more competence than we can currently conclude.”