From Mouth to Mind: How Language Governs Our Perceptions of Gender 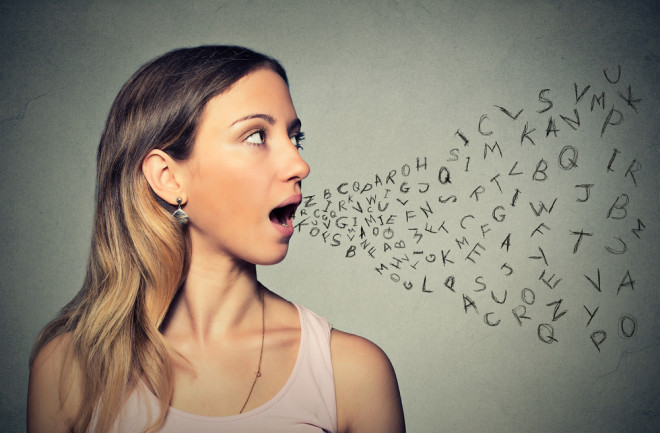 Take a second and try to talk about a person without mentioning gender.

If English is your native tongue, odds are you failed. But if you had been born in Indonesia, you might have succeeded.

Lera Boroditsky, who studies language and cognition at the University of California, San Diego, recalled a conversation with a colleague from the Southeast Asian country. He was asking her about someone she knew back in the states, and gender didn’t pop up until question 21.

“He didn’t seem to think it was that important,” she said.

In some cultures, maleness and femaleness aren’t the prominent traits they are in the U.S. In yet others, they’re even more salient.

How languages deal with gender can be divided into three classes: Some languages, like English, are natural gender languages. They are characterized by pronouns, and some nouns, denoting the gender of people and animals.

Others, like the Romance languages, are grammatically gendered. They place all nouns into gender categories, which don’t necessarily align with natural gender. Think “la casa” (feminine) and “el baño” (masculine). There is little consistency in the genders of words across languages, though. In some, including Spanish, the word for “manliness” is even feminine.

The third kind of language — which includes Indonesian, Finnish and Mandarin — is genderless. These still have words for man and woman, and for other words that designate gender, like “mother,” but they have no pronouns or linguistic signals for male and female, in living beings or objects.

The way we perceive gender seems to depend on the way it’s presented to us as we’re learning. And our language is a big part of that. A growing body of research suggests that the language we speak, including its gender features, shapes the way we think and act.

In one study, Boroditsky asked speakers of German and Spanish to describe a bridge. The word is feminine in the former language, masculine in the latter. German speakers used adjectives like beautiful, elegant and fragile, while Spanish speakers viewed bridges as towering, dangerous and strong.

Other study participants, when asked to speak like different days of the week, chose masculine or feminine voices in accordance with the gender of the words for those days.

To Boroditsky and many scientists, these experiments and others like them provide solid evidence for a connection between the language and cognition. If a person grows up noting gender at every word, those habits of speech eventually bind them to a perception of the world as a realm with distinct male and female entities, with strong stereotypes for each.

“I think we tend to really believe the structures in our language,” Boroditsky said. “We believe they really reflect reality.”

Over the centuries, some philosophers even praised their mother (why not father?) tongues for capturing the “true” genders of objects. But there’s no evidence for that. Monolingual speakers are prone to accept their language as the truth, Boroditsky said, but people who have been exposed to another language “no longer have that illusion.”

No feature of a language is necessarily permanent. For example, Old English was grammatically gendered until partway through the middle ages, when changes in the way people spoke eventually eroded the vocal distinctions between male and female.

Boroditsky said Indo-European — which gave rise to English and scores of other languages in Europe, the Middle East and India — is thought to have developed gender because words associated with things that were biologically male or female tended to have endings that lined up with their respective gender, and other words with those endings got lumped in with them. Seen in this light, the gendering or de-gendering of language is not so much a deliberate process as it is a gradual evolution of sounds. Often, speakers don’t even notice the subtle shifts in the inflection of their speech over time, Boroditsky said.

But more recently, some countries are seeing efforts to intentionally alter language. Sweden did away with its formal pronouns decades ago to de-emphasize class distinctions, and some people in France are pushing for gender-neutral language. As it stands, many nouns for professions in French have only a masculine form. Proponents of inclusive writing believe this puts women at a disadvantage, and they hope to either introduce feminine versions of professional nouns, or create a neutral pronoun.

Feminists have long argued that gendered language contributes to sexism, and some research supports this. One study found that speakers of Spanish and German, both gendered, expressed more sexist attitudes than English speakers.

Penelope Eckert, a professor of linguistics at Stanford University, said languages are largely a reflection of ideology.

For example, every time we use the masculine pronoun as all-encompassing (“if a person feels ill, he should call a doctor”), or mankind to mean all humans, it is a sign of our societal values and serves to reinforce them. Even phrases that include men and women (“good evening, ladies and gentlemen”) assume a binary gender system.

“You get those kinds of locutions all over the place,” Eckert said, “and they just sort of unconsciously affect the way we think about gender.”

Even the term “natural gender” in reference to languages like English is problematic, Eckert argues, because gender is a social construct rather than an inherent quality.

And the way we talk may affect more than our thoughts. Numerous studies have found higher gender inequality in countries with gendered languages, meaning our speech may indirectly impact the lives of women in just about every conceivable way.

That doesn’t mean that there aren’t benefits to sorting words by gender. It allows for more complexity in language, Boroditsky says, and more efficient mental processing. Because every noun fits into a category, and every verb and adjective that modifies it is marked accordingly, it’s easier to keep track of the relationships between words.

And though the practice of creating linguistic classifications is widespread, the idea that they must align with biological sex isn’t universal. Some languages divide their nouns into “animate” and “inanimate” categories, and others have more bizarre distinctions. One word group in the Australian Aboriginal language Dyirbal includes nouns for “women, fire and dangerous things.”

Distinguishing between genders in the way English does can also be helpful at certain points in a society’s development, Boroditsky said. If ideas of gender equality haven’t taken root, gendered language can keep women from becoming invisible.

“It brings people out of the shadows,” she said.

But as a culture develops, she added, gender is often an irrelevant detail that limits the scope of discussion. Whether a doctor is a man or a woman is not so important as whether they are a good doctor.

But the road to gender-neutral language is littered with obstacles. In languages like Spanish with gendered noun classes, the distinction is woven so deeply into the grammar that probably nothing but time could remove it. Even in the more modestly gendered English, grammarians have fought against modifications as slight as substituting “they” for “he” as the generic pronoun, even though the latter has been in popular use for hundreds of years.

The French Academy, the authority on language in France, has gone so far as to condemn gender-neutral language, calling it an “aberration.” The institution argues inclusive writing, and the confusion it would breed, poses a “deadly danger” to the language.

“People have to want to do it,” Boroditsky said. “In the end, language is a tool people change to fit their needs.”

Eckert agrees, saying: “it’s not going to happen magically overnight.” And no one thinks a pronoun shift would eradicate sexism altogether. But as we come to realize the impact of language on the mind, Boroditsky argues that eliminating the routine separation of genders in our speech could help to mute the differences we perceive in them.

“Maybe it’s time to be able to imagine a human without categorizing them by gender,” she said, “and see them as more of an individual.”