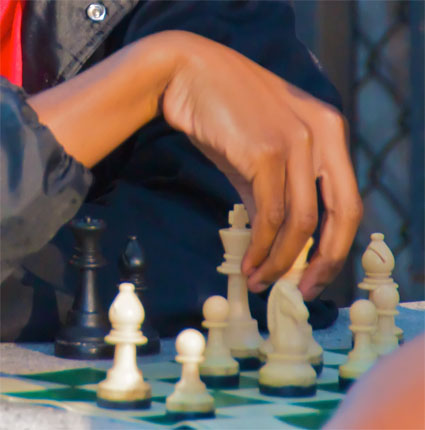 Getting better at chess, it turns out, isn't merely a matter of thinking harder, or using one specific area of the brain---it has more to do with the neural links between brain regions. Neuroscientists from Japan studied the brainy blood-flows of both professional and amateur shogi players (a chess-like game from Japan) and found that professionals have certain brain circuits that may allow them to put on their intuitive thinking caps. The study, published in Science, used functional magnetic resonance imaging (fMRI) to examine which brain areas showed the most blood flow as professional and amateur shogi players tested their mettle during a match. The experts showed more activity in two regions: the precuneus region in the parietal lobe, which is involved in pattern recognition, and the caudate nucleus, an area in the basal ganglia that is involved in learning, memory, and cognition.

The research team found that the precuneus-caudate connection showed up consistently when professionals were asked to come up with a rapid-fire choice of moves, but not as much for the amateurs. "These results suggest that the precuneus-caudate circuit implements the automatic, yet complicated, processes of board-pattern perception and next-move generation in board game experts," the researchers reported. [MSNBC]

Keiji Tanaka, one of the researchers at the RIKEN Brain Science Institute's Cognitive Brain Mapping Laboratory in Wako, Japan, says that the caudate nucleus is associated with bodily movements, but also with intuitive thinking, and the hope is that science will find ways to allow humans to forge better precuneus-caudate circuits. As it stands, it takes years of practice for professionals to harness the powers of gaming intuition.

"Professionals are trained extensively for a long time, over 10 years, hours every day. This extensive training (may have) shifted the activity from the cerebral cortex to the caudate nucleus," the study's lead author Tanaka said.... "The caudate nucleus is very well developed in rats and mice, while the cerebral cortex is very developed in primates ... by becoming expert, shogi masters start to use all parts of the brain," Tanaka said. [Reuters]

These findings have far greater implications than for just shogi and chess players, according to Paul Sanberg, director of the University of South Florida Center of Excellence for Aging and Brain Repair in Tampa.

"If you look at the areas of the brains that showed specific activity in the professional game players, these are the same regions that are involved in certain diseases, such as Parkinson's," he noted.... "Anything that adds to our understanding about what these parts of the brain can do is important, and the hope is that we may be able to develop potential treatments to increase the activity in these areas if they're injured" [HealthDay News]

In addition to the potential relevance for disease research, Tanaka also hopes that this research will eventually prove useful for all intuition-using professionals.

"Auditors, crime investigators, doctors all need (intuition) to find the point of concern, the point of abnormality," he said.... "Systems engineers often have to depend on intuition to locate the source of trouble. Excellent engineers can't explain why they are good, it's very similar to chess." [Reuters]