Ever Enter a Room & Forget Why You Went There? Blame The Doorway. 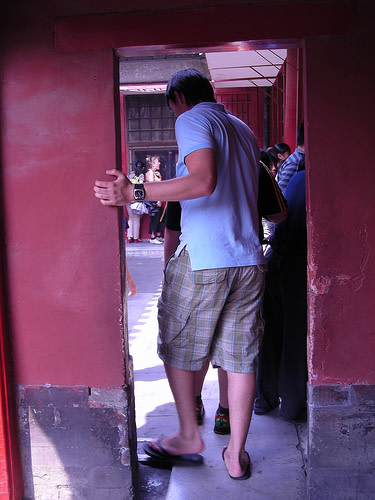 New research suggests the mere act of walking through a doorway helps people forget, which could explain many millions of confusing moments that happen each day around the world. A study published recently in The Quarterly Journal of Experimental Psychology found that participants who walked through doorways in a virtual reality environment were significantly more likely to forget memories formed in another room, compared with those who traveled the same distance but crossed no thresholds. Notre Dame University researcher Gabriel Radvansky says doorways serve as a type of "event boundary" that the brain uses to separate and store memories. When you enter a new room, your brain updates its understanding of what's going on in the new environment, which takes some mental effort. This parsing of memory, albeit subtle, leaves the information encoded in the other room (i.e. "Now I'm going to my room to fetch some knickers") less available in your new location. Recognizing this tendency could help you avoid future lapses. Or you could take Radvansky's advice, as (jokingly---I think) told to Postmedia News: "Doorways are bad. Avoid them at all costs." Reference: Gabriel A. Radvansky, Sabine A. Krawietz & Andrea K. Tamplin. Walking through doorways causes forgetting: Further explorations. The Quarterly Journal of Experimental Psychology. Volume 64, Issue 8, August 2011, pages 1632-1645. DOI: 10.1080/17470218.2011.571267