Emotional Distractions Can Be a Double-Edged Sword

Grabbing your phone in a moment of loneliness isn't always a bad thing. But if you’re seeking long-term solutions, learning to process negative feelings is best. 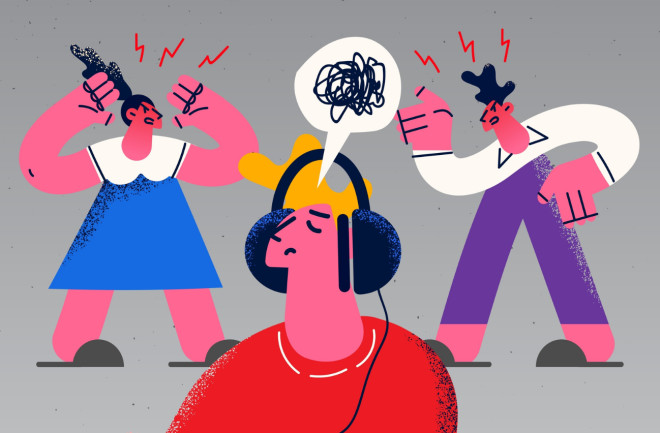 We are masters of distraction, and our society makes it easier than ever. Nearly half of Americans spend at least five hours on their phone each day, according to a survey conducted last February, and the average American spends about 3 hours each day watching television.

Read More: Video Game Addiction Is on the Rise. Here’s What It Looks Like

Anytime we feel an uncomfortable emotion surfacing, we often do what we can to make ourselves feel better in the moment — whether that means scrolling through Instagram, watching videos on TikTok, online shopping or binge watching a favorite television show. It doesn’t matter if a person is bored, lonely, angry or sad; they reach for their phone.

But does distraction really help deal with emotions? Or does it merely exacerbate the problem? According to experts, the answer is a mixed bag. Sure, in some ways it can help, but oftentimes distraction avoids the root of the problem.

What Are Emotions Anyway?

Before discussing emotional distraction, says Carolyn MacCann, an associate professor at the University of Sydney who studies emotional intelligence and regulation, let’s first understand the definition of an emotion.

Researchers largely agree that emotions evolved from survival instincts. First, our brains notice and evaluate a situation and decide its personal relevance through a process called appraisal. Then, the emotion in question causes physiological changes and often evokes action. For example, if you’re sad, you retreat. If you’re angry, you approach. At the same time, the onset of an emotion makes us feel a certain way.

But often, in the loud world in which we live nowadays, avoiding an emotion is easier than processing it. And this, says MacCann, isn’t always a bad thing. During the sequencing of an emotion, distraction is what psychologists call an “attention deployment strategy” that occurs when we first notice an emotion. “There’s pretty good evidence that distraction can help regulate emotions,” MacCann says. “Distraction can help down regulate the anxiety around a negative emotion.”

It works because we avert our attention early in the onset of an emotion, so we’re less likely to have felt any negative feelings or physiological changes around it. Additionally, she says, if you have a clinical condition such as PTSD that makes facing strong negative emotions unsafe without professional support, then distraction is your best bet in the moment — until you have the tools and therapy to deal with your own triggers.

According to MacCann, distraction occurs earlier in the trajectory of an emotion than numbing yourself, and therefore is a more effective tool for regulation. Numbing — for example, via emotional eating or by turning to alcohol and drugs — takes place after the emotion has happened and you’re dealing with the repercussions.

Once an emotion sets in, it’s already changing the way you feel. Someone may reach for various outside substances, from doughnuts to drugs, to temporarily soften the pangs of sadness or cloud their shame, but once the brain’s reward system recovers, that person is back where they started and often worse off.

But distraction isn’t a true fix either, says MacCann, because it only works in the short-term. Getting to the root of your issues is the only way to keep them from coming up again. Luckily, learning to sit with an emotion can help and it doesn’t take as long as you might think.

While there are longer mood states that last days or months, most emotions only last a few minutes before they pass, according to MacCann. That’s why, if you’re seeking long-term solutions, learning to process emotions is the only way. And research has shown that accepting negative emotions is good for your mental health.

Hilary Jacobs Hendel, a psychotherapist and author of It’s Not Always Depression, agrees. “Often times, when we feel anxiety, it’s because we have emotions like fear, anger and sadness, that’s we’re trying to push down,” she says. “Maybe you were taught when you were young that certain emotions were not OK or maybe your emotions feel overwhelming. Whatever the reason, it’s about learning to tolerate them in a safe way.”

Jacobs Hendel uses a process called the “change triangle,” which involves connecting your feet to the floor, deep belly breathing, slowing down and then identifying where different emotions are felt in the body. “We feel like emotions are going to get bigger when we focus on them, but in reality, the opposite is true,” she says.

When you have too many emotions, she says, it can cause anxiety. But when you slow down and make space for your emotions, you can start to process them. And feeling them in the body is a good place to start — once anxiety goes down, you can identify the other emotions that are coming up in your body.

Grabbing your phone in a moment of weakness isn't necessarily a bad thing in the short-term. But if the same emotions keep coming up and causing you stress, learning to sit with them and work through them is the only way to move past trauma in the long-term, says Jacobs Hendel. Whether you feel like you’re reaching the ends of the internet or you just want to be present for the life you’re living, both MacCann and Jacobs Hendel agree that (regardless of the decision to seek professional help) facing your emotions may help you see that they aren’t quite as scary as you initially thought.

More From Discover
Mind
Can't Resist a Black Friday Deal? Here's Why
Mind
What Is Dissociative Identity Disorder?
Health
What You Can Do About Seasonal Depression
The Sciences
3 Historic Hoaxes That Duped The Masses, Scientists Or Media
Mind
4 Things You Should Know About Cognitive Dissonance
Mind
Why Do We Get Our Best Ideas In The Shower?
Recommendations From Our Store
My Science ShopDiscover STEM Kits
My Science ShopDiscover 2022 Calendar
My Science ShopStrange Science
My Science ShopElements Flashcards
Shop Now
Stay Curious
Join
Our List