Don't Call a 9-Year-Old a "Psychopath"

Emily Willingham (Twitter, Google+, blog) is a science writer and compulsive biologist whose work has appeared at

Slate, Grist, Scientific American Guest Blog, and Double X Science, among others. She is science editor at the Thinking Person's Guide to Autism and author of The Complete Idiot's Guide to College Biology. 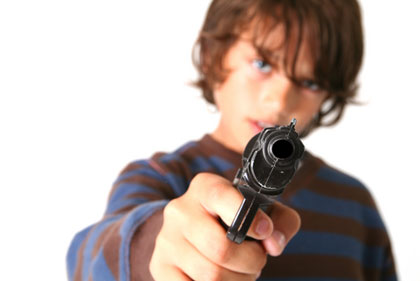 In May, the New York Times Magazine published a piece by Jennifer Kahn entitled, "Can you call a 9-year-old a psychopath

?" The online version generated a great deal of discussion, including 631 comments and a column from Amanda Marcotte at Slate

comparing psychopathy and autism. Marcotte's point seemed to be that if we accept autism as another variant of human neurology rather than as a moral failing, should we not also apply that perspective to the neurobiological condition we call "psychopathy"? Some autistic people to umbrage at the association with psychopathy, a touchy comparison in the autism community in particular

. Who would want to be compared to a psychopath, especially if you've been the target of one? In her Times piece, Kahn noted that although no tests exist to diagnose psychopathy in children, many in the mental health professions "believe that psychopathy, like autism, is a distinct neurological condition (that) can be identified in children as young as 5." Marcotte likely saw this juxtaposition with autism and based her Slate commentary on the comparison. But a better way to make this point (and to avoid a minefield), I'd argue, is to stop mentioning autism at all and to say that any person's neurological make-up isn't a matter of morality but of biology. If we argue for acceptance of you and your brain, regardless how it works, we should argue for acceptance of people who are psychopaths. They are no more to blame for how they developed than people with other disabilities. If being compared with a psychopath elicits a whiplash-inducing mental recoil, then you probably have a good understanding of why the autism community responded to Marcotte's piece (and accompanying tweets) so defensively, even though her point was a good one. At its core, the argument is a logical, even humanistic one. When it comes to psychopathy, our cultural tendencies are to graft moral judgment onto people who exhibit symptoms of psychopathy, a condition once designated as "moral insanity." We tend collectively to view the psychopath as a cold-hearted, amoral entity walking around in a human's body, a literal embodiment of evil. But those grown people whom we think of as being psychopaths were once children. What were our most infamous psychopaths like when they were very young? Was there ever a time when human intervention could have deflected the trajectory they took, turned the path away from the horror, devastation, and tragedy they caused, one that not all psychopaths ultimately follow? Can we look to childhood as a place to identify the traits of psychopathy and, once known, apply early intervention? Clinicians and therapists have expended a great deal of energy discussing the notion of psychopathy and trying to pin it down and predict its course. Some portion of what we think of as psychopathy is genetic

---yes, you can inherit tendencies

---but another portion of it arises from variable environmental factors

. The current version of the Diagnostic and Statistical Manual of Mental Disorders (DSM), IV-TR, offers up six diagnoses related to antisocial behaviors in childhood, and none of them are especially predictive of who will become an adult psychopath. Indeed, most children who show what clinicians consider behaviors associated with psychopathy do not grow up to be psychopaths. While there's no perfect test of or predictor for psychopathy, the factors that can contribute to the condition may be a useful place to start, as described by forensic psychologist Katherine Ramsland in the article "The Childhood Psychopath: Bad Seed or Bad Parents

?" Among these signs of dangerousness

are a mother who shows a tendency toward isolation, a transient father, low frustration tolerance, a sense of omnipotence, cruelty toward others, and low birthweight or birth complications. The thing is, many of these features are known risk factors for other chronic problems—that is, they're more general issues that could be addressed through psychological intervention, whether the child will later become a psychopath or not. So what if, instead of using the "psychopath" label, we talked neutrally of less damning problems that need mitigation? We all have them. Some of us are fortunate enough to have shortfalls that are seen as foibles, earning chuckles from friends, family in-jokes, or visits to a therapist. Others of us get handed deeper troubles that are much more difficult to manage. Does that make us inherently "good" or "bad"? Biology doesn't do "good" or "bad," so let's just dispense with this kind of judgment. Accepting psychopathy as a brain condition, especially in children, could have positive results—as long as we dispense with the loaded word "psychopath." The rationale is clear: The term crushes with a moral weight and accusatory tone. As the headline of Ramsland's article and other articles

, we still have a strong tendency to moralize psychopathy, even if we're writing about it as a neurobiological problem. A child who is a "bad" seed is one of Damien's army

or the boys from Brazil

, a devil in child form, bent on evil, hopeless of remediation. And the parent of a psychopath is, obviously, a parent who has made a moral and parenting error, one so deep that their offspring is hopelessly lost to the dark side. If we reduce the stigma of psychopathy, particularly as it relates to children, it would be it easier to identify children at risk and make more effective therapies available to them. Right now, research into and application of such therapies can be difficult given the social and moral burden that the terminology implies. Would you enter your child into a study needing "psychopaths" as participants? Wouldn't you rather see a child labeled with "low frustration tolerance" or "low birthweight" than "shows early psychopathic tendencies"? In addition to being kinder and less stigmatizing, the former also provide for a tighter, more distinct target for intervention. Labels like autism can have benefits

: They can be a shibboleth among communities who relate to them, and under current constructs, serve as a passport to services. Rather than relying on stigmatized and shape-shifting labels for diseases, though, we'd often be better off looking to specific behavioral issues instead. That way we can help a child regardless of her neurobiological destiny. Does it seem far-fetched that treatments like this would work? At least some experts

have argued that personality traits are open to change during childhood and adolescence, observing that intervention may be "particularly effective" if targeted to the appropriate developmental periods and transitions. Skeem and colleagues note that early adolescence is an especially key period for emotional learning and intervention. For children who show what are now being designated as callous-unemotional traits

, intervention at these crucial periods could derail a child at risk of psychopathy from growing into a unemotional killer or narcissistic grifter. But, you might argue, one of the most infamous manifestations of psychopathy is harm to others, particularly bodily harm or even death, although not all serial killers are psychopaths and not all psychopaths kill. Do we just sit back and accept these acts without moral judgment because "psychopathy" is a neurobiological construct and thus an excuse? No. We do not. It's one thing to have a particular inclination because of one's genes or experiences during childhood and adolescence. It's another thing entirely to break the law or harm and kill other human beings. You can accept that psychopathy can be partly inborn without using that acceptance to defend immoral behavior or abrogate human and social responsibility or safety. As Jennifer Skeem and colleagues observed in remarking the potential legal ramifications of associating reduced amygdala activity and psychopathy

, "If a defendant manifests reduced amygdala activity while viewing aversive photographs in an fMRI scanner, this does not explain why he murdered his spouse 2 years ago." The neurology itself is neither bad nor good, morally speaking, but harmful behaviors are obviously wrong, and society requires protection from them. David Thoreson Lykken in the 1990s observed that the "hero and the psychopath are twigs on the same genetic branch

," remarking on shared traits of a seemingly fearless temperament. Like "heroes," psychopaths may also be pretty good at strategic thinking, although their version of it can be marked by an absence of conscience, emotional empathy, or altruistic inclinations. What benefit could society accrue by ameliorating callous-unemotional traits or building emotional empathy while not wiping out potentially heroic fearlessness or a capacity to excel at strategic thinking? Would it make the difference, as the mother in Kahn's Times article wryly remarked

, between a child's growing up to be a Nobel prize winner or a serial killer? Regardless of what we target in children who are at risk of "dangerousness" or being "callous-unemotional," let's just not call them psychopaths while we're doing it

. I'm in agreement with Marcotte and others that we should accept that it's not a moral failing any more than any other neurobiological make-up. But given the extreme unlikelihood that the world will ever perceive benefits of psychopathy--even if some of its traits could potentially be beneficial--it's one label we need to dispense with entirely, even as we accept its neurobiological basis.