Does the Templeton Foundation Support Science or Science Fiction?

Templeton grants fund important research — but they also go to projects on extraterrestrial power, faith healings and the afterlife. 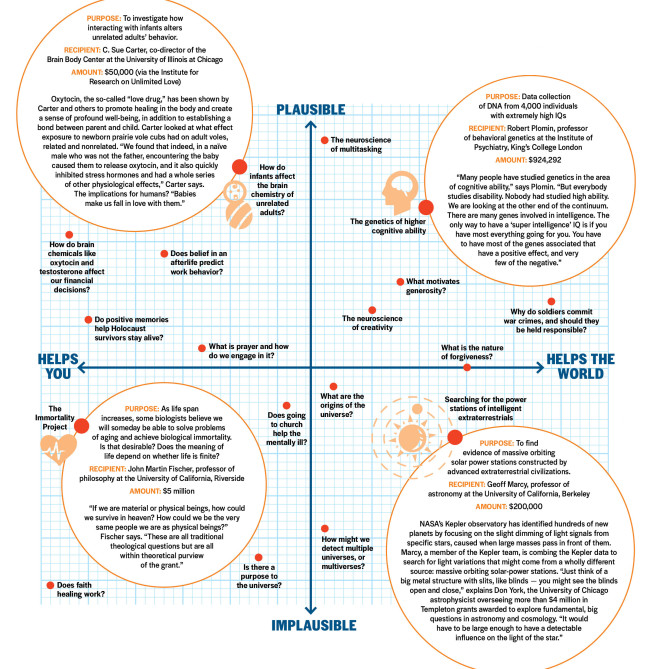 John Templeton, once called “arguably the greatest global stock-picker” of the 20th century, may now best be known for the foundation that bears his name. The Templeton Foundation often funds research into questions that seem a far cry from the grounded, data-driven realms of high finance: immortality, the nature of evil, the power of prayer and the possibility of alien life, to name just a few.

Templeton, a devout Presbyterian, established the foundation in 1987 to serve as a “philanthropic catalyst for discoveries relating to the Big Questions of human purpose and ultimate reality,” according to its mission statement. Although financing such research may raise scientific eyebrows and hackles, there’s no question that much of Templeton’s money — $71 million in 2011 — has funded legitimate and important science.

With an endowment of $2.5 billion in 2012, the foundation’s research efforts have expanded in recent years to cast a wide net. In 2012, the Templeton Foundation awarded 178 grants, averaging $970,446 each. Below is our deliberately oversimplified guide to these unusual and myriad efforts.

[This article originally appeared in print as "Sci-Fi Money."]