There’s no guaranteed way to avoid dementia. But scientists are finding that a healthy heart makes for a healthy brain, based on a growing body of research. 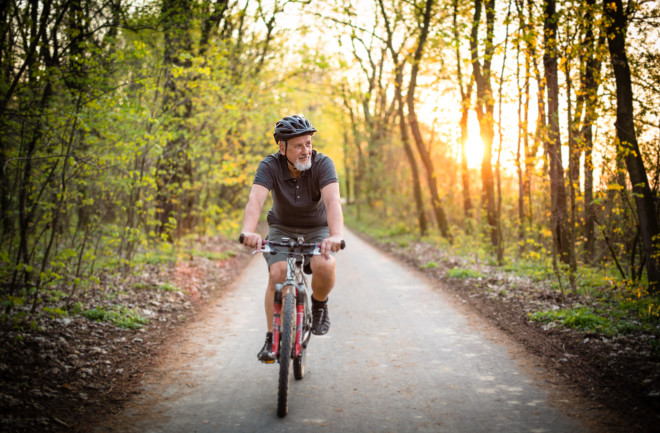 Few things are as unconditionally healthy as exercise. Besides the instant gratifications of losing weight, building muscle and simply feeling great, it protects against a host of deadly afflictions, especially as we age. Most of the obvious ones are physical — heart disease, diabetes, cancer. But it also staves off the various mental ails we call dementia.

Studies suggest that exercise is one of the best ways to prevent cognitive decline in our golden years. The data consistently show that people who are more active are more likely to retain their memory and thinking skills. That goes for physical activity of any kind, it seems, but aerobic exercise — anything that raises your heart rate — appears to be best.

Precisely what it is about engaging the body that enhances the mind is unclear, but there are a few theories. Exercise is accompanied by a boost in the protein BDNF, or brain-derived neurotrophic factor, which is thought to promote the formation of new neurons and minimize the loss of existing ones — especially in the hippocampus, one of the brain’s main memory centers. Also, as the heart pumps faster and blood flow increases, more oxygen makes its way to the brain, where it serves many vital functions.

In short, says Heather Snyder, vice president of medical and scientific relations at the Alzheimer’s Association, “What’s good for your heart is good for your brain.”

Alzheimer’s, by the way, is a specific disease, whereas dementia is a catch-all term for mental impairment. The former is the most common cause of dementia, though, and it’s a growing epidemic, afflicting some 6 million Americans. The risk of Alzheimer’s rises consistently after the age of 65, with a third of people in their late 80s and older suffering from it.

Nevertheless, Snyder says, “It is absolutely not a normal part of aging.” Alzheimer’s and other forms of dementia are closely tied to a long list of lifestyle factors, from stress to diet to smoking, and they can often be prevented by attending to these needs. Based on the existing data, exercise seems the most promising of these interventions.

Meta-analyses of the various trials that have investigated its potential benefits find that the risk of dementia drops with midlife exercise. Some studies have even concluded that as little as six to 12 months of exercise can win back some brain power for people who already have dementia, or the less oppressive “mild cognitive impairment” that precedes it.

Despite the growing evidence, researchers have much to learn about how physical activity influences the progression of memory loss. Plus, Snyder says, they’d like “to get a better sense of what’s the dose that you need.” Most work thus far has studied only small groups of people, she says, but a handful of large-scale trials are underway.

The EXERT trial is seeking participants across the country with mild cognitive impairment, while the IGNITE trial needs “cognitively normal” older adults. Some will be randomly assigned to walking 30 or 45 minutes a day, the others to daily stretching. The Alzheimer’s Association, meanwhile, is looking at the effect of lifestyle on brain health more broadly. The U.S. POINTER study aims to determine whether lifestyle changes “that simultaneously target many risk factors” can preserve cognitive function.

All these attempts to advance dementia research need diverse participants, Snyder notes, to ensure they represent all communities. She encourages anyone interested to make use of the Association’s “TrialMatch” tool to get connected with the right studies.

Living for Your Mind

Exercise isn’t something you do in isolation, of course. The best results come from combining it with a nutritious diet, adequate sleep, social involvement, and hobbies that keep you mentally alert, like reading or solving crossword puzzles. In a 2017 review of research regarding exercise and Alzheimer’s disease, the authors write, “Physical activity is one component of a healthy lifestyle.” By itself, it likely isn’t enough. They also suggest that physical activity with social and cognitive stimulation is most effective.

Even following all the healthy-mind strategies, there’s no surefire way to avoid dementia. These diseases are complex, capable of striking down even the most devoted life-long runner. But of all the lifestyle choices reputed to help us hold on to our intellectual abilities, exercise achieves the most consistent success.

How to take your cognitive future into your own hands, then? It’s difficult to give precise instructions for the ideal cognition-saving fitness regimen. “I think we all want to know how much, how frequently, and what do I have to do,” Snyder says. “But we don’t have the magic recipe.” That said, most physical activity seems to improve the brain, and she recommends that everyone “find something you love and something you’re going to stick to.” For her, it’s bicycling.

And if you haven’t been active continuously since your twenties, don’t fret. It seems you can acquire the habit quite far along in life and still reap the rewards. “The data suggest that it’s never too late to start,” Snyder says. “There’s always a benefit.”

More From Discover
Health
Why Walking Might Be One of the Best Exercises For Health
Health
Why Do Some People Live So Long?
Health
Combat Cognitive Decline With These 5 Activities
Technology
Life After Death? Cryonicists Try To Defy Mortality By Freezing Bodies
The Sciences
Inside The Brains Of Aging Dogs
Health
New Study Finds Men May Outlive Women Instead
Recommendations From Our Store
My Science ShopDiscover STEM Kits
My Science ShopDiscover 2022 Calendar
My Science ShopStrange Science
My Science ShopElements Flashcards
Shop Now
Stay Curious
Join
Our List