Do You Speak Brain? Try Studying These Neurons-on-a-Chip 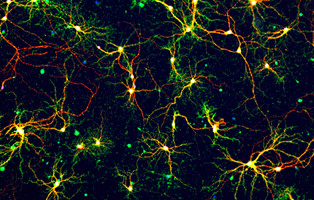 The neurons of a patient suffering from Alzheimer's.

You may not be consciously aware of it, but at any given time your brain is playing host to billions of simultaneous conversations (and no, I'm not talking about those voices). I speak, of course, of the conversations between your neurons—the incessant neural jabbering that makes it possible for you to move your limbs, learn, remember, and feel pain. Every time we experience a new sensation or form a memory, millions of electrical and chemical signals are propagated across dense networks of axons and jump from one synapse to the next, building new neuronal connections or strengthening existing ones. And they are constantly changing—forming and reforming associations with other neurons in response to how the brain perceives and processes new bits of information. Despite being central to our understanding of how the brain functions, these neural chats remain largely a mystery to scientists. What exactly are the individual neurons "saying" to each other? And how do these electrical and chemical "messages" become translated into actions, memories, or a range of other complex behaviors? To help decipher these discussions, a team of researchers from the University of Calgary led by bioengineer Naweed Syed

. The idea is to get the brain cells to "talk" to the millimeter-square chip—and then have the chip talk to the scientists through a computer interface. Syed's team demonstrated that it was possible to fuse neuronal networks to a microchip in 2004

when they created the original "brain on a chip," the first bionic hybrid technology of its kind. The neurochip stimulates the cells and the resulting chatter—the activity of the neurons at the level of the ion channels and synaptic ends—can be recorded with a computer. At the time, Syed and his colleagues used the chips to eavesdrop on snail neurons, which are large (4 to 10 times larger than human neurons) and thus easier to cultivate than other animal brain cells. The new version also relies on snail cells but is automated—a major improvement which means that just about anybody can now learn how to properly grow the cells on them. Furthermore, they offer a much higher degree of resolution and are more accurate. Whereas the first neurochips only enabled scientists to monitor the chatter between two brain cells, the new and improved models now allow them to listen in on entire networks and pick up on all the minute neural exchanges. Aside from giving researchers unprecedented access to the brain's innermost workings, the hope is that this technology will pave the way for new drugs to treat neurodegenerative disorders like Parkinson's and advanced prostheses that better mimic normal human motion by communicating directly with the brain. Over the coming months, Syed and his team plan on cultivating the neurons of a group of epileptic patients on their chips in order to study the cells' dysfunctional activity. People who suffer from epilepsy are wracked by frequent seizures which are brought on by unusual and excessive neuronal chatter. By honing in on the defective ion channels that trigger these abnormal signals, Syed believes that his chips will yield crucial insights into the disease and lead to a more effective treatment. If proven successful, the same model could be applied to other brain disorders, eventually eliminating the need to test drugs directly on patients—or at least providing a good pilot study before moving on to patients—and thus greatly accelerating the pace of research and development. It's the same principle as the lung-on-a-chip

, which scientists hope will lead to new drug-testing protocols that obviate the need for animal subjects. It's certainly not hard to see the appeal of these technologies. Everyone can get behind the idea of faster drug-development cycles and more finely tuned treatments, especially if it means that no humans or animals will be harmed in the process. In several years, after they become more sophisticated and ubiquitous, these neurochips could give a big boost to the fight against brain disorders, which are some of the trickiest puzzles in medicine.