Dancing ’Till Death: The Mystery Behind Dancing Manias

Masses of people tumbled through the streets of Strasbourg in 1518, dancing toward their doom. Scholars still struggle to understand why. 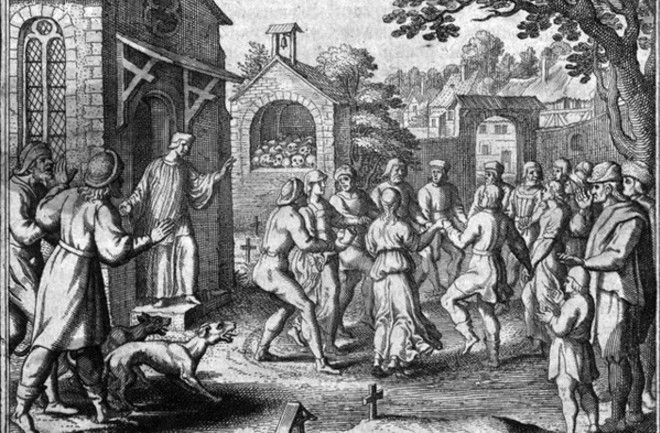 In 1518, several individuals started to dance through the streets of the city of Strasbourg (which is now located in France). This was no parade: They’d contracted a strange and seemingly contagious compulsion to do so, and within weeks, swarms of residents were whirling through town. The dance dragged on, and soon, dancers started to drop dead. One account approximated that as many as 15 people died daily during the dance’s peak, according to an article published in The Lancet.

Though this story sounds absurd today, the witnesses to these occurrences were already well acquainted with this dangerous dance. Indeed, several similar “dancing manias” and “dancing plagues” transpired in continental Europe throughout the medieval period, ensuring that these events were well within the era’s realm of possibility.

So, why did so many people stumble and sway without the ability to stop?

The troubles in Strasbourg supposedly started in July 1518, when a woman thrashed through the streets over multiple days in the sweltering summer temperatures. She danced and danced without stopping, says Anderson University historian Lynneth Miller Renberg. As the woman writhed, the compulsion started to spread. Within a week, 20 to 30 individuals waltzed wildly through town, and within about a month, approximately 400 were caught in a continuous and uncontrollable dancing daze.

“They are pretty spectacular,” Renberg says, who analyzed these odd circumstances and their cultural context in a Dance Research article published in 2017. The chaos in the streets immediately prompted public officials to consult physicians to learn the contagion’s causes and treatments.

In accordance with the then-popular humoural theory, they determined that the dancers had “hot blood” trapped in their bodies that forced them to move involuntarily. To remedy the issue, Renberg says, doctors advised that the dancers continue to twist and turn, all in an attempt to burn the bad blood away.

“The medical theory doesn't make sense at all today, but it incorporated cutting-edge theories about the body,” Renberg says. “This was an interesting moment in which we see several medical theories converging to try to explain something that seemed, even to them, inexplicable.”

To maintain their constant motion, the authorities moved victims toward the most spacious public places in town, including the guilds and the grain market, and sent musicians, minstrels and other dancers to accompany them. “They thought that this would help burn off the bad blood,” Renberg says. But the compulsion continued to spread, capturing more and more victims, many of whom were stuck swaying until they ultimately collapsed from fatigue or died.

City officials determined then that only direct divine intervention could cause such a serious situation. They believed that St. Vitus, a Christian saint associated with dancing curses, caused these troubles. Ultimately, they prohibited all public dancing, collected the victims, and carted them to the closest shrine to St. Vitus. There, they prayed and performed several rituals shrouded in mystery, and ultimately, the deadly dance subsided sometime in September.

Those who witnessed the event widely accepted that supernatural agents, such as saints, angels and demons, could cause dancing curses. “People living back then had absolutely no doubt in their minds that God and Satan were active in their daily lives,” says medical historian John Waller, author of A Time to Dance, A Time to Die: The Extraordinary Story of the Dancing Plague of 1518. “People in this region absolutely believed in St. Vitus’s ability to issue this kind of curse.”

Though countless individuals believe in similar spirits and curses today, some scholars aren’t satisfied with this reasoning and struggle to explain the occurrence.

Several distinct theories swirl around the disaster. For example, some scholars suggest that the people of Strasbourg contracted ergotism — a condition that can cause hallucinations, twitches, tremors, convulsions and incredible pain — from a fungus in their food. It’s possible that the fungus behind ergotism is involved in several other historical hysterias, including the Salem Witch Trials, though this Strasbourg theory has lost much of its credibility.

“That theory is one of the few which is absolutely untenable,” Waller says. “You simply can’t dance if you're suffering from ergotism.” That hypothesis also struggles to explain, according to Waller, why every dancer developed the same symptoms.

Today, a much more popular premise is that the people of Strasbourg suffered from mass psychogenic illness, a condition involving strange conduct that spreads among a given population in response to stress. “When you have the right beliefs and the high levels of despair and fear, then the dancing plague becomes possible,” says Waller, whose work has popularized this theory.

In 1518, the people of Strasbourg experienced some serious stress. Consecutive crop failures, famines, floods and bursts of bubonic plague and syphilis caused sickness and starvation, according to both Renberg and Waller. Alongside some strange astronomical activity, these woes seemed to indicate an impending apocalypse. To make matters worse, peasant rebellions ravaged the area, and the rumblings of a coming religious reformation promoted pervasive anxiety and alarm.

“Things are spiraling out of control,” Waller says. “All of these factors, but particularly the harvest failures, are converging to mean that these people living in the region of Strasbourg are under unimaginable psychological strain by 1518.”

Yet, according to the mass psychogenic illness theory, trauma alone didn't compel those in Strasbourg to flail through town. In fact, this theory posits that the townspeople’s stress and their palpable fear of curses combined to convince several individuals that they faced St. Vitus’s contagion. They compulsively started to dance, Waller says, and soon, spectators began swaying as well. “If there is a pre-existing belief in the possibility of possession and curse,” he says, “then you are much more likely to slip into a trance state.”

This theory focuses particular attention on the dancers’ shared symptoms and addresses why the mania spread so thoroughly throughout Strasbourg. According to Waller, the officials' initial responses only intensified the mass psychogenic illness. “The fact that the city authorities have people dance in the most public places in the city was an absolute disaster,” Waller says. “It ensured that anybody walking by who felt burdened by sin was far, far more likely to succumb to the dance.”

Though the context and the cause behind these dancing fits continue to mystify modern scholars, the story of Strasbourg remains relevant — particularly as crop failures, floods and pandemics continue to challenge us. “It was the most extreme expression of how humans behave under extreme distress,” says Waller. “I think it's a really good reminder that … how you break down is, at a deep level, a reflection of your particular cultural setting.”