Crying While Watching A Cheesy Movie While Flying? Here's Why

Science hasn’t figured out exactly why you might be sobbing while watching a cheesy movie in the air, but hypoxia and dehydration are leading suspects. 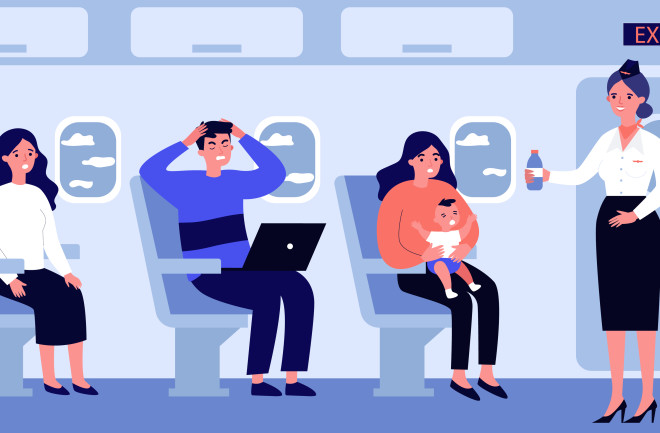 Humans didn’t evolve to fly. We can walk upright, but can we fly? No. Yet thanks to our evolved brains that can come up with innovative solutions to life’s demands, we now can fly — in machines, of course, but we’re still technically flying.

The pandemic sharply curtailed air travel, and it still hasn’t completely recovered, but according to a Gallup poll taken in 2015 (well before the pandemic), just under half of Americans had flown commercially at least once that year.

Commonplace or not, flying isn’t always a comfortable experience — and not just because of cancelled flights, crying babies and lost baggage. Flying really can mess with your mind.

Many people find that they get teary and sentimental on planes, and cry during cheesy movies, for example. Not all the emotion is maudlin, though. Altitude can bring out the attitude in some people. Aggressive behavior on planes is so common these days that there’s a name for it: air rage.

But it’s not all weeping and woe. Flying can elevate the mood as well, causing some people to truly appreciate those cheesy movies or inexplicably bond with seat mates.

Despite plenty of anecdotal evidence and Twitter confessionals, there hasn’t been much scientific research on the physical and mental effects of flying. But what we already know about the effects of altitude on the brain offers a few clues.

Perry Renshaw, professor of psychiatry at the University of Utah, studies the neurochemistry of the brain and its effects on mood. Some of his research has shown that people who live at high altitudes are at increased risk for depression and even suicide.

It’s not likely that a cross-country trip to see the family at Thanksgiving is going to make you clinically depressed, much less suicidal, but Renshaw’s research has shown that spending time significantly above sea level can play havoc with brain chemicals (such as serotonin and dopamine) that are known to play a role in mood regulation.

The mental effects of flying also don’t always stop once you’re back on the ground. Passengers often report experiencing brain fog after a flight. A 2020 study examined anecdotal reports of air travelers suffering symptoms such as confusion, cognitive decline and changes in perception — symptoms like delirium — and looked into possible causes for these phenomena. The researchers found several potential causes, but the most likely culprits were oxygen deprivation (hypoxia) and dehydration.

In healthy people, oxygen saturation of the blood is usually around 97 to 99 percent at sea level. At 6,000 to 8,000 feet above sea level, that plummets to somewhere around 83 to 85 percent. The central nervous system is particularly sensitive to oxygen deprivation, and too little oxygen can lead to the death of neurons. In young, healthy people, mild hypoxia may go unnoticed, but it can be more serious in the elderly or those with underlying conditions, the researchers note.

The low humidity on airplanes may also play a role. Humidity in the cabin of an airplane can easily be below 20 percent, while our bodies much prefer something in the 50 to 65 percent range. Such low humidity can lead to dehydration, which in turn can cause cognitive impairment.

In addition, lower humidity and lower air pressure can amplify the effects of alcohol, so what might be a relaxing drink on the ground could get you tipsy in the sky. It could also cause that post-flight fogginess.

Until more is known about the effects of flying on the mind and body, be sure to stay hydrated and avoid alcohol when you fly — and keep some tissues handy just in case that cheesy movie really breaks you up.

More From Discover
Mind
Supporting A Child’s Rapidly Developing Brain
Mind
Music Inspires Powerful Emotions On Screen, Just Like In Real Life
Mind
4 Things You Should Know About Cognitive Dissonance
Mind
Why Do We Get Our Best Ideas In The Shower?
Mind
3 Unique Ways We Can Remember The Past
The Sciences
The Vital Crosstalk Between Breath And Brain
Recommendations From Our Store
My Science ShopDiscover STEM Kits
My Science ShopDiscover 2022 Calendar
My Science ShopStrange Science
My Science ShopElements Flashcards
Shop Now
Stay Curious
Join
Our List