Can't Stop Playing Wordle? Science Might Be Able to Explain Why

Unpacking the psychological science behind the popular puzzle game that's taken the internet by storm. 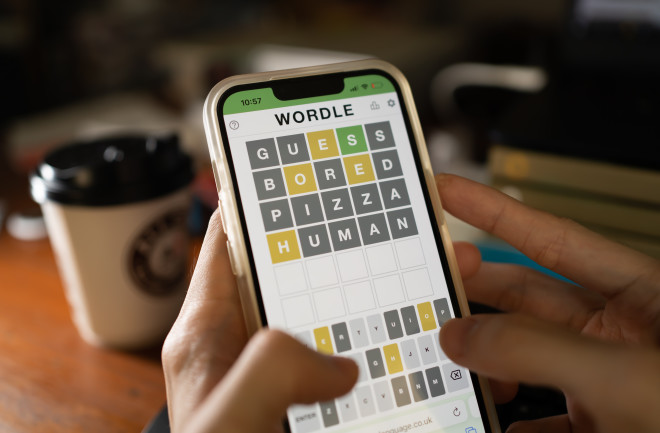 For most of January, I tried to resist. At first, the colorful grids dominating my Twitter feed were just more visual clutter to scroll past. Soon, though, I noticed that the enigmatic squares were being shared like little badges of honor. I had to know more. As soon as I guessed my first word, I was hooked.

There’s a pretty decent chance you’ve already heard of Wordle. The online game — a puzzle that tasks players with working out a mystery word — has quickly become a viral sensation, with around 300,000 players at the start of 2022. By late January, that number had surged to nearly 3 million. It’s been deemed a “drug” and an “obsession,” and was recently bought for at least $1 million by the New York Times. Wordle’s now-iconic grid has been used in ads for Domino’s Pizza and Guinness beer alike. It’s even inspired imitators, like the cheekily-named BRDL, which asks players to guess the correct “banding code,” or four-letter nicknames for birds.

The game’s concept is simple enough: Once a day, players are given six chances to guess the correct five-letter mystery word. (If you guess a letter correctly, one of the tiles in the game’s grid turns yellow; if you guess the right letter in the right place, it turns green.) The same word appears for every player, anywhere in the world.  And much like its game design, Wordle’s appeal might seem similarly straightforward — a dependable diversion for our pandemic-addled brains, releasing a rush of dopamine each time the game’s coveted green boxes pop up.

But there’s plenty more to unpack about our current Wordle craze. Matt Baldwin, a social psychologist at the University of Florida, points to a number of ways that science can explain its soaring popularity. Here are just a few of the psychological concepts that can help illustrate our infatuation with the eminently sharable game.

It Gives Players a 'Lightbulb Moment'

Baldwin began playing the game around Christmas, after it started showing up on his Twitter feed. “There was clearly some sort of secret knowledge that I didn’t have that [my peers] had,” he says. “It was a sense of curiosity, but also some sense of, ‘Well, other people in my group are doing this. I better see what it’s all about.’”

Once that seed was planted, Baldwin says that it was the game’s meticulous design that kept him playing. “As we get closer and closer to the answer with each new guess, we get a little bit more confident that we’re on the right track,” he continues. “Our brains are probably computing the likelihood that the next guess is right.” Then, when those five green letters are revealed at the end of the puzzle — even if you didn’t guess them correctly — it gives players a boost that psychologists call a sudden influx of fluency. In other words, that satisfying ‘aha!’ moment that feels so good, and that we’re hard-wired to chase.

At a basic level in the brain, this abrupt moment of clarity is fundamentally rewarding, explains Baldwin. “We know that sudden spurts of insight and creativity add to the dopamine system in the brain,” he says. “That insightful feeling really drives me, intrinsically.”

It Lets Us Savor the Experience

Another of Wordle’s uniquely compelling aspects is that a new puzzle is only offered once a day. That helps keep the experience fresh and novel, says Baldwin, and allow players to really relish the experience. “Because you know that there’s only one [puzzle a day], maybe there’s some scarcity involved,” he says. “This may be your only fun little thing you’ll do today, so maybe people savor it.”

In psychological terms, savoring refers to the process of “attending, appreciating, and enhancing” the positive things in your life. And actively practicing this process can actually decrease symptoms of depression, according to a 2012 study in the Journal of Happiness Studies. “Solidifying (or savoring) a moment can make it more meaningful,” says Baldwin.

At the same time, the game’s sporadic availability means that there’s less potential to become addicted to it. (In our current era of streaming entertainment, it’s basically binge-proof.) “Sometimes people play these games with some sense of guilt, because it’s always there,” says Baldwin, pointing to games like Candy Crush where players are constantly bombarded with notifications for new achievements to unlock. “The one-and-done aspect [makes Wordle] a scarce resource, so we know going into it that we can play it safely. It’s only going to take a few minutes and then we can get on with our day.”

It Shows How We Stack Up to Our Peers

Those gray, green and yellow boxes populating your social media feed aren’t just visual clutter — they’re a testament to the game’s built-in shareability. Since everyone is trying to guess the same answer, Wordle has quickly become a virtual water cooler, allowing players to share scores with colleagues, friends and family members with ease. In short, it creates a common in-group identity, which helps us forge stronger bonds with others.

On the other hand, it also allows us to engage in healthy competition with our peers. “Comparison is an almost inevitable part of social cognition,” says Baldwin. “And we can strategically compare ourselves to others in a way that makes us feel good about ourselves.” Like, say, bragging to your friend that it only took you three tries to guess today’s Wordle.

But beyond that, continues Baldwin, the game doesn’t just let you see where you stand relative to everyone else on social media. “Because we’re also playing with our friends, we can also feel a sense of vicarious pride when our friends do well,” he says, a psychological concept called basking in reflective glory (or BIRG). “We can see our friends succeeding, and also maybe see that we’re not the absolute worst [at the game.]”

It Affirms Our Shared Reality

There’s another reason that sharing our Wordle grids with others — and seeing them shared back — feels so good. Baldwin says it’s a striking example of what psychologists call the shared reality theory, or our need to align our own internal, subjective experiences with the experiences of others. “If I think Wordle is fun, and I shared it with my brother who had kind of the same experience, it turns that subjective experience into something real,” he says. “We want verification that our experience is similar to the experience of those we care about.”

Baldwin notes that this sense of validation might be striking a particularly resonant chord at this moment in time. “We’re all craving that,” he says. “Differences define where we’re at right now in society. It seems just impossible to overcome — can’t we agree on anything at all? Maybe Wordle is also just connecting a little bit with that strong need. If we can’t agree on masks, maybe we can at least all agree that Wordle is a fun thing to do.”